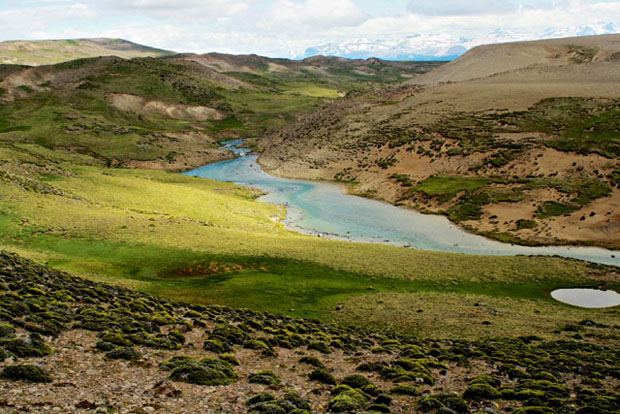 But have you ever heard of  Kooi Noom?

[dropcap]W[/dropcap]ell, I hadn’t either until my longtime angling cohort from my Idaho days on the Wood, Spring Creek, Snake and McCall rivers called last week from California to tell me about his March trip there. Jeep Ballenger is man dedicated to fishing for trouts and salmons and has probably been to most destinations that hold big, plentiful specimens.

Kooi Noom roughly translates in Telhuelche Indian language to “the way of the fish.” It is located at the end of the steppe’s of Patagonia in the foothills of Andes in the southern province of Santa Cruz, Argentina. Estancia Capitan, where Jeep stayed for 11 days, incorporates 50,000 acres of varied, rugged and wild  terrain.

Jeep said: “The property has three small lakes called lagunas and one large lake called Lago Quiroga which is on much higher elevation than the estancia itself.” “Interestingly,” Jeep went on to say: “Trout were only introduced to the lake around 2000. Amazingly, they now mostly weigh in 6- to 20-pounds, thriving on an abundance of scuds. Accessing the many inlets and outlets, which are all rich with trophy trout, can be hazardous to your health. Most accesses are very steep and very rocky.” Jeep went on to elaborate about about the many bodies of water that can be waded: lagunas, spring creeks and near the estancia lodge that hold 15- to 20-inch trout, which also has three pools nearby that hold bigger trout. The latter waters and many pocket waters can provide protection from the wind when conditions become too harsh.  Fishing these protected waters sometimes yield 20-pounders.

I asked what rugged really meant and all he could say was, “really rugged.” Most days he said they used 4 X 4 trucks to get to river pool locations and there’s a boat that holds about seven anglers when going on the big lakes inlets and outlets.

Jeep went on to say: “I did not fish the Rio Capitan, an outlet from Lago Quiroga. It descends rapidly – 200 vertical feet of drop per mile. Accessing fishable water requires Olympic caliber fitness.  The Rio Capitan eventually passes right by the lodge from the waterfall one mile below the lake’s outlet.”

What about the accommodations? I asked. “The estancia is quite comfortable, the food and wines where excellent and the evenings short due to pure exhaustion,” said Jeep.

What about flies? I asked. Jeep said: “Since the trout are always in the mood to eat, and have probably never seen a fly, you can catch a Kooi Noom rainbow on just about anything. I mainly used scuds, muddlers, a few streamers, Lefty’s included with a wide variety of colors and sizes, and Clousers – all of which were of differing sizes and color patterns”

To get to the esatancia you fly from Buenos Aires, where you should plan on an overnight. The next morning you fly to the tourist town of El Calafate where you’ll get picked up by estancia staff. From there it’s about a six and a half hour drive on both paved and gravel roads.

Jeep had a word of caution. He said Kooi Noom is usually pretty chilly and always very windy – up to a constant of 30MPH. If that creates a casting issue that you can’t overcome, Kooi Noom might not be the place for you. And Jeep added that come as fit as possible. The fishing terrain is rugged. However, he added, you don’t need to cast more than 50-feet.

Jeep recommended the following outfitter / travel company. There are others.