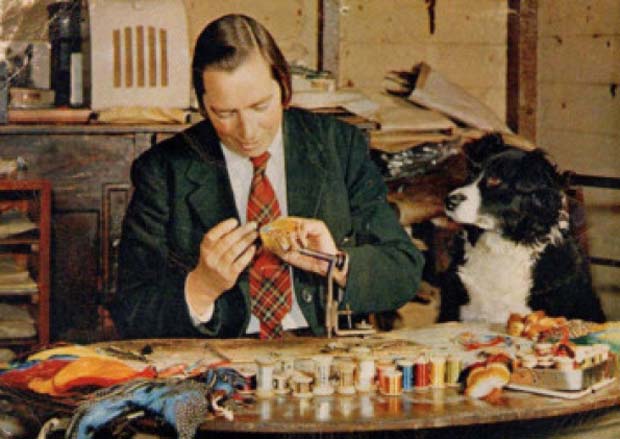 [dropcap]M[/dropcap]egan Boyd lived on the Sutherland coastline of Scotland in a village called Brora. She established herself as one of the most important salmon fly tyers of the twentieth century.

Photo from the collection of the American Museum of Fly Fishing.

By the end of the war (WWII) she made enough money to buy her own tying supplies and became a full time “fly dresser.” Most of the patterns she tied were established patterns, but later in her career she developed the popular Megan pattern.

She won the British Empire Medal in 1971.

Boyd tied salmon flies for the English royal family throughout her lifetime as well as other wealthy aristocrats from Europe and America.

Her backlog was an impressive four years out at all times. She never quoted prices, never advertised and would never turn down a visitor who wanted to learn how to tie a fly, which she always taught for free.

Her tying days ended in 1988 when she developed eye problems.

The film, Kiss the Water pays tribute to Megan Boyd’s unusual and fulfilling life. Here’s a trailer of the movie by Virgil Films.

In a cottage in northern Scotland, Megan Boyd twirled bits of feather, fur, silver and gold into elaborate fishing flies – at once miniature works of art and absolutely lethal. Wherever men and women cast their lines for the mighty Atlantic salmon, her name is whispered in mythic reverence, and stories about her surface and swirl like fairy tales. With breathtaking cinematography and expressive, hand painted animation, Kiss the Water adheres to and escapes from traditional documentary form, spinning the facts and fictions of one woman’s life into a stunning film about craft, devotion, love, and its illusions.