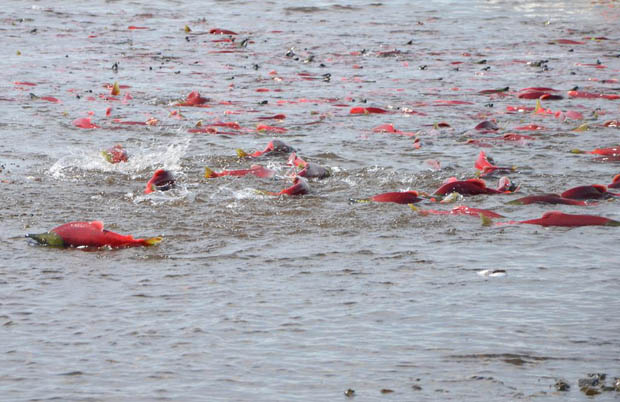 [dropcap]T[/dropcap]he fight to stop the Pebble Mine goes on — but the battlefront has moved from the U.S. EPA to the courtroom and beyond as we escalate massive nationwide pressure on Northern Dynasty Minerals, the last company standing behind the disastrous venture, to call it quits.

Over the last two weeks, NRDC ran a series of hard-hitting, full-page print ads in Washington urging the Pebble Partnership — Northern Dynasty’s legal entity — to walk away from Pebble Mine. See all ads here . . .

The EPA has confirmed that this gargantuan open-pit, gold and copper operation — along with its estimated 10 billion tons of toxic mining waste — carries catastrophic risk for Bristol Bay, its world-class salmon fishery, its pristine environment and its people.

The EPA has already proposed regulations for the Bristol Bay wilderness that would block this ill-conceived mega-mine. And hundreds of thousands of NRDC members and activists have written to EPA urging the agency to follow through with these proposed restrictions.

But the Pebble Partnership has stalled the process by filing multiple lawsuits against EPA, trying to tie its hands in court.

While this legal battle rages on, we’re holding the Northern Dynasty’s feet to the fire until EPA overcomes the Pebble Partnership’s scorched earth legal tactics and is finally able to move forward with the regulations that will effectively ban the Pebble Mine.

That’s why it’s absolutely critical that we join with the people of Bristol Bay and send the Pebble Partnership a message loud and clear: Heed the rising tide of opposition and slam the door on the Pebble Mine forever.

Please do your part to keep the pressure on by sending an urgent message to the Pebble Partnership right now — and save one of our last and greatest wild places from destruction.