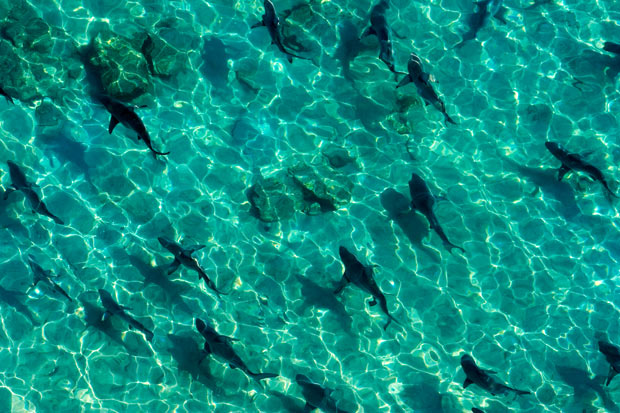 [dropcap]I[/dropcap]t’s shark swarming season and they’re on the move in big numbers in Florida.

A “shiver” (that’s what the U.S. Geological Survey calls a large group of sharks) is much closer to shore than normal near northern Singer Island in south Florida. Hundreds of blacktip and spinner sharks can be seen in a video that was taken.

George Burgess, director of the Florida Program for Shark Research at the Florida Museum of Natural History in Gainesville, said there are about 25 shark bites a year off the coast of Florida with a large majority involving blacktips. This is the time of year they head to the warmer waters off the coast. They’ll then head north for the summer. Swimmers are 30 times more likely to get struck by lightning than bitten by a shark, according to the Florida Fish and Wildlife Commission. When a shark does attack a human, it’s most likely because it mistook a human for more natural prey, Burgess said.

With this species, bites are a case of mistaken identity in which the shark interprets the movements of the human at or near the surface as being those of fish,” Burgess said. “Sharks have to make a quick decision. They grab at a splash and sometimes that splash has a human foot or hand in it.”

Burgess said blacktips, who are about 6- to 7-feet long, immediately release “on discovering that they’ve literally bitten off more than they can chew.”

There were 28 shark bites throughout the state in 2014, Burgess said.

Humans can help avoid shark bites by staying out of the water between dusk and dawn, not wearing shiny jewelry and keeping clear of areas between sandbars.