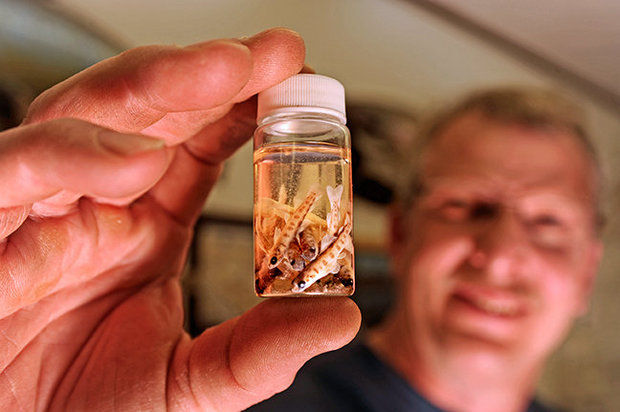 Stefan Tucker, a Belmont native who graduated in 2012 with a degree in fisheries and wildlife management, found wild Atlantic salmon fry in the St. Mary’s River while doing research on lake sturgeon for his undergraduate senior thesis.

A prized game fish, Atlantic salmon were once native to Lake Ontario but have been a stocked species elsewhere in the Great Lakes for several decades. In 1987, LSSU and the Michigan Department of Natural Resources began stocking the fish in the St. Mary’s River. The effort established a successful recreational fishery but the salmon weren’t seen to be reproducing naturally.

The DNR has recently expanded its Atlantic salmon stocking program in the state and is hoping to see Atlantics step in for the once abundant chinook salmon, which were highly sought by anglers on Lake Huron.

According to Tucker’s thesis, biologists wondered if competition from other salmonids spawning in the river in greater numbers, including chinook and pink salmon, was keeping Atlantics from thriving.

While sorting through samples in the LSSU lab, Tucker and laboratory manager Roger Greil began to suspect the fry they were finding were Atlantics. They sent a few to Gerald Smith at the University of Michigan, who confirmed it.