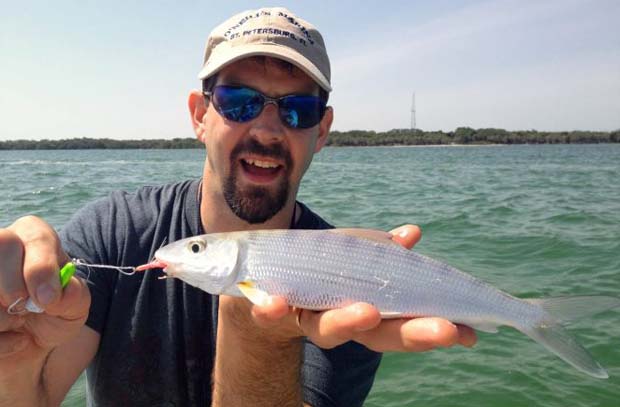 By Del Milligan / The Ledger

[dropcap]C[/dropcap]apt. Shawn Crawford discovered something unusual in the net-full of greenbacks he cast-netted in the surf at Anna Maria, FL late last month – juvenile bonefish.

“There were five tiny bonefish and three little permit in my bait net,” said Crawford, a Lakeland, FL native who guides in lower Tampa Bay, FL.

Crawford knew they were bonefish because his angler for the day was a Key West charter captain familiar with bonefish. The angler confirmed it by texting photos to another captain friend in the Keys.

Crawford surmised that they may be a different species of bonefish than those in the Keys, like there are a half-dozen varieties of snook. Apparently, they’re not that rare

Tomalin said two anglers jigging for pompano along the St. Petersburg Beach area caught and released three bonefish all about 12-inches long on back-to-back-to-back casts on Memorial Day. The bonefish, silver with a tint of blue on their backs, struck the teaser fly on the pompano jigs.

And in mid-May, two local fishermen caught a bonefish on the flats at Pinellas Point, inside Tampa Bay.

Bonefish are common to the shallow flats in the Florida Keys, usually up to about 28-inches long.

A biologist with the Florida Fish and Wildlife Conservation Commission told Tomalin that they get reports of bonefish every once in a while.

Bonefish are strictly catch-and-release in Florida.

Del Milligan has been outdoors editor at The Ledger since 1980, and the golf editor since the late 90s. Del covers fishing, hunting and all outdoors in Polk County, around the state and across the nation.