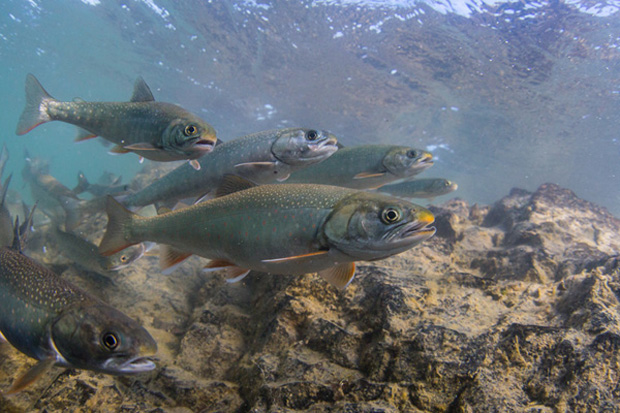 [dropcap]V[/dropcap]isit an Alaskan stream during the salmon spawn, and there’s a party going on. At least that’s the way it looks to human observers.

But when the spawn is gone, so is the food.

On Alaskan salmon streams, it’s feast and famine. Every year.

How do animals adapt to a huge glut of food, followed by an almost-complete absence? New research has found some intriguing answers – answers that happen to have important implications for conservation.

“Animals exhibit a wide variety of tactics to live in a world of feast or famine,” says Jonny Armstrong, a David H. Smith Conservation Research Fellow at the University of Wyoming.

Armstrong has led or been involved with several research projects looking at how wildlife species cope with these feast and famine cycles.

His work gives a glimpse into the complexity and wildness of a salmon stream. Here are how some animals cope. Crystal-clear water with no apparent prey.

Until the salmon arrive.

Then it’s full-on, crazy, binge-‘til-you-bust feasting for the char. The stuff of an angler’s dreams.

“They are totally egg-crazed,” says Armstrong. “Their stomachs are packed with eggs. They are beaten up and scratched from duking it out with salmon.”

The salmon die. The char remain. What do they eat the rest of the year? After all, these fish have large bodies to feed. Large stomachs require a lot of energy to maintain.

“If you do the energy calculations and the amount of food in the watershed most of the year, you quickly see they shouldn’t be able to survive there year round,” says Armstrong. “But they do.”

Armstrong and his colleague Morgan Bond found an intriguing physiological answer to the question, one that at a casual glance appears to run counter to what you learned in freshman biology class.

You may remember Lamarck, who believed that giraffes grew longer necks to reach higher in trees. Of course, Lamarck was wrong. Animals don’t grow larger appendages.

It’s different for digestive organs. Char do indeed shrink and grow their digestive tract to fit the food supply. During the salmon migration, the char’s digestive organs grow twice as big as they are the rest of the year. Biologists call this phenotypic flexibility.

“Animals can rapidly change their phenotypes to meet changes in food supply, and it’s reversible,” says Armstrong. “It’s been well documented in birds, reptiles and small mammals. We documented it in fish.”

Matt Miller is a senior science writer for the Conservancy. He writes features and blogs about the conservation research being conducted by the Conservancy’s 550 scientists. Matt previously worked for nearly 11 years as director of communications for the Conservancy’s  Idaho program. He has served on the national board of directors of the Outdoor Writers Association of America, and has published widely on conservation, nature and outdoor sports. He has held two Coda fellowships, assisting conservation programs in Colombia and Micronesia. An avid naturalist and outdoorsman, Matt has traveled the world in search of wildlife and stories.