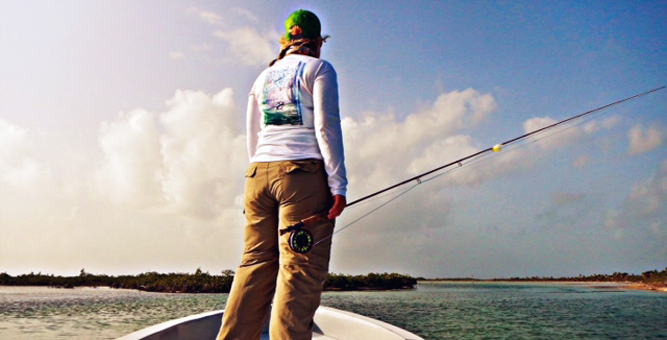 [dropcap]G[/dropcap]rowing up a surfer and angler in New Smyrna Beach, Florida, the baitfish migrations bring on a mix of excitement and anxiety for me. The excitement comes from seeing schools of menhaden, or “pogy pods,” arrive in the summer. They’re followed by the fall mullet run. The anxiety comes from knowing what follows those little fish: sharks.

Many majestic apex predators are hot on the tail fins of vital calories supplied by baitfish, including the blacktip and spinner sharks that help make the area the shark-bite capital of the world.

A tarpon vaults through a school of menhaden off a northeast Florida beach. Photo by Martin.

Every time you paddle out you know there’s a chance of getting bitten amid the big schools of bait running scared through the shore pound. Hands and feet flash just like pogies and mullet. The sharks mistake those extremities or other body parts for food. Some of my friends have scars, but most are minor.  Still, I worry about my dad from time to time—the guy I have to thank for such a “salty” upbringing, along with my mother.

Dad has surfed New Smyrna Beach daily for the last 35 years, regardless of the conditions and often by himself. He’s never had a negative encounter with sharks, except for a few board bumps here and there. We’ve mostly made our peace with those apex predators, and appreciate what they do for the ocean. I mean if you stop and think about how many people are in the water on any given day, sharks really don’t bite that many folks. On average, sharks attack about 80 people worldwide each year.

A blacktip or spinner shark attacks menhaden off a northeast Florida beach. Photo by Martin.

I absolutely hate it when I hear people say that we should kill sharks to make surfing and swimming safer. Without sharks balancing the marine food webs, our fisheries could collapse, and we’d probably just have to deal with more stingrays and jellyfish instead. Besides, can you imagine surfing and surf culture without sharks and shark stories? We’d be a lot less cool without them. Meanwhile, it’s estimated that about 100 million sharks are killed globally each year, mostly for their fins to make shark fin soup.

I guess it’s spring’s influence, but lately sharks and tarpon have moved to the forefront of my imagination. I can’t imagine a more awesome sight than a spinner shark or tarpon vaulting through a shower of pogies or mullet. Moments like those are not easily captured, but the photos accompanying this story give you a general idea of marine ecosystems in action. Baitfish such as mullet and sardines –known as forage fish – are at the base.  Sharks, seabirds, and valuable fish such as tarpon and gag grouper are at the top. These apex predators rely on the forage species as a critical food source.

It’s hard to imagine that those showering baitfish got fat mostly by eating tiny plankton and algae. They are wiggling bundles of energy that—if left in the water in ample numbers—give predators the energy they need to grow, migrate and reproduce. Menhaden are terrorized by predator fish off a Northeast Florida beach. Photo by Martin.

These baitfish migrations also set up outstanding fishing situations for some of the most majestic and economically important predators in Florida waters. The surf zone and nearshore waters produce tarpon, cobia and kingfish, as well as jumbo jacks, over-slot redfish, and of course, catch-and-release fishing for sharks. It’s a blast.

And, at Ponce Inlet near New Smyrna Beach, we are fortunate to have the world-class fishing for speckled trout and redfish in the Indian River Lagoon in our backyard. These opportunities are one reason that I just bought a new boat. My Maverick 21 Master Angler is big enough to fish outside along the beaches, and draws so little water that it’s a great boat for fishing the flats on Indian River Lagoon and the shallows elsewhere around the state.

As an angler who’s invested so much of my personal life and finances into fishing, I’m glad that over the past few years the Florida Fish & Wildlife Conservation Commission has protected numerous shark species from harvest, including lemon sharks, tiger sharks and hammerheads. And I was thrilled when I learned that in 2012 the Atlantic States Marine Fisheries Commission dramatically reduced annual catch of menhaden, which many scientists consider “the most important fish in the ocean.” Now, more menhaden are left in the water each year as food for predators which will ensure that future generations of fish and anglers will have the pogies they need to prosper. Baitfish migrations allow anglers access to incredible fishing along Florida’s beaches, even from vessels as simple as a kayak. Photo by Martin.

Still, I worry that huge losses in seagrass caused by pollution-driven algae blooms invite chaos in the food webs. We’re putting a lot of fishing pressure on declining ecosystems, which makes protecting vital forage species such as mullet and pinfish even more essential. In addition to feeding the fish that we target, many forage fish clean seagrass blades of algae and prune the grasses back so that they grow thicker. Given that forage species such as pinfish and anchovies are so essential to the health of our coastal ecosystems, it’s scary that there are few if any regulations to protect them from overfishing.

We need to be thinking and managing the state’s forage fish a lot more proactively if Florida is to remain the Fishing Capital of the World. Protecting sharks and embracing science-based limits on fishing are big strides towards protecting Florida’s coastal and ocean ecosystems. But I know that if we are to bring back the storied fishing action that my dad’s generation experienced, we must start paying enough attention to the forage fish that fuel our awe-inspiring predators. Let’s get on top of conserving the bait. Courtney Marie Martin is an artist, journalist and professional angler based in Englewood, Florida. She spends most of her free time fishing Florida’s waters and traveling on fishing trips abroad. Courtney is an active supporter of the Florida Forage Fish Campaign. Learn more about the campaign and join her in signing the forage fish pledge online . . .