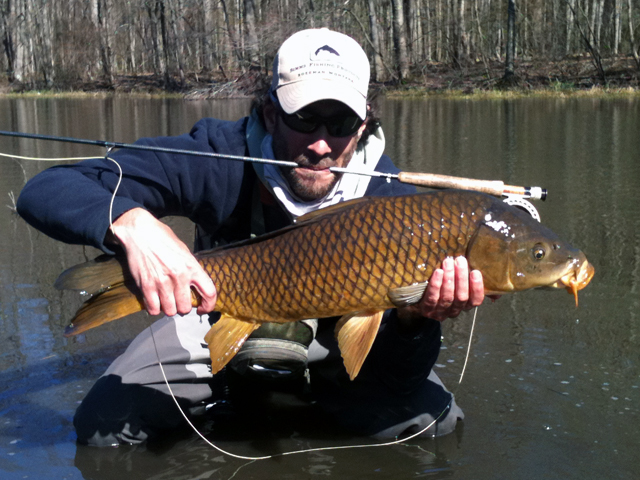 Of Interest: Fly fishing for carp a ‘berry’ good time

If the asphalt jogging path was tacky with crushed berries, Kantner stopped the car and peered cautiously around the spreading ficus trunk, looking for the ripples of fins breaking the canal surface.

A drive-by check of the first 20 or so trees yielded nothing. But Kantner finally came upon the motherlode just south of Vista View Park — a huge tree dropping berries in the water on the northwest breeze and a school of large grass carp rolling and swirling as they gorged on the wild fruit.

“It’s like what they say about asteroids: ‘It’s not if, it’s when,’ ” Kantner said happily as he broke out his 7/8-weight fly rod.

A skilled fly fisherman and respected chronicler of the sport, he began tying ficus berry flies that are nearly impossible to tell apart from the real thing.

His early “Kantner Berries” were tied with deer hair and painted magenta and worked just fine. But his latest iteration, dubbed “Otto’s Incredible Inedible Eggs” after a regular client, are 10-millimeter cork balls with a Gamakatsu SC 15 size 4 hook glued with epoxy and painted with Avon “Cherries Jubilee” nail polish. And they seem to work even better.

In a half-dozen casts under the magic tree near the park, Kantner caught and released three grass carp to about 20 pounds. He made it look easy, but in actuality the feat required a good deal of finesse.

“It has to be exactly the right size, the right color,” he said. “It has to land like a cigarette ash on the water. No drag on the fly. You screw up any part of this and you can’t catch it.”