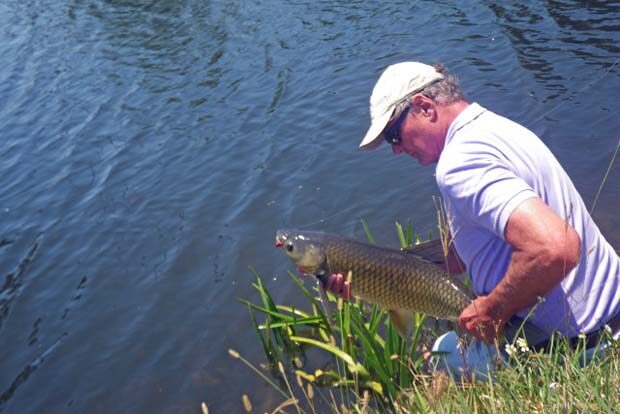 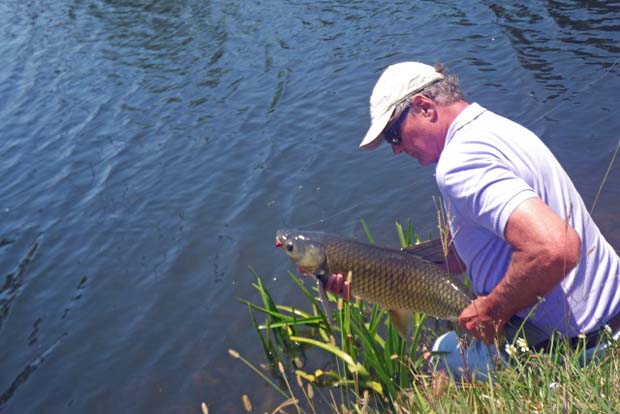 [dropcap]T[/dropcap]he grass carp is actually one of the largest members of the minnow family. The back of the grass carp is silvery to dark grey, and the sides of the body are lighter with a slightly golden sheen. The belly is silvery white. Fins are generally greenish-grey. The fish has relatively large scales. The body shape is oblong with a round belly and broad head. Teeth have been replaced by specialized structures called pharyngeal teeth (located in the back of the throat). These are used for tearing and grinding plant matter.

By contrast, common carp have a laterally compressed, robust body (deep bodied from the back of the fish to the belly) and are easily distinguished by the presence of barbels (whiskers) located at the corners of the mouth. Suckers have smaller scales than grass carp or common carp and unlike the carp have large lipped, sucker-like mouths located well below the head.

The grass carp is native to large coastal rivers in Siberia (Amur River) and China that flow into the Pacific Ocean. They are extensively cultured for food in China, Malaysia, Singapore, Borneo, Indonesia, Thailand, Taiwan, Hong Kong and the Philippines. 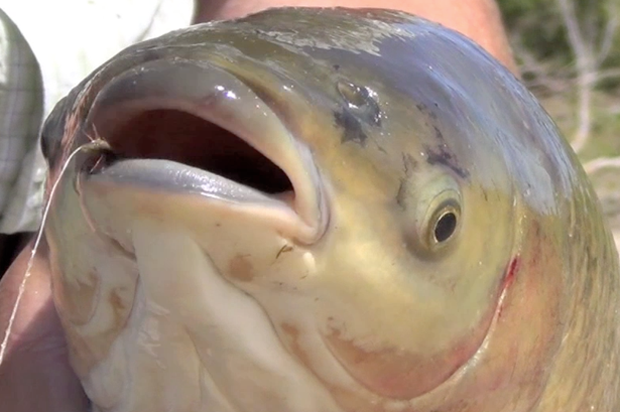 In its native range it occurs in lakes, ponds, pools and backwaters of large rivers but prefers large, slow-flowing or standing water bodies with vegetation. They are tolerant of temperatures from freezing to over 100 degrees Fahrenheit; salinities as high as 10 ppt (parts per thousand – brackish), and oxygen levels down to 0.5 ppm (parts per million).

Broadcast spawners the females lay copious amounts of eggs in free-flowing rivers that are then fertilized by the male. The eggs must remain suspended in the flow until they hatch or they will perish. Ideally, at the time the eggs hatch they will be in a well vegetated area with abundant zooplankton.

As the name implies grass carp consume higher aquatic plants and submerged grasses (rooted macrophytes as opposed to algaes); they will also eat detritus, insects and other invertebrates when necessary. Because of their feeding behavior, they are used in this country under special restricted circumstances to help manage aquatic plant problems. Many aquatic plants that pose problems in Florida are exotic and have few natural insect or disease controls, consequently they frequently create problems with access, navigation, flood control, irrigation and aesthetics. Since chemical herbicides and mechanical removal are costly alternatives that often create secondary problems, biocontrol agents, such as triploid grass carp can provide a beneficial tool. Triploid grass carp have three sets of chromosomes, instead of the normal two, which renders them functionally sterile. Triploids are produced artificially, by using hormones, stripping the eggs and mixing them with milt, then subjecting the fertilized egg to hydrostatic pressure, and finally suspending the fertilized eggs in well-aerated containers until they hatch. The resultant fish must be individually tested using a Coulter Counter, in a certification process developed by FWC (Florida Wildlife Commission) biologists prior to being permitted for use. In Florida, as in other southern states, utilize triploid grass carp  to protect aquatic habitats by restricting the use of grass carp via permits to only these sterile fish and limiting the number allowed.

The largest triploid grass carp taken in Florida was 15 years old, 56-inches long and weighed 75-pounds. In China, grass carp are reputed to live up to 21 years and reach sizes of 5-feet and 100-pounds.

Sometimes taken by anglers, especially those fishing for catfish or tilapia, but they must be released immediately and unharmed since those found in Florida were stocked deliberately for aquatic plant control purposes. Bow-anglers are especially adept at taking grass carp and are sometimes given permits to remove excess grass carp.

In some countries, the grass carp is an integral part of fish culture, and fish flesh forms an important source of protein for human consumption. The fish have flaky white meat that is not too strongly flavored but tend to be very bony.

Above grass carp biology was provided by

Catching grass carp on a fly:

A sampling of flies that work in NY state. Flies tied by Captain Vinny Catalano of Joey C. Charters 631.766.1695. Photo by V. Catalano.

Grass carp are warier than trouts. In a recent Field & Stream article, Kirk Deeter wrote that carp are one of 10 most underappreciated species to be caught on a fly. Here’s what he said: “Yep, I said it. I know some of you think carp are already overhyped, but they’re still way, way too underappreciated. I know some of you will never concede that carp are nothing more than trash fish. You’re wrong. Carp are perhaps the best species to up your fly game. That’s my story and I’m sticking to it.” It’s number 10 on his list. Deeter doesn’t distinguish between grass carp and common carp (Cyprinus carpio). Catching a grass carp on a fly isn’t a one approach fits all. Here in South Florida, catching grass carp can be best done by matching the red Ficus tree berries that drop in canals by the thousands in the spring – late March and into April – tax time is prime (See this article for how-to details . . .  ). The trick is to make sure the fly lands softly and that you’ve seen berries falling and carp reacting. Carp have really effective lateral line so a splash entry of a fly would be felt many feet away. You do not strip a berry fly, berries don’t swim. Just let it sit and when there’s a take don’t overreact – the carp will hook itself. When you feel the pull, then set hard. A 40-pound carp will have its way. The fight will be good, but not long. It most sates that have planted carp it’s catch and release only and the release an in water one. Carp have sun sensitive eyes. Grass carp do eat chironomids, callibaetis, grasshoppers, beetles, ants, damselflies, scuds and any other insects. Flies matching the latter would be small or match what is available wherever it is you’re fishing. If the carp have a nice selection of beetles that were say around a size 10, then that’s what to go with. In this scenario you do move the fly, but very, very slowly. if there’s a slight current, then just use it. Carp will take a fly just below the surface and that might be the best shot you can get.