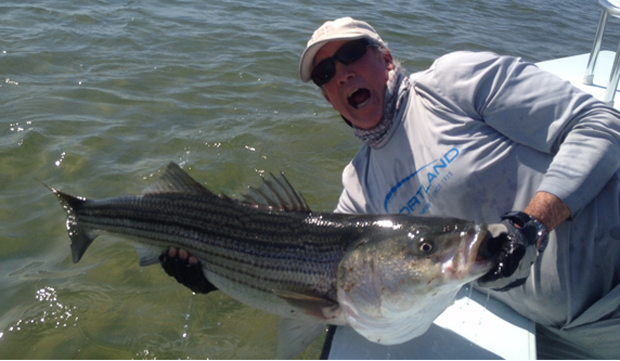 No captain has been more influential in the world of Northeast saltwater fly fishing than Captain Paul Dixon. Here he is interviewed by writer, Monte Burke, for Forbes Magazine.

[dropcap]P[/dropcap]aul Dixon grew up in California and learned to fly fish on Idaho’s Henry’s Fork. He made his name, though, about as far east as you can get in the U.S.

For two decades now, Dixon has been a top fishing guide on the eastern end of Long Island. In the early 1990s, he pioneered one of the most fun and rewarding types of fishing on the planet: Sight fishing for striped bass on the flats of the northeast. In the spring and summer, you’ll find Dixon poling his skiff on the white sand flats surrounding the Hamptons. In the fall, he moves farther east, to fish the striper, bluefish and false albacore blitzes in Montauk. And, after a brief break, he heads south for the winter, guiding clients for bonefish, permit and tarpon in the Florida Keys. Throughout the year, Dixon works tirelessly on fisheries conservation issues.

We caught up with Dixon to talk about sight fishing, the difference between good and bad clients and what it’s like to fish in the backyards of Diddy and Jimmy Buffett.

Forbes: You cut your fly fishing teeth in the Rocky Mountain West. Do you ever go back out there?

Paul Dixon: Funny you should ask. I had only been back a few times, once for a summer in 1971, and once with some friends around six years after that. After college and then marriage and kids, time didn’t allow for a trip out there. I have two boys now in college. From an early age, I would regale them with my adventures out West, in Yellowstone and on the Henry’s Fork, always promising that someday we would all go. So this year we did. I put together a trip and fished all my old haunts and some new ones, including the Madison, Missouri and the Ruby. We met up with my pals Ian Davis and Greg Fey who became Uncle Ian and Uncle Greg to my boys. They loved it so much they are begging to go back. So looks like we will be heading west again this year.

Forbes: Tell us about the first time you spotted a striper on a flat and realized that you could entice it with a fly?

Dixon: When I first came east in the early ‘80s, all I wanted to do was catch a striper on my fly rod. But by then, stripers had pretty much disappeared from eastern waters, so it was years before I actually caught one. I was told by the old-timers that you had to fish for them at night. So I spent a lot of time night fishing, and finally caught my first striper. Then one day I was in Shinnecock Bay on a beautiful sunny day. As I was blind casting from a white sandy shore, a striper came cruising by my feet. I couldn’t believe it. Then in 1993, when I was running my fly shop in East Hampton, a guy walked in one day and told me of this cliff overlooking Gardiners Bay where he kept seeing these fish flashing below in the water. I asked him to show me. So we went to this cliff and sure enough there were big flashes as fish turned sideways in three feet of water. We thought they might be bluefish. The next day I ran over there with my skiff and began poling. I was blown away. There were stripers everywhere, and big ones. The first fish we caught was 40 inches. It was mid-day. That was my real “A-ha” moment.