Of Interest: Is fish farming a good idea for Michigan?

Debate ongoing over fish farming in the Great Lakes

[dropcap]M[/dropcap]ichigan took a big step forward this summer in the business of fish farming. The state issued a permit to expand the Grayling Fish Hatchery more than tenfold. The hatchery raises trout for restaurants and grocery stores.

The expansion comes as interest in fish farming is growing nationwide and there is now talk of going offshore into the open waters of the Great Lakes.

The Grayling Fish Hatchery could soon be the largest aquaculture operation in Michigan by far.

Dan Vogler is one of the owners of Harrietta Hills Trout Farm based near Cadillac. He hopes the expansion is a sign of a growing fish-producing industry in Michigan.

“And everyone else in the state should hope so as well, the fact of the matter is that we import 91% of the seafood that we eat in the United States, said Vogler. He expressed concern about the importation and said it’s a problem that will grow with the world’s population but one Michigan can do something about. “We are a state that sits in the middle of 20% of the world’s fresh water supply and we have an opportunity to use that resource in a wise fashion to produce food,” he said. 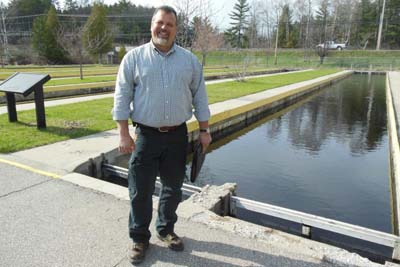 The federal government has been promoting this idea too through it’s Sea Grant program. In January, Sea Grant published a draft paper about the aquaculture industry in Michigan. The industry barely exists at the moment; sales of farm-raised fish total only about $5 million annually. But the paper suggests a billion dollar industry is possible in Michigan. That would mean large fish pens out on the open waters of the Great Lakes.

“A net-pen culture would be in the places most favorable to other recreational and leisure time activities.” — Howard Tanner, opponent of fish farming in Great Lakes

“A net-pen culture would be in the places most favorable to other recreational and leisure time activities,” he said. “They want deep water close to shore. It doesn’t mix with the sport fishery that is there.”

One of the problems with aquaculture is that fish, like all animals, go to the bathroom. That produces phosphorus which is a problem in the Great Lakes. It feeds the cyanobacteria that release a toxin, the same one that contaminated Toledo’s water supply this summer.