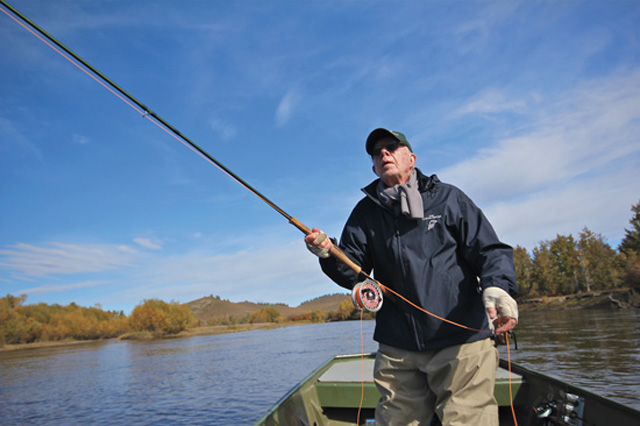 Of Interest: Jimmy Carter on fly fishing for taimen

[dropcap]I[/dropcap] first visited Mongolia in September 2001, when we met with the president, prime minister, and other officials to ascertain how The Carter Center might be of help in enhancing the democratic process there, and to see if any of our public health programs were needed by the herders in the Gobi Desert. 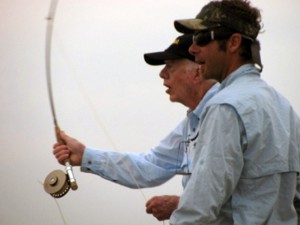 We found the political leaders very proud of their commitment to democracy, but concerned about possible excessive political and economic influence from Russia and China, their two mighty neighbors. We wanted to learn as much as possible about the country, and after a few days in Ulaanbaatar we flew to Dalanzadgad, about 320 miles to the south, in the heart of the Gobi Desert. Our goal there was to learn about the families involved in the production and marketing of cashmere wool, one of Mongolia’s major exports.

I loved Mongolia, and when we entered the Ulaanbaatar airport to fly home, I was already thinking of an excuse to return when I saw a man carrying what was obviously a fly-rod case. I asked him what he hoped to catch, and told me about a monstrous salmonid called taimen in the mountainous northern region. That trip was doubly memorable because that was the day I decided to return to fish for taimen, and the morning after I arrived home, we watched with horror as suicidal terrorists flew planes into the Pentagon and the Twin Towers.

Fishing Friends
Rosalynn and I have a close group of friends: Bob Wilson and Ineke Van der Muelen from North Carolina, Dr. Carlton Hicks from Georgia, Wayne Harpster from Pennsylvania, and John and Dianne Moores from Texas. I have fished with these companions in Venezuela for peacock bass and bonefish; for sea-run brown trout, dorado, and rainbows in various places in Argentina; rainbow trout on Russia’s Kamchatka Peninsula; bonefish and permit in Honduras; and on regular excursions to favorite streams in Pennsylvania, Alaska, Colorado, North Carolina, and Georgia.

This year we were finally able to arrange with the Vermillion brothers (sweetwatertravel.com) for a week of fishing for taimen (Hucho taimen) at one of their camps on the Eg River in Mongolia. Our quarry was the largest “trout” in the world, with an IGFA record specimen 62 inches long, and weighing 93.5 pounds.