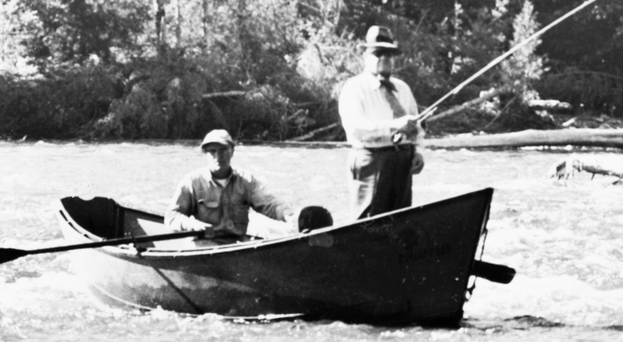 [dropcap]H[/dropcap]erbert Hoover once said, “Fishing seems to be one of the few avenues left to Presidents through which they may escape to their own thoughts, may live in their own imaginings, find relief from the pneumatic hammer of constant personal contacts, and refreshment of mind in rippling waters. Moreover, it is a constant reminder of the democracy of life, of humility and of human frailty. It is desirable that the President of the United States should be periodically reminded of this fundamental fact — that the forces of nature discriminate for no man.”

The elder Bush was a serious fisherman. He was a local fixture in Maine, fishing for striped bass and blues off of his compound in Kennebunkport while tourists snapped photos of him from the road. He caught a 135-pound tarpon in the Florida Keys with guide George Wood. While he attempted to accomplish “the pinnacle of fishing” by landing a tarpon on the fly, he resorted to a live crab to fool the 135-pounder. The 41st President of the United States also established 56 wildlife refuges during his term and has been honored with the Bass Pro Shops Lifetime Conservation Achievement Award and the Keep America Fishing award for his conservation efforts. He has long been a friend of fishermen dating back to the 1980’s when, as Vice President, he played a key role in passing amendments to the Sportfish Restoration Act. 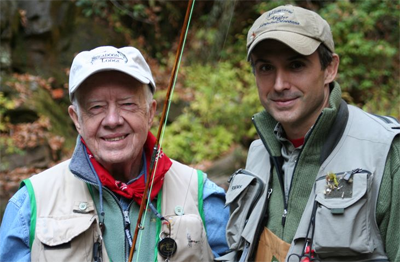 Jimmy Carter and his wife, Rosalynn, are both avid fly anglers, to say the least, traveling as far as Mongolia to pursue taimen in 2013. During his presidency, he struck up many friendships with equally presidential figures in the fly-fishing world, including Lee Wulff, Vince Marinaro, Dave Whitlock, and Ed Shenck. Camp David played a central role in the Carters’ fly fishing journey, as there was fantastic trout fishing nearby at Big Hunting Creek, and the President even held a weekend-long fly-fishing summit with Vince Marinaro and others in 1980. According to his autobiography, Rosalynn learned to fly-cast there as well, “practicing for hours casting into the swimming pool at Camp David. She had a natural talent and soon developed precise control and proper placement of the fly.”

President Carter kept an extensive collection of fly fishing and tying books in his library, figuring that little lessons learned in books and repetition on the stream earned the persistent fly fisherman the slightest upper hand in tackling tricky angling situations. Because, when it comes down to it, the trout really don’t care if you are the President or an Average Joe as long as you place the fly in the right spot.