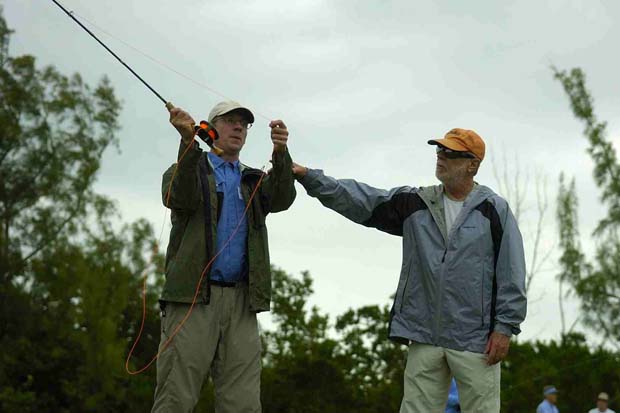 View more photos from the story

[dropcap]I[/dropcap]t is a flawless late winter Saturday morning in Islamorada, Floarida, about half an hour before the twenty-fifth-anniversary session of Sandy Moret’s Florida Keys Fly Fishing School is due to kick off. On the beach of the Islander Resort, Steve Rajeff, one of the eight fly fishing all-star instructors in that school, is already out of the gate, giving a fly casting lesson and demonstration to a group of five early-bird students.

This scenario might be comparable to Tiger Woods teaching a little group how to swing a golf club, except that Rajeff is far more preeminent at his sport than Woods is at his. In fact, it is very likely that, at fifty-seven, Rajeff has absolutely dominated a particular sport (tournament fly casting) longer than any athlete who ever lived. For over four decades he has been the unquestioned best fly caster on the planet, with forty National Casting Championships and fourteen World Championships to his credit, as well as the record for the longest single-handed fly cast ever made: 243 feet. Which is about 143 feet longer than casters who are the equivalent of scratch golfers can make on their best days, and 200 feet longer than the casts now being pushed out by Rajeff’s students.

“Try to get a little more zip in your stroke,” he says to one of them whose casts keep collapsing into the light breeze. Another, a right-handed caster, is having trouble with that breeze coming off his right shoulder and blowing the fly line into his body. Rajeff takes his rod and simply by turning his grip on it a quarter turn to the left is able to maintain a normal right-handed stroke while the fly line zips back and forth over his left shoulder, well away from his body.

Permit me a moment of reportorial disclosure here. I have been casting a fly rod with modest proficiency for over sixty years. For all of that time I have made casts in a right to left wind by crossing my right arm over my chest, thus putting those casts out of plane and disempowering them with less than a full back stroke. I was not a tuition-paying student, but had I been, I would have had my money’s worth out of this weekend before it even began.

Promptly at 9:00 a.m., in a fine big conference room at the Islander Resort, Sandy Moret starts things out by introducing himself and his seven fellow instructors to their pupils. Seated around three long conference tables arranged in a U and facing the instructors’ table, there are thirty-two of these pupils, six of them women, with an average age of thirty-five to forty, and ranging in fly rod experience from none to a lot. If they didn’t know it before, by the time Moret has finished with the introductions, the now wide-eyed matriculants are well aware that they are facing a table of Olympians—eight of the very best there ever were at what they do, owning among them (I did the math) somewhere north of 250,000 hours of saltwater fly fishing experience, up one side of the globe and down the other. What the students get first is three half-hour, perhaps-more-than-they-want-to-know disquisitions on the tools of the trade—one each on fly rods, fly reels, and fly lines. Then each of them is given a rigged set of those tools (nine-foot, eight-weight G. Loomis or Sage rods, strung with Rio lines dyed fluorescent orange to make them easy to see in the air as they are cast), assigned along with three other students to one of the instructors, and led out to the beach for the first of four hour-long casting sessions.

I go with the group assigned to Captain Steve Huff. Over his forty-seven-year career, Huff has guided his anglers to more world records and major tournament wins than anyone in fly fishing history. He is the only guide ever admitted to the International Game Fish Association’s Hall of Fame and is universally regarded as the finest saltwater fly fishing guide ever to pole a skiff. At sixty-eight, he still guides more than two hundred days a year out of Everglades City, Florida, down from three hundred days per year for the twenty years he worked in the Keys. Huff has seen a few fly lines in the air, and within minutes he has identified the problems with his students’ casting and is on the way to correcting them.

Huff has taught in every one of the Moret schools since their inception. At lunch I ask him what he has learned he can expect to accomplish with his students in two days. “I can develop their enthusiasm and get most of them casting well enough to fish,” he says. “We can tell them about the other stuff—learning to see fish, good presentation, working the fly in a realistic way. But all that takes time on the water to really learn. And the skill that takes the longest to learn is also the most important. That’s reading the shot—computing the direction and speed of the fish, its depth in the water column, the color of the water, the wind, the current, all in a few seconds, to know exactly where and when and how to present the fly. That’s the ability that separates out the very best anglers, and you can’t pick it up quickly or on dry land.”