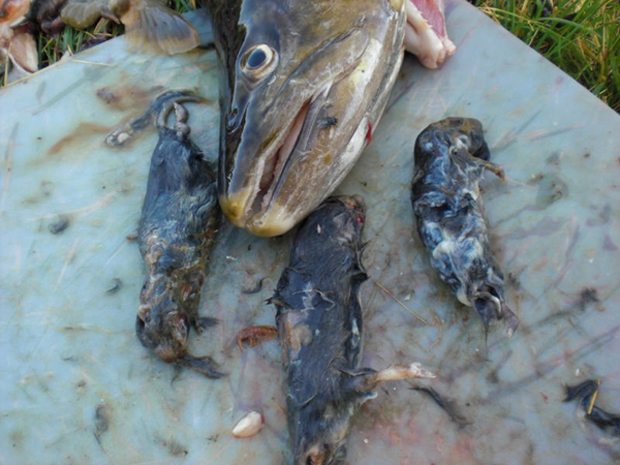 Of Interest: Shrew and vole-eating trout

[dropcap]I[/dropcap]f you’re a small mammal, it’s definitely not safe to go back in the water…

One of the most popular posts on Cool Green Science has been the story of rodent-eating trout at The Nature Conservancy’s Silver Creek Preserve. A trout research effort there confirmed that large brown trout were keying in on voles (small rodents that happened to be in the midst of a population explostion).

One trout had three freshly-eaten voles in its stomach, which seemed particularly gluttonous. Until it’s compared to this one.

Researchers conducting a trout study at the U.S. Fish and Wildlife Service’s Togiak National Wildlife Refuge in Alaska released this photo on its Facebook page last week. They wrote:

“This rainbow was caught on the Kanektok River during a rainbow trout project. It wound up being a mortality capture so it was cut open to see what it had been feeding on. Surprise! The answer was shrews, and a whole lot of them.”

By my count, this trout ate twenty shrews. Twenty.

A rainbow trout with a stomach full of shrews! Togiak National Wildlife Refuge, Alaska. Photo courtesy of the U.S. Fish and Wildlife Service.

There are a couple of really interesting points with this incidence.

For one thing, the rainbow trout was 19 inches (480 mm). That’s certainly a decent-sized fish, but as the researchers point, it’s “fairly pedestrian by Togiak standards.” It is hard to imagine a fish of this size consuming so many small mammals.

And the trout preyed on shrews, small insectivorous mammals that are interesting in their own right. Shrews are not rodents. Many rodent species – like the montane voles at Silver Creek – have periodic population explosions.

Click here to read complete story or to join the Conservancy […]

Matt Miller is a senior science writer for the Conservancy. He writes features and blogs about the conservation research being conducted by the Conservancy’s 550 scientists. Matt previously worked for nearly 11 years as director of communications for the Conservancy’s Idaho program. He has served on the national board of directors of the Outdoor Writers Association of America, and has published widely on conservation, nature and outdoor sports. He has held two Coda fellowships, assisting conservation programs in Colombia and Micronesia. An avid naturalist and outdoorsman, Matt has traveled the world in search of wildlife and stories.