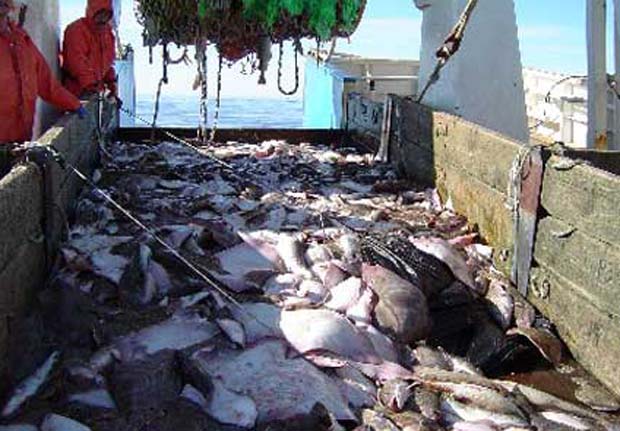 Of Interest: They’re killing them by the millions everyday

[dropcap]H[/dropcap]eaps of dead fish litter the decks of commercial trawlers each summer after boat captains pull nets from the ocean in their search for shrimp along the South Carolina coast.

Sucked into the expansive shrimp nets, small fish and other marine animals are the unfortunate victims of an industry that, for decades, has dragged the sea floor to scoop up the tasty crustaceans so many diners crave.

But one conservation group says fishermen need to be more careful Nearly half of the world’s recorded fish catch is unused, wasted or not accounted for, according to estimates in a new scientific paper co-authored by World Wildlife Fund, the global conservation organization. NOAA photo.

Every year, tons of marine animals across the country are accidentally caught in fishing nets and killed – a wasteful occurrence that threatens to deplete marine life, according to a report this week by Oceana. Similar problems are found when commercial anglers drop rows of hooks in the ocean to catch one type of fish, but bring in other marine animals that wind up dying needlessly, the report said.

Sharks and sea turtles are among the animals that die as fishermen try to land seafood for people’s tables, according to the report, which relied on federal data. Animals caught in nets or on fishing lines while commercial boats seek other species are known as “bycatch.” Oceana wants tighter limits on bycatch to help protect vulnerable species.

“Whether it’s the thousands of sea turtles that are caught to bring you shrimp or the millions of pounds of cod and halibut that are thrown overboard after fishermen have reached their quota, bycatch is a waste of our ocean’s resources,’’ said Dominique Cano-Stocco, campaign director at Oceana, a national conservation group that focuses on issues involving the sea.

The study by Oceana highlights nine areas of the United States, including three encompassing South Carolina waters, that are among the worst at killing marine life while fishing for other species. Those include fisheries that target snappers and groupers, swordfish and shrimp, according to Oceana.

“It’s fair to say that (S.C. fishermen) are contributing to the problem,’’ Oceana’s Gib Brogan said.

The study says the Southeastern shrimp trawl fishery, which includes the Gulf of Mexico and the South Atlantic Ocean, discards 64 percent of the marine life caught up in nets. For every pound of shrimp landed, one pound of billfish is tossed aside, according to the study. It also notes that thousands of sea turtles die annually in shrimp nets.

Shrimping is the biggest component of South Carolina’s fishing industry, which isn’t large by national standards but is still a notable part of the state’s economy.

Each year, South Carolina’s seafood harvest brings in about $25 million, federal statistics show. In addition to shrimping, fishing lands a healthy share of blue crabs and oysters, as well as snappers and groupers. Bycatch from the snapper-grouper fishery also was cited in the report as a problem.

No one disputes that shrimping snares unwanted fish in South Carolina. Typically, fishermen empty their nets on boat decks and pick shrimp from the piles of fish also caught in the netting. The unwanted fish, many of them dead or dying, are then pushed back into the ocean.

Still, shrimpers and several scientists questioned whether the Oceana report represents a fair picture of the bycatch issue in the Palmetto State. For every pound of shrimp landed, one pound of billfish is tossed aside, according to the study. NOAA photo.

Larry Toomer, a shrimper and restaurant owner from the Hilton Head Island area, said the state has taken steps to reduce bycatch in shrimp nets. Something must be working because sea turtles seem more abundant, he said of the federally protected species.

“I’ve never even caught a billfish in a shrimp trawler and I’ve been shrimping my whole life,’’ Toomer said. “Shrimping does absolutely nothing to billfish. And as to turtles, we have more turtles now. We don’t catch them anymore. I haven’t caught a turtle in 10 years. But I’ve seen plenty.’’

The problem isn’t nearly as pronounced as it once was – and many of the marine animals being caught accidentally are small, abundant species, said Toomer and officials with the S.C. Department of Natural Resources.

Federal rules adopted about two decades ago require shrimpers to include “turtle excluder devices’’ in nets to allow loggerhead, leatherbacks and other sea turtles to escape if they get caught in the netting. That also allows other large species, such as sharks and rays, to get out of the nets.

The study lumps Gulf and South Atlantic shrimping together, but Gulf shrimpers have been less willing to use turtle excluding devices, said Sally Murphy, a sea turtle expert and retired biologist with the Department of Natural Resources.

She and others said the amount of bycatch is dwindling because fewer people are shrimping today than they were years ago.

Despite improvements like those in South Carolina, Oceana said the issue remains a problem.

Nationally, 17 percent to 22 percent of the marine life caught by fishermen is discarded each year, the study says, citing estimates. In 2012, the National Marine Fisheries Service estimated that up to 50,000 sea turtles in the region could be killed annually by shrimp trawlers, according to the Oceana study.

“Fishermen who are required to use turtle excluder devices frequently install them incorrectly or intentionally tie them shut,’’ the report said.