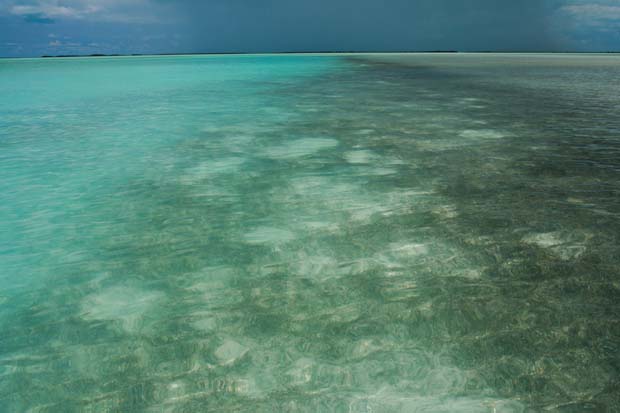 Tips & Tactics: To be a better angler, know seagrasses as a habitat

Aaron Adams, Director of Operations for the Tarpon & Bonefish Trust, is not only a marine research PhD but an avid and skilled fly angler. Reading and retaining the information he’s penned about fisheries, fish biology, prey, habitat and angling tactics will improve anyone’s batting average. His books are reference material that I go to regularly – especially if I’m destination bound to unfamiliar waters. His titles: “Fly Fisherman’s Guide to Saltwater Prey: How to Match Coastal Prey Fish and Invertebrates with the Fly Patterns That Imitate Them” and “The Orvis Guide to Fly Fishing for Coastal Gamefish.” The former tome has never left my tying desk for six years – and there’s no dust on it.

[dropcap]A[/dropcap]t its most basic, flats fishing is about being able to see the flats from the fish’s perspective. This is how the better guides and anglers consistently put themselves in the right place and time to find fish, whether bonefish, tarpon, or permit. But even being in the right place at the right time isn’t always enough. It’s also important to know how fish are using the habitat and what prey are available so that the right fly or lure is tied onto the end of the leader. Seagrass as Habitat for Prey

One of the most important flats habitats is seagrass. In some locations the seagrass beds are extensive and lush, in other locations seagrass coverage is sparse. But in areas where seagrass occurs it is an important gamefish habitat.

Tropical seagrass beds (primarily Turtle Grass, Thalassia testudinum, with some Shoal Grass, Holodule wrightii, and Manatee Grass, Syringodium filiforme) are usually located in shallow areas that are protected from excessive current and wave action. (Although Turtle Grass can grow as deep as 100 feet, it is usually found much shallower due to light requirements.) At first glance from the bow or poling platform, these seagrass beds are underwater lawns with a limited number of organisms living among the blades of grass. But on closer inspection, an observant angler will see a habitat teeming with life. Since seagrass beds are shallow and very productive areas that provide food for many species, they are attractive areas for numerous small organisms, many of which are cryptic (well camouflaged to match their surroundings) and/or very adept at using the seagrass blades for shelter. It is the abundance of small organisms – such as shrimps, crabs, and small fish – that attracts bonefish, tarpon, permit, and other gamefish. One important ecological function of seagrass is to reduce the velocity of the currents that flow over grass beds so that sediment particles carried in the water by these currents drop to the bottom.  This acts as a filter, keeping sediments from reaching reefs, and provides food for numerous organisms that feed on the microorganisms attached to the sediments and on decaying plant and animal matter (this collection of sediments, plant, and animal matter is called detritus).  In addition, seagrass supports a diverse array of algae and invertebrates that attach to the surface of the grass blades.  In turn, these organisms fall prey to grazers and predators, and in this way the productivity of the seagrass beds supports the food web that brings bonefish, permit, tarpon, and other fish into the shallows.

Tropical seagrass beds support an incredibly high diversity of species of fish, crabs, shrimp, copepods, amphipods, worms, algae, urchins, and a host of other organisms that are gamefish prey.  The abundance of species, or even the types of species found in a seagrass bed may change among locations, so although the general list of prey items may be similar, the favored prey items will likely vary.  This, in part, explains why some flies are pounced upon by fish on one seagrass flat, but completely ignored by fish in other locations.  In addition, abundance and presence of potential prey items changes seasonally due to factors such as temperature and life cycles of these prey species. For example, studies of bonefish diet show that most Florida bonefish had crustaceans in their stomachs, while clams were most frequent in stomachs of bonefish from Puerto Rico.  I found similar differences in prey preferences for permit in the Virgin Islands.  On St. Croix, U.S. Virgin Islands, where permit come into shallow seagrass beds that are mixed with coral rubble to feed, they show a preference for small clams and small sea urchins.  However, in the nearby British Virgin Islands, where permit are most often found in shallow seagrass beds that are intermixed with sand flats, crabs and shrimp were high on the permit menu.  These differences in diets of bonefish and permit among locations is most likely due to differences in the abundance of prey items.

However, we can use our knowledge of the general makeup of communities found in tropical seagrass beds to generate a list of types of prey items that will most likely be present on any seagrass beds you might fish, and give you a head start on deciding which flies to put in your fly box.

In next week’s coverage Aaron Adams covers PREY and FLIES. Join the Bonefish & Tarpon Trust and become a better angler for it.

NOTE: For more coverage on the value of seagrassses – go to The Nature Conservancy and read Marty Downs’ interesting points of view on the subject.