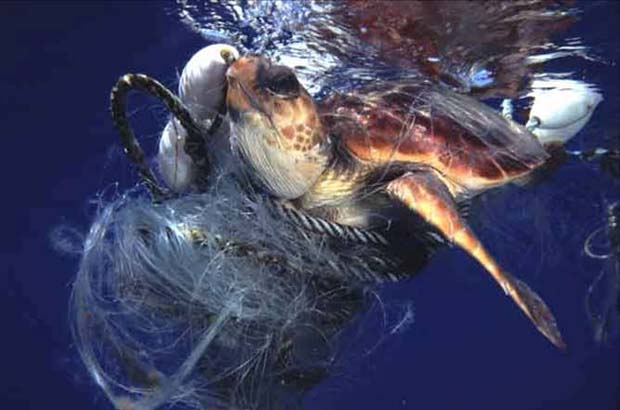 Of Interest: What are prospects for a biodegradable fishing line?

A follow-up interview with Eagle Claw (Wright-McGill) employee named Steven, retail sales at their Colorado headquarter store, confirmed that they no longer sold Bioline. Asked who made it, Steven said that Eagle Claw was the patent holder of Bioline, but discontinued making the line. He further stated: “We have no foreseeable plans to restart.”

When queried about who does make it? Steven replied: “Nobody makes it.” He was not forthcoming about why they abandoned production. However, it’s advertised feature might have been it’s undoing, especially so if they could not control the decomposition rate – even when dry or in a package?

In addition, it’s cost was equivalent to fluorocarbon or 3 X that of monofilament. The Pacific Garbage Patch is estimated to be larger than Texas, but its boundaries constantly shift due to currents and wind. In addition, plastic particles the size of a pin-head are constantly being ingested – killing fish as big as a whale.

Biodegradable fishing line is made in Japan

Although it’s fishing line hit the world market back in 1996, no one has stayed the course. Presently, FieldMate products cannot be purchased outside of Japan, and only from Toray.

FieldMate is made from a biodegradable polymer, decomposes via applied microorganisms. However, it does not deteriorate when kept clean and dry, but does when exposed to the biological activity of bacteria underwater or underground. After about three months in salt or fresh water it’s gone.

No costs are posted by Toray, but the diameter line tests are. There are only few.