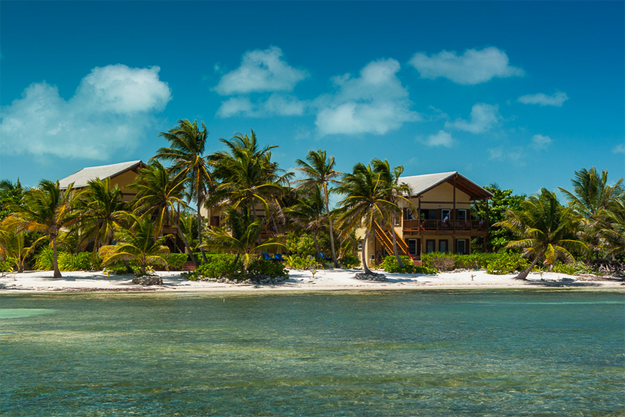 Off Belize, a hunt for saltwater fly fishing’s top prizes

El Pescador, the lodge, has been a top destination for me and angling friends for as long as I’ve cast a line, and that’s a long time. What has been the attraction? Easy to get to, English speaking, safe (although for a while there were drug banditos buying Ambergris Caye real estate), great opportunities for a slam: Spookus easyus, Buttkickus fishus, Nobiteus permitus… that would be bonefish, tarpon and permit; superior guides, great equipment, comfortable accommodations and remarkably, over the decades of visits and different owners, the food and staff always exceptional.

[dropcap]“L[/dropcap]ook big school,” my guide, Emir, said. He was pointing to a spot 50 yards in the distance. The surface of the water was churning, black tails poking up like so many miniature sails. “Hop out,” he said.

We slid over the side of our skiff and stood in the knee-deep water. It was the first half-hour of the first day of a three-day fly-fishing excursion to Ambergris Caye, a small spit of land just off the east coast of Belize, and already Emir had led us to a sweet spot. A swath of emerald-green Caribbean lay in front of us. There wasn’t another boat in sight. The early-morning light was like something Hemingway would wax literary about.

Emir nodded toward the group of fish. “It’s two schools,” he said and began walking toward one of them. Saltwater fly-fishing is more like hunting than fishing, really. It’s not about dropping a line in the water and crossing your fingers. The object is to navigate a promising expanse of water until you spot a specific fish or group of fish, the way you would traverse the woods in search of deer or elk. Then, once you have a target, you “sight cast” to that particular fish.

I followed a few feet behind Emir as quietly as I could, but after a few steps, the school apparently sensed us and darted left. When we chased them in that direction, they shifted back to the right. The pattern repeated itself maybe a dozen times, with Emir and me shadowing the wandering mass this way and that way across the flat. Eventually, we crept to within about 40 feet of the fish, and Emir issued a gentle command: “What are you waiting for?” 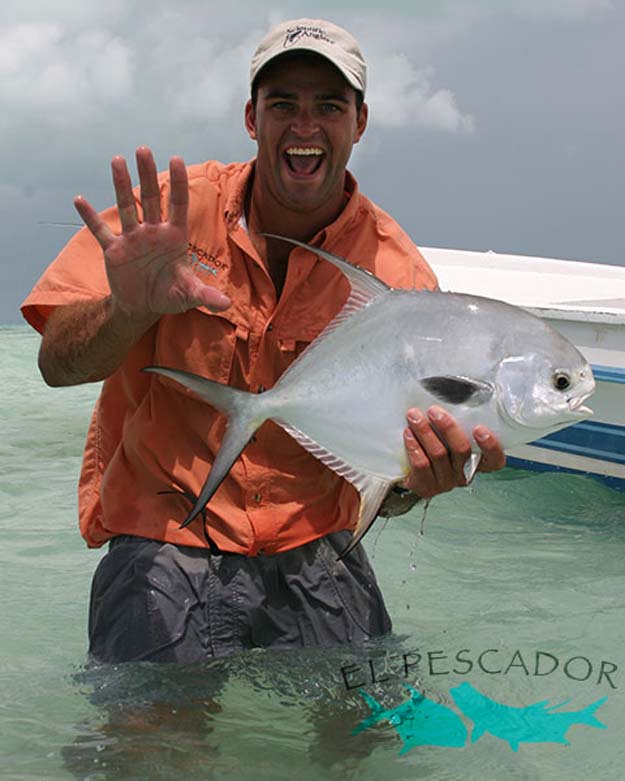 I took my first shot. Short. I cast again, a little closer this time, and stripped, or tugged, my line back toward me to make my fly, an imitation shrimp pattern, look like the real thing. Still no takers. After several more attempts, Emir asked me to bring in my fly. “Sometimes when the tide is up like this, they like something a little brighter,” he said. He tied on a flashy orange-and-green variation called a Christmas Island. “Go again.”

A few attempts later, my fly landed more or less where I wanted it. “Leave it,” Emir said, “He’s coming for it.” I could hear the excitement in his voice. Then: “Set! Oh, that’s a nice permit!” he said, referring to a game fish common to these parts.

My reel whizzed, the fish sped for the horizon, and after 15 minutes of giving and retrieving line, I had him in hand. Emir snapped a picture, and we released our quarry.

You’d think I would have been elated, and I was. A permit is one of fly-fishing’s most sought-after species, and this was the first one I had ever landed, a beautiful, healthy six-pounder. But that fish was just a start. I was still only one-third of the way to bagging the prize I was really after — a saltwater fly-fishing Grand Slam. 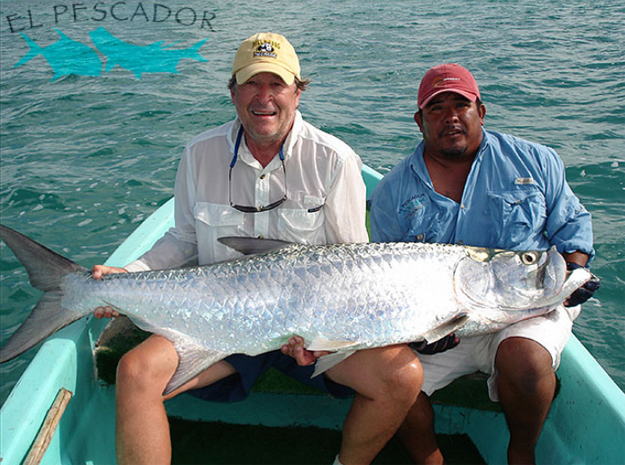 A nice El Pescador poon – they are believed to be from a different tribe than those wondering the Keys each spring. In Florida, you cannot lift a tarpon out of the water like this, but she’ll be OK. Lodge photo.

There is no official definition of the feat, but a Grand Slam loosely consists of catching three of the sport’s most coveted prizes — bonefish, permit and tarpon — in the same fishery, on the same day or trip. It’s a badge of honor, a miniature version of climbing the seven summits, only without the subzero temperatures or hypoxia. Where some purists see an arbitrary nonachievement, others see a fun and worthy goal. Those who fall into the latter camp would be hard-pressed to find a better place to pursue a trifecta than El Pescador Resort on Ambergris Caye. 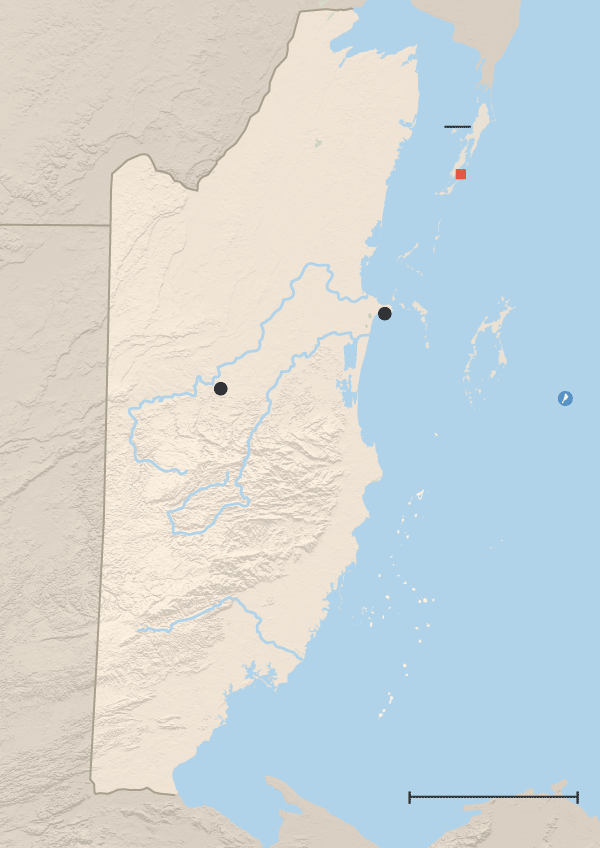 Located on the island’s east side, El Pescador offers access to some 400 square miles of shallow hard-bottom, white-sand flats, stretching from the Mexican border in the north to Belize City in the south. Set against a small, pretty stretch of sand, the resort’s Caribbean-chic rooms are simple but comfortable, and the local- and seasonal-minded dining is far better than it has to be.

But it’s the fishery that draws anglers from around the world. Big schools of bonefish, a thriving population of permit and both resident and migratory tarpon all ply these waters, each offering its own challenge. Bonefish, ranging from two to 10 pounds, are notoriously difficult to spot (hence their nickname: “the gray ghost”) and take off like piscine torpedoes when hooked. Permit are sleek, iridescent beauties that typically weigh from five to 20 pounds and pull like small locomotives. And tarpon are prehistoric-looking bruisers that can grow as large as 200 pounds and take an hour of arm-burning combat to land.

When I spoke to El Pescador’s owner, Ali Flota, before my trip, she was downright confident about my chances of catching bonefish and perfectly optimistic about my odds of landing a permit. When I asked about tarpon, however, her enthusiasm waned. Catching one was by no means out of the question, she said, but some anglers dedicate five or six whole days to that species alone, and still come up empty. “I wouldn’t call that one a guarantee,” she said.

NOTE: Featured Image was taken from in front of the lodge. Image courtesy of El Pescador Lodge.

Direct flights to Belize City are available from major cities in the United States, including Houston (IAH) and Miami (MIA). From there, flights depart regularly to San Pedro, Belize (SPR) near Ambergris Caye, Belize.