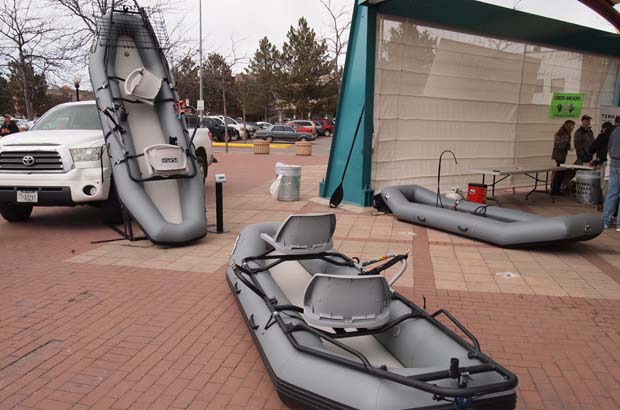 Opinion: Inflatables may not be pretty, but as a fishing tool hard to beat

[dropcap]A[/dropcap] fishing “boat” has a simple function, access places safely that you could not get to before you owned it.

There are lots of reasons to like skiffs, kayaks, canoes and the myriad of other uniquely engineered concoctions that deliver us to and from the captivity of a couch, river bank, shoreline, dock or pier. None, though, in my opinion, meet my rather odd criteria of ‘hosting’ like an inflatable: easily fished from standing, light weight, highly transportable, and not tip prone. It can be paddled, rowed or motored to formerly inaccessible places, and packs away (I mean away). Oh, and not big bucks and plenty durable with only minor maintenance a burden.

Inflatables, as most know, have been with us for decades and have seen extensive service as yacht tenders and are required equipment for water ditching protection onboard commercial airliners, military aircraft, naval ships and cruise ships. They have also been the conveyance of choice for ‘rapid’ river outfitters for more years than I can remember.

Fabrics, like many other products, were pressured to meet new performance standards by NASA. The outcomes of those demands were world leadership in technologies and a national bounty of new products

For inflatables, fabric tear and puncture strength, abrasion resistance, waterproof characteristics, adhesive options, long term wear, and stitch-ability are some of the performance considerations. Today, fabrics used in the design and build of inflatables are almost indestructible, a far cry from the raft fabric that Louis Zamperini and his two fellow B-24 aviators survived in during the campaign in the Pacific against the Japanese in WWII (Unbroken by Laura Hillenbrand).

Today, inflatables used for personal fishing conveyances are almost all made with the design signature of conventional drift boats

Again, there are only a few inflatables that have distinct built-in design features that make them great fly fishing vessels: only weighing around 100-pounds, providing portability in or atop almost any truck or SUV without needing costly rigging equipment or a crew. In addition, they are legally deflatable (sorry Tom) for closet, garage or trunk storage is a huge advantage for metropolis-ites and apartment dwellers. However, the reality of deflating and drying before put-away is a pain in the arse. Both inflatables we review here have hardened aluminum tube framing for stiffness while seated, rowing or standing. Too, high view observation while underway outshines all self-propelling watercraft. And, the stand-up feature makes its own case for being highly preferable over any self-propelled, sit-in watercraft.

Having the triple threat options of being propelled by oar, canoe paddle or small gas or battery powered engine gives inflatables another edge, in my opinion. For example, you can leisurely drift down river and stop to fish inaccessible pockets denied boat entry, cruise a lake’s perimeter and anchor to fish small feeder streams, and fish the water depths allowed by tidally governed flats or marshes – all with the knowledge that you can power back up river, cross a lake or beat a tide.

The best benefits of the inflatables we profile, as I see it, are ease of getting into and out of; portability to, from and out of the water, and gear stowage.

Are there cons? Yup

Are they puncture “proof?” No, but it is fairly rare that a there would be a puncture … let alone devalue a trip. Why? Because they both have easy to use puncture kits (if you had a bike as a kid you already know how to use that kit). And lastly, the reviewed inflatables have multiple chambers – one puncture deflates only one cell – you’re still afloat.

Never raft fast moving water with a hard bottom inflatable. Think flip or tear, or both.

Wind is the natural enemy of an inflatable so you do not want to be caught in open water when an afternoon storm pops up, that’s not open water like ‘ocean’ – think big rivers, especially lakes and even shallow water impoundments.

Inflatables all “push” bow water making paddling or rowing labor intense – especially not fun on lakes with wind against.

Hot summer storm winds racing over warm water in a shallow lake can create big time wave action and shore-pileups of water on the lead side of the wind. That may me be a problem if that is where you’re seeking shelter. In what sometimes seems just minutes a beach can literally disappear.

Open water wave sequencing in shallow lakes, the time between waves, is about 1/3 that compared to ocean waves. And, yes, that is a big deal.

Many ‘class rated’ rivers are relatively safe to navigate with the fishing rafts we’re profiling but if it is a “tailwater” river – meaning it is subject to dam releases by the Corps of Engineers -Uh-oh. Pay attention. Drownings are not rare during releases due to a lack of understanding water release impact or underrating the threat. Too, the variable of “how much water” being released can also be significant. For example, a few inches released is not the same as a multi-foot level release – going from just noticeable to capsizing your vessel.

No, on big box, discount store inflatables. A $200 inflatable listed as serviceable for two – three anglers is going to be nothing more than a loss, dangerous and a short-lived product at best. Stick with made for the use you intend to use it for like the two we’ve profiled. They each took years to perfect, the owners invested in lots of design and engineering, and their inflatables passed safety tests and list specs.

Hard bottom inflatables have only one use, a pond or a lake. In a river with variable flows, a hard bottom could easily hang up on a boulder or stump and in seconds flip over, or suffer a puncture. A soft bottom will undulate over obstructions – go with the flow.

Skilled white water rafters will gladly take on Class III water (with a bailer at the ready), but if you are not a pro don’t gamble.

The fabrics of most inflatables are negatively impacted if put in freezing water, especially if the fabric is not already cold when placed in sub-freezing water. Avoid this scenario – protect your investment.

Last but not least, you are not being a nice guy by adding too many people on board. It is dangerous to overload these vessels.

There is only wiggle room between the stated performances of FlyCraft USA and SmithFly Shoal Draft so we leave choosing up to you. Just click on image and link to their respective sites for specs, videos, action photos, and more. 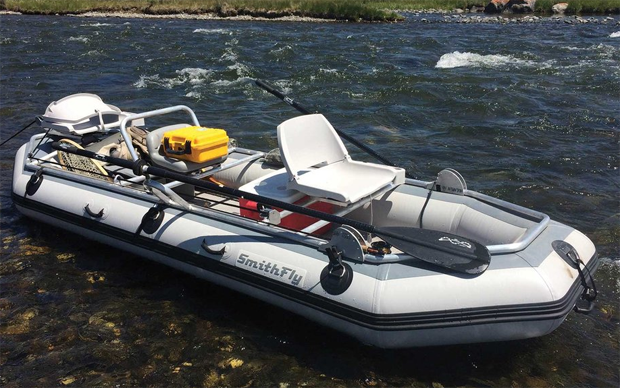 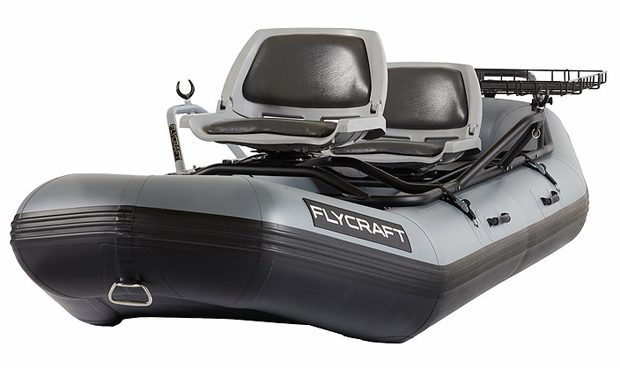