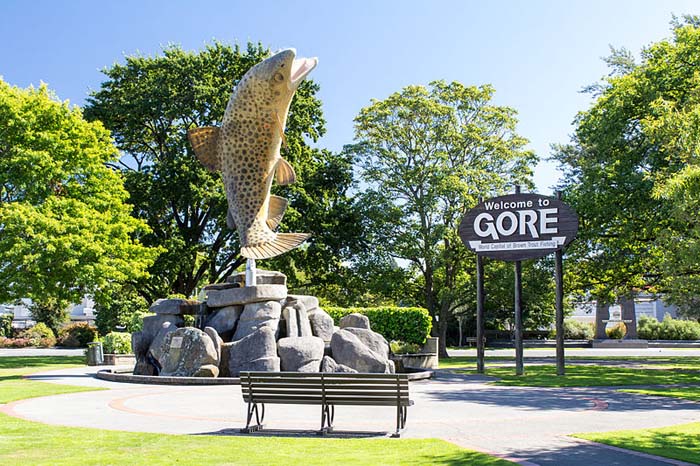 Photo Gore, New Zealand, by Oren Rozen – a commons image. I stayed here for about a week, fished a river that ran through a sheep station so, the water was private. I caught more trout in that week than seemed humanly possible – some spans of time hooking a fish on every cast. The largest, according to my guide, a 5 kilo brown [11-pounds], but there were many in that league in New Zealand.

In 1991 New Zealand, boys and girls biking from school with fly rods was as common a sight as our yellow school buses clogging the roads

[dropcap]I'[/dropcap]d been warned about noise, what trout can hear, and how to traverse the benthic compositions of New Zealand waters by Paddy Clarke, my first guide in NZ. He managed a 35,000 acres sheep station on North Island near Taupo.

During our hour-long drive and two-hour walkabout on the sheep station, we’d passed up or forded several inviting streams in his vintage Land Rover that had no springs – my arse and spinal cord serving that purpose. Our destination was a river [forgot name] that was the border dividing the sheep station and thousands of acres of indigenous Maori lands. We would fish a single tributary of the hundreds that fed the shared border river.

It was January, like northern hemisphere June but down under [yes, the toilet flushes/drains the other way], and I was sure I knew more than most about freshwater fly fishing for trouts. Then, things happened, and I got exposed to reality, and my prior experiences in my home state of Pennsylvania and destinations like Montana and Argentina seemed parochial. It turned out I hardly knew anything, and some of my mentors, read or known, didn’t know that much either.

That undoing trip down under to New Zealand lasted an entire fishing season of more than five months. New Zealanders, BTW, are the most hospitable people I have ever known. And saying, “I just had three beers.” – Means you’re inebriated – alcohol rich beer.

I met Frank Murphy, Paddy Clarke, the inimitable Hughie McDowell, and numerous other fly fishing guides. Many of whom were European tournament fly fishers, as well as Commonwealth tournament anglers. All extraordinary anglers and fly tyers.

Hughie McDowell tied innumerable number #18s and smaller dries for me using only his two hands with thick blacksmith fingers. Tools: a hook, some deer hair, and thread while standing in the water facing a stiff breeze – never saw anything like it before or since. He was also the fly fishing champion of Ireland.

Passing the time we squared off occasionally for a target game – 30/35-feet away. Hughie could hit the target, repeatedly, after one to three false-castless tries – never beat him.

The New Zealander guides in the ’90s were better than most US freshwater guide counterparts, in my opinion. However, I don’t believe the disparity of guide scholarship exists today. 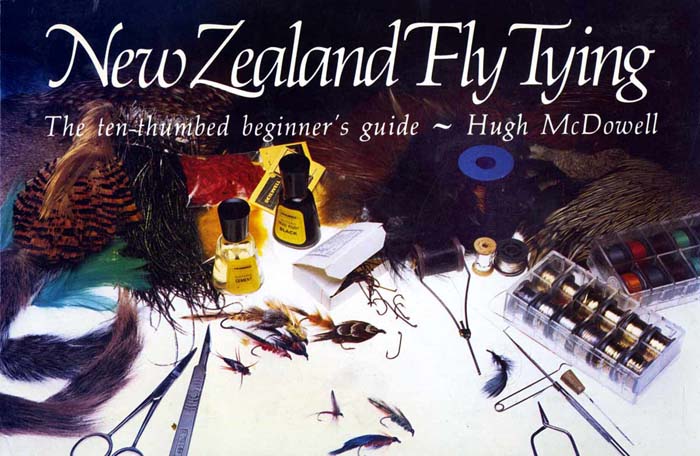 Almost every fly in this book is bankable here in the US and, obviously, all in New Zealand. More modern materials can be used, but that’s not necessary.
Click on book cover to view.

WHAT DO FISH HEAR?

Water has a density greater than air; around a thousand times denser than air. Sound in the finned environment travels about a mile a second, or roughly five times faster than in the air. So, the importance of sound to the survival of a trout has, over the millennia, lead to unique ways to detect “sound.”

Hearing – you can’t be serious; cleats?

WHAT THE ANGLER NEEDS TO KNOW ABOUT TROUT AND SOUND

Putting cleats on wade boots is ridiculous, and mulling over the type of metal, shape, and attachment design that is best is like arguing over which type of cup improves drinking “hemlock.”