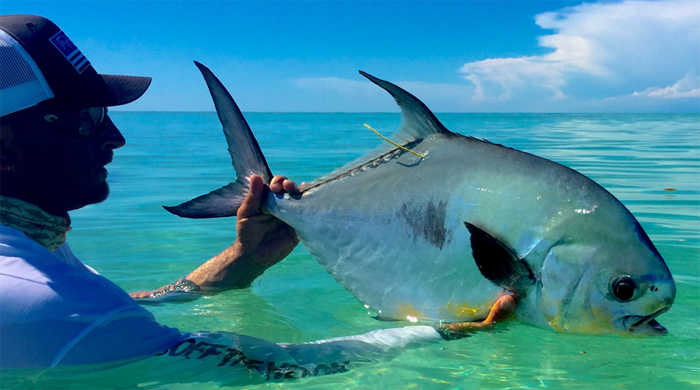 Permit are hard to entice. This rudimentary crab fly has fans

Permit (Trachinotus falcatus) is found Western Atlantic: Massachusetts to southeastern Brazil, including Bahamas and many of the West Indies. Reports from Africa are based on misidentifications. The IGFA world record permit is 41-pounds and caught in the Florida Keys. In March of 2016 in collaboration with FWC and the Lower Keys Fishing Guides Association, Bonefish & Tarpon Trust began tracking permit movements within the FACT Network. Tracking data quickly showed that permit were aggregating at spawning locations in April, prior to the harvest prohibition period. Pictured is fishing guide Rob Kramarz holding a tagged Permit on the flats in the Florida Keys. Photo Credit: Jake Brownscombe.

[dropcap]M[/dropcap]y friend Angie Roth asked me to tag along on a Saturday trip to Gary Merriman’s Atlanta, Georgia fly shop, The Fish Hawk. She wanted to talk catching permit and baby tarpon – specifically the flies for her upcoming Holbox, Mexico trip with her sister who would be flying in Friday. She added. “Would you mind picking her up at Hartfield.”

Because I’d be the dog sitter for Daisey while away, she promised lunch at upscale anywhere I wanted on the South’s most famous street, Peachtree in Atlanta. It would be a $250 lunch, and I’d be the designated driver since I don’t drink, and the ladies love top-shelf vino.

Angie and her sister ended up buying what was recommended by Fish Hawk’s Chad Bryson, but only one or two each of five flies – hardly enough, but all good choices. I knew what was coming. She’d want me to fill out her, and her sister’s order of a few dozen look-alike flies of the two I had good luck with in the Bahamas on bonefish and one eat by a permit out of a dozen shots in as many years.

I hate tying flies with sections of material and rubber legs in between, like crabs

I cruised the internet leaning toward the more famous tyers like Popovic, Flagler, InTheRiffle, Ruben Martin, April Vokey, and others, but after some false starts because of being more like a nose tackle at tying than a skill position player like those mentioned, I stumbled on a crab tie that was in my league of paint by the numbers, not like Claude Monet. The gift of easier was in EP (Enrico Puglisi) Wide Brush. It solved dozens of other related problems and added large to my tying.

I was able to fill Angie’s and her sister’s fly boxes with many colors and many sizes of crab flies while avoiding a visit to a psychiatrist’s couch due to rubber leg burnout.

The tyer is Capt. Chris Myers, Orlando, Florida area. Myers is an excellent tyer and like any good tyer who fishes for a living, there’s no need for art or decorous frill on his flies nor adherence to past practices. Chris is about move it…