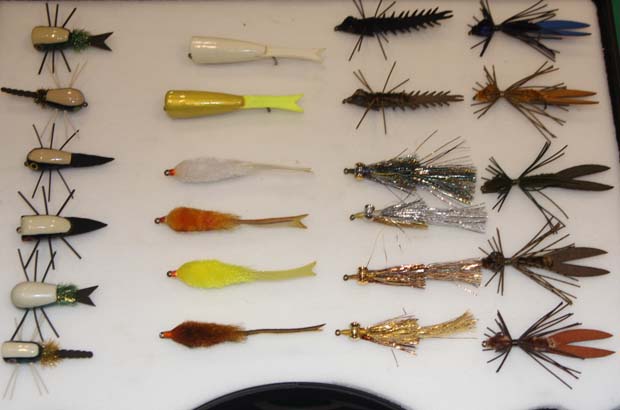 Profile: Chuck Kraft on flies that score big in your away games 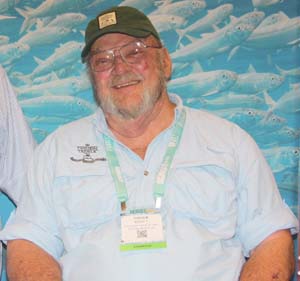 [dropcap]F[/dropcap]rom our conversations since meeting in July at the 2016 ICAST Show in Orlando, Florida, it has become evident to me that Chuck Kraft spends much of his time figuring out what trouts, carp, smallmouth and largemouth bass eat? And what hook sizes and materials give a fly the look that initiates a bite because it has the correct ambulation and silhouette, and in some flies, the wounded swimmer look? Is Kraft a rookie phenom? No, no, no – try two months shy of 30 years whose mark was made in a big, mixed neighborhood of rough and tumble pescadoes.

As a guide, Chuck fished a long list of who’s who clients regularly challenging the New River waters near its West Virginia border crossing into western Virginia. They all came to fish with Chuck Kraft because he was the only fly fishing guide (for decades) and made the fishery regionally popular because of his due diligence. Later, ‘when they came’ (other guides) he remained the only one who knew anything about catching big smallmouth bass – the fishery’s prospector gold nugget.

Always refreshing. He is not guilty of an isolationist’s views on casting, flies, fly rods, fly reels, fly lines or leaders

Kraft spits everything out in plain and simple terms, but in the nicest way, saying things like: “Stop collapsing your wrist.” Or maybe: “You need to add one more dubbing wrap here.” Or maybe: “Leave it alone, swim it from right there.” And sometimes: That’s a nice rod, leave it in your car. You can use mine.”

Kraft has followers, but he is not a follower. He has always taken the fork less traveled

His position on fly rods: “They have to be designed to catch fish, cast comfortably short and out there when called on. A rod that can only cast a mile is not the best fish catching rod, nor is the angler who believes distance is his only friend.

His position of flies? Well, that would be hard to describe because so many of his patterns run contrary to conventional thought on size hooks, matters of flash, and non-conventional tying material choices.

The New River, the origin of Kraft’s knowledge, is about as diverse a fishery as one could imagine

To say the New River is full of fish is not to exaggerate in the least. It is full of catfish, carp, trouts and the best there is in Micropterus dolomieu. The flies he developed for these pescadoes was the key to his succeeding in that fishery, which he gladly shares today. But the better news is that most all of his New River flies travel well.

I can attest to transitory successes of kraft’s hand tied in Georgia: carp, largemouth bass, brookies, rainbows, browns, hybrid stripers and a smattering of several other worthy opponents like bluegills and crappies.

Kraft’s stock–in–trade has always been figuring stuff out, but he never over-intellectualizes how he got there

I was gifted a dozen of Chuck Kraft’s original fly designs – all tied on hook sizes of his choosing for the waters and species I told him I was going to fish in Georgia: fast water, lakes, still water and coastal marshes: (largemouth bass, hybrid bass, trouts, panfish and the State’s best saltwater game fish, the protected Sciaenops ocellatus).

You will probably not be able to find any of the following patterns in your local fly shop. I have not seen any patterns here in the Atlanta area that reveal any DNA connection to Chuck’s patterns.

On my walk through before undertaking the waters I’d fish, I wanted the opinions of a few of Atlanta’s fly shop owners and guides shown the Kraft selection. They responded acapella: “. . . those will never work here.” I will have to admit that initial pooh-poohing created doubt.

Here they are. Keep an open mind and you will be rewarded on earth if you venture off with these odd patterns 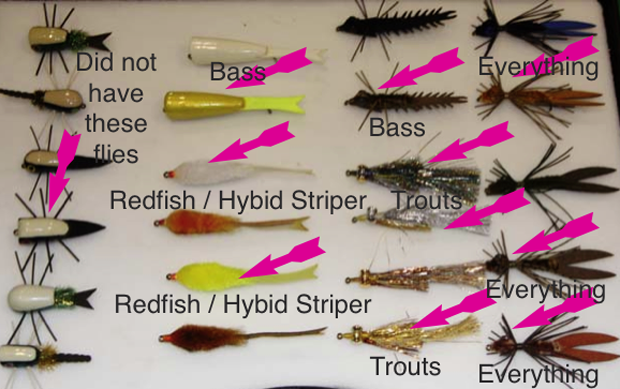 My reaction was probably the same as yours, especially for the trout patterns – over-the-top flash in gold and silver go figure? This fly pattern is the hottest ticket on the Madison River in Montana! Hook sizes vary on 2, maybe 3X long shanks. Go to ETF for recipes and nomenclature. Click on image to visit site.