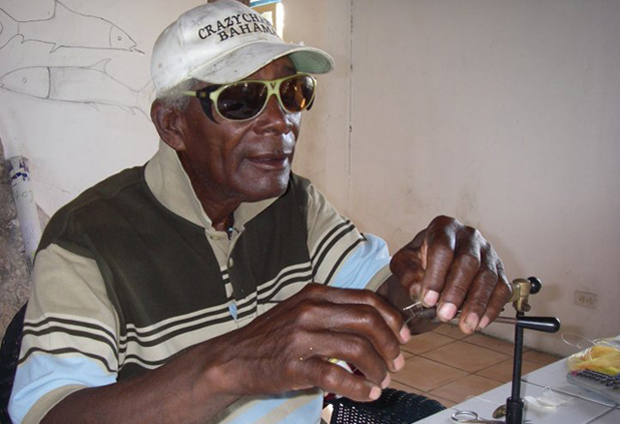 Profile: ‘I invented a ﬁshing fly that made millions of dollars’

Prescott Smith owns and operates Stafford Creel Lodge on Andros Island, Bahamas. It is one of the best run lodges in the Bahamas. Prescott is one of Charlie’s 15 sons.

[dropcap]M[/dropcap]y father was one of the first people to introduce fly-fishing to the Bahamas. He was a fishing guide for men such as Joseph Kennedy, the father of president John F Kennedy, and Ernest Hemingway. I was seven years old when Ernest fished with us. He was a lovely man. As a fisherman, you couldn’t beat him. He didn’t ask the fish to bite, he made ’em bite. I picked up a few tricks from him.

I was born on Grand Cay, Abaco, in 1936. When I was eight, I became a fishing guide myself. My father sent me out on the beach with clients because I knew where all the fish were. Soon he started trusting me with the boat, and as a young boy I was guiding grown men on the saltwater flats of Abaco, fishing for bonefish, barracuda, permit and tarpon.

In 1968, I opened Charlie’s Haven on Andros Island, a fishing lodge I built by hand with a few scraps of wood and steel. The baseball player Ted Williams became a client of mine. So did Jack Nicklaus, the champion golfer. Dag Hammarskjöld, the Swedish UN secretary-general, fished with me for 10 years before he died in that plane crash. At the same time I was working as a chef and resident musician at the Lighthouse Club in nearby Fresh Creek. I cooked, fished and played calypso on the guitar.

I remembered that once when I was growing up, my father took a feather from a wild duck he’d shot and tied it on a hook and gave it to me. I went down to the beach and right away I caught a bonefish with it. In the water the fly looked like a minnow, so I realised that bonefish must like minnows. Using a chicken feather as the body and some beads from a military ID tag as the eyes, I tied a fly that looked exactly like a minnow. The next day, the two prime ministers got their bonefish — and I had invented the famous “Crazy Charlie” bonefish fly, which revolutionised the sport of saltwater fly-fishing. Later, I guided two men from a fly-fishing company in California. They took my fly back to the US and a version was made of it. I originally called it the “Nasty Charlie” but they changed the name. Today there are hundreds of variations of the “Crazy Charlie.” The fly has made millions of dollars for the fishing industry but I’ve never received any compensation.

I’m not bitter about it. I’ve had a blessed life. I’m 78 years old but feel like I’m 28, and I’m the father of 15 sons and nine daughters. That’s what happens when all you do is fish, cook and play music. Now, with my bad eyes, I’m no longer guiding but I’m working on more killer bonefish flies.

My son and I are starting a fly-fishing university to teach young Bahamians. The sport isn’t really a part of our culture. It’s just so expensive — it’s a sport for kings and queens. But the young folks are getting into it. Once our university is up and running, we’ll train them not only how to fly-fish but in other aspects of eco-tourism too, like sea kayaking, bird watching, snorkeling and deep-sea fishing.

Our main thrust will be conservation. We have incredible natural resources in the Bahamas — the third largest reef in the world and 20 miles of ocean flats — but unless we use it in a sustainable way, it’ll be destroyed by the typical tourism model of huge hotels and cruise ships that tear up the mangroves.

We want fly-fishing to take root here, and for Bahamians to be better stewards of the land, so that they really become empowered.