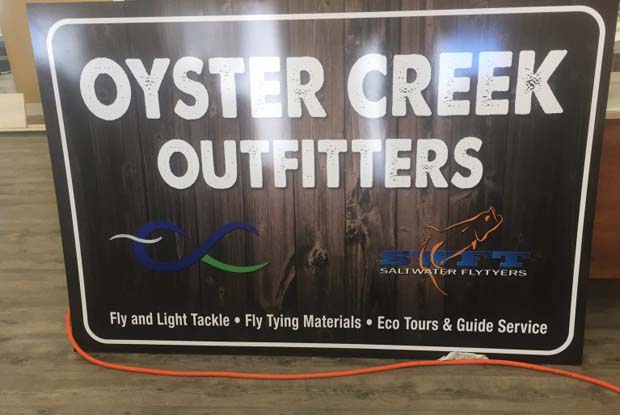 [dropcap]D[/dropcap]on Reed is no stranger to Fly Life Magazine.com, top fly tyers in the world or Fly Tyer Magazine. Don has been quoted in newspaper articles, fly fishing publications, and books on the subjects of thread, wire hooks and feathers

For us, Reed wrote a very, very popular monthly tying column, but his real life time obligations interfered, and at the time of his last column for us he had invested in Saltwater Fly Tyers, a fly shop in Jacksonville, Florida. In typical Reed fashion, he turned small into Northeast Florida’s top fly shop – settling in St. Augustine, Florida, about 25 miles south of the origin shop.

His new fly shop and online store have enjoyed storybook success, and since he is about to enjoy a belated Grand Opening, we asked Mike Hodge, a new hire at Saltwater Flytyers at Oyster Creek Outfitters, St. Augustine, Florida to give us the skinny on this transported North Georgia cracker.

NOTE: Mike is a freelance writer from St. Augustine, Florida. His outdoors work has appeared in Fly Fisherman Magazine, The Drake and Florida Sportsman Magazine … among others. 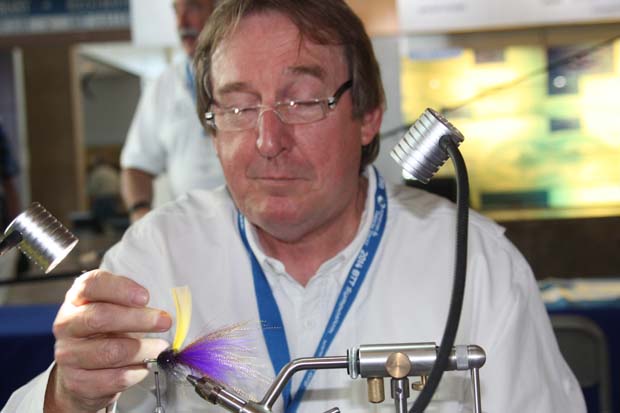 Mike Hodge: Don Reed has been in love with fly fishing since he was a young boy crawling around thickets of mountain laurel while stalking trophy trout in his native North Georgia. That was nearly 50 years ago. He no longer lives in the mountains — he calls St. Augustine, Florida home — but his passion for the long rod has not waned. He doesn’t fish as much as he used to — or would like to — but instead has channeled his enthusiasm to helping others get involved in fly fishing. He owns a fly shop, an almost unthinkable proposition these days, given the boom of big-box stores.

Here’s what Reed had to say about a number of topics affecting fly fishing, everything from business to conservation:

MH: Has the quality of fishing changed since you started fishing decades ago?

MH: I assume for the worst?

DR: Not necessarily. In areas where management’s good, in areas where they have a good DNR, and they are funded appropriately, it’s much better. Much better. But then there’s the conflict between pay-for-play private water and public water. Public water, someone’s always spoiled the deal by sitting under the bridge drinking beer all night with a can of corn and they take all the trout out. Or they take a net and seine the river. There are people that can just spoil the resource. That’s always been true. I think probably we’re probably doing a better job of managing the resource than we’ve ever done, although in the saltwater area we’re doing a much worse job because we’re allowing the government to run roughshod over sport fishermen, especially and allowing the commercial guys to take whatever they want. I’m not real happy with saltwater management, especially when NOAA gets involved in it. 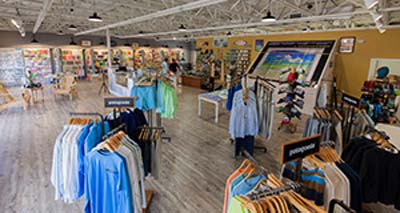 MH: Let’s talk about fly shops. Do fly shops have a responsibility to tutor, to mentor people, particularly as far as stewardship?

DR: We have an obligation to the public, to the sport and to the ethics of the sport, if we’re going to have a sport. For some of us, it’s more of a religion than a sport. If you want to put it into the context of a sport, it is the largest sport in the United States, if not the world. In the state of Florida alone, fishing is responsible for $12- to $13-billion to the state. Fly shops and people who work in recreational fishing not only have a responsibility, but an obligation to educate and to improve the way that the public deals with it.

MH: If you look at the trend statewide and nationally, a lot of fly shops have closed their doors. Why is that?

DR: The world’s changed dramatically since the days of the mom and pops. You could put it in the framework of what Walmart has done to small business in middle America. They’ve destroyed it. Big box operations, people like Bass Pro and Orvis and some of the others, have really dominated the market. A lot of them have put the mom and pops out of business. Today, you have to use the technology that’s available. The customers we have in the 21st century are not like the mid (19)50s, the mid 20th century, nothing like that.

MH: The internet, I assume?

DR: The internet and the way you advertise locally. If you don’t get out and reach beyond the people that walk through your door by osmosis, you’re not going to make it. You’re not. The old-fashioned mom and pops are gone.”

MH: Why do you think you have a good chance of succeeding? 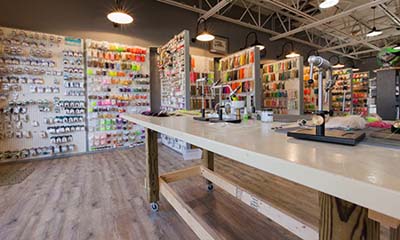 DR: First of all, I’m willing to … A lot of people get in fly shops because they want to dabble. They want to have fun and go fishing. What I’ve found is I fish about the fraction of the time I used to fish before I had a shop. The deal is that we have a very aggressive web management. We’ve been on the internet before we had a brick-and-mortar door. If you don’t look at the industry as a global industry, you’re not going to make it. You can’t live, as much we would like to, live on local sales. You really can’t. There’s no way to do it. You can’t generate enough, unless you’re in a very unique place, like Sandy Moret down in Florida Keys Outfitters. …

NOTE: Featued Image is Saltwater Flytyers at Oyster Creek Outfitters signage “Under Construction” in May of this year. Mike Hodge photo.