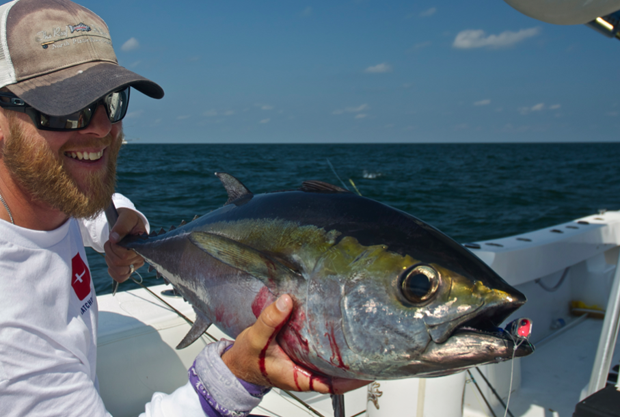 Fish Facts: Thunnus, atlanticus. The blackfin tuna is a warrior

Pound for pound, Thunnus, atlanticus will put up a fight equal to any fish twice its size. Great table fare

[dropcap]T[/dropcap]he blackfin tuna is one of the few tuna with a limited range. It occurs only in the western Atlantic Ocean from Massachusetts south to Rio de Janeiro, including the Gulf of Mexico and Caribbean Sea. It is abundant in tropical regions, however in the northern Gulf of Mexico the yellowfin tuna (Thunnus albacares) is more common than the blackfin tuna. The blackfin tuna is a highly migratory species, moving into more temperate waters during the summer months. Occurring in oceanic waters in close proximity to the coastline, the blackfin tuna prefers clean water and warm temperatures, usually seaward from the continental shelf. It is a strongly schooling, migratory fish, often forming large mixed schools with skipjack tuna (Katsuwonus pelamis). During the summer months, the blackfin tuna migrates to temperate waters remaining above 70°F. It is most abundant off the Florida coast during autumn, winter, and spring. The number of gill rakers, small, flesh-colored knobby structures located on the inside of each gill, can be used to distinguish young blackfin tuna from other tuna species. The blackfin tuna has only about 20-23 on the first arch, fewest of all the Atlantic tuna species. Most other species have approximately 30 or more gill rakers. The ventral surface of the liver, visible as a pink-red organ in the chest region when opening the body cavity, can also be used to positively identify the blackfin tuna. Other tuna species have striations on the ventral surface of the liver while on the blackfin tuna, this surface is smooth. A small swim bladder is present.

The blackfin tuna has a bluish-black back with gray to silver sides and a white belly. A broad, brown stripe is located along the upper portion of the eye. There is a prominent yellow to golden-colored lateral band present on the sides, usually fading upon death. Small iridescent areas located on the sides of the abdomen are silvery. This area is sometimes marked with vertical rows of pale dots along with slightly elongate spots between these rows. The dorsal finlets are dusky with bronzy reflections and white edges while the ventral finlets are usually gray. The absense of yellow on these finlets distiguishes the blackfin tuna from all other tunas. However, the dorsal finlets sometimes fade to yellow upon death.

Blackfin tuna reach a maximum size of 39-inches  in length and 46-pounds in weight. They are most frequently taken at an average size of approximately 19.75-inches, corresponding to a weight of about 7-pounds. Maturity is reached at lengths of 16-20-inches. The blackfin tuna may live past five years of age. Growth rates have been reported at .4- .6-inches per month. The all-tackle world record for the blackfin tuna is 45-pounds 8-ounces caught off the coast of Florida. Blackfin tuna feed on a variety of prey including squid. Photo courtesy NOAA.

Various fish, squid, amphipods, shrimp, crabs, and stomatopods constitute the diet of the blackfin tuna. It often feeds in surface waters where they form large mixed schools with skipjack tuna (Euthynnus pelamis). It directly competes with the skipjack tuna for prey, and is occasionally even preyed upon by it. Blackfin tuna feed by straining prey from the water as well as chasing and capturing prey which is then engulfed.

Spawning occurs in April through November off the Florida coast, and June to September in the Gulf of Mexico, well offshore in the blue oceanic waters of the Florida current as well as in the coastal waters of northern Brazil. The fish release sperm and eggs into the water column where fertizilation occurs. The buoyant eggs produce pelagic larvae, little else is known about the eggs. These larvae are found in the open ocean at depths ranging from the surface down to 164 feet (50m). The vertebral column is developed by a length of 11.0 mm, while all fin rays develop by lengths of approximately 20mm.

At a length of 28mm, the young blackfin tuna has some pigmentation. The first dorsal fin is pigmented, but not entirely black. Dark pigmentation also exists from the top of the head through to the brain region. The body is heavily pigmented dorsally, with a concentration of pigment concentrated along the lateral line as well as areas along the dorsal and lateral areas, resulting in a faint pattern of six vertical bars. Dolphinfish, blue marlin , skipjack tuna  and various sea birds all prey on the blackfin tuna during its life cycle. In fact, it is one of the most common items in the diet of the blue marlin. Cannibalism also occurs in this tuna.

This tuna is important commercially as well as to the recreational fishing industry. There is a major fishery off the coast of Cuba and throughout the Caribbean where it is common. Around south Florida and the Bahamas, the sport fishery is also important due to the proximity to deep water. This tuna is highly regarded for its fighting ability. The flesh is of excellent food quality and is marketed fresh, dried and salted, canned, and frozen. Off Cuba it is caught with poles and live bait, while elsewhere it is caught by trolling and drift fishing.

This species of tuna is currently not listed with the World Conservation Union (IUCN) Redlist and is considered to be in no immediate threat. The IUCN is a global union of states, governmental agencies, and non-governmental organizations in a partnership that assesse the conservation status of species.

You don’t need to cast well and you don’t have to learn to properly swim the fly. You simply let the “drift” take care of business. It’s the captain who does all the work, find the school, control drift and keep the visitors busy with live bait (quality bait very important).

Captains in the Keys (my only experience with blackfin) search for seamounts which create upwelling and current, the West Hump a good example. It creates current up to about 3 1/2 knots. The approach is always on the down-current side. If the blackfin are around, the signs of their picking off baits will be quite evident – birds, boils and below the boat visuals. Blackfin can be presentation (fly, lure, bait) picky, but the are not boat shy.

The current created by an open ocean seamount is, generally, significant (3 plus knots).

A qualified captain will keep plenty of live bait aboard and know just how much pitching is needed to keep the classroom interested.

A fly should match in size what is on that day’s menu. The following are by no means the end-all flies, but they work: Popovics Surf Candy, Clousers, Lefty’s Deceivers, Enrico Puglisi’s pilchard flies, Trey Combs’ Sea Habit and baitfish poppers. Anything with a “tail.”

It is most abundant off the Florida coast during autumn, winter, and spring. Leaders to 7- to 9-feet, blackfin are not leader shy. Class tippet at 20-pounds and shock 30-pound test.

NOTE: Sharks, as well as lots of predators, will always be around an upwelling (seamount) and blackfin will eat and be eaten.