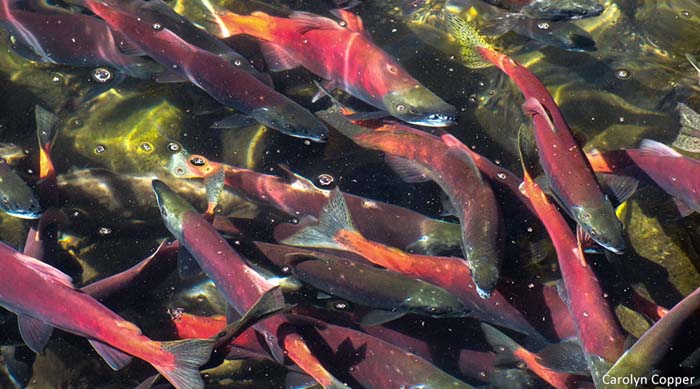 [dropcap]L[/dropcap]ast year, Bristol Bay saw a record-setting sockeye salmon run even while other runs were down.

But unless we act now, that critical sockeye spawning habitat could be devastated by the opening of one of the largest open-pit gold and copper mines in North America: the Pebble Mine.

Bristol Bay supports the most valuable wild salmon fishery in the world, supplying almost half of the world’s sockeye salmon. Last year’s record-setting run supported a vibrant recreational fishery and a $281 million commercial fishery in the bay alone, while allowing over 21 million sockeye salmon to return to their natal streams in the watershed to spawn.

Two years ago, hundreds of thousands of Americans like you urged the Environmental Protection Agency to protect Bristol Bay’s sockeye salmon fishery from the Pebble Mine. Now, the Army Corps of Engineers is pushing the massive mining project forward with a deeply flawed and limited environmental review that ignores the impacts it will have on the spawning habitat which supports the sockeye salmon fishery.

Tell the Corps of Engineers: don’t ruin the best sockeye salmon run in the world.

If the Pebble Mine project moves forward, the massive open-pit mining and development of more than 80 miles of roads and 180 miles of pipelines will transform this critical spawning habitat into an industrial wasteland. At least 3,500 acres of wetlands and more than 80 miles of streams will be destroyed. Toxic chemicals from mining waste will pollute the remaining rivers, streams, and wetlands that salmon, bears, and hundreds of other wildlife species need to thrive. Alaska’s $1.5 billion commercial salmon and recreational sport fishing economies could crash as salmon populations plummet.

The science clearly shows that the Pebble Mine would pose unacceptable risks to the fish and wildlife of Bristol Bay. Join us in opposing the U.S. Army Corps of Engineers’ faulty environmental review by taking action today. Don’t let the largest sockeye salmon run in the world fall to ruin: tell the U.S. Army Corps of Engineers to stop Pebble Mine.