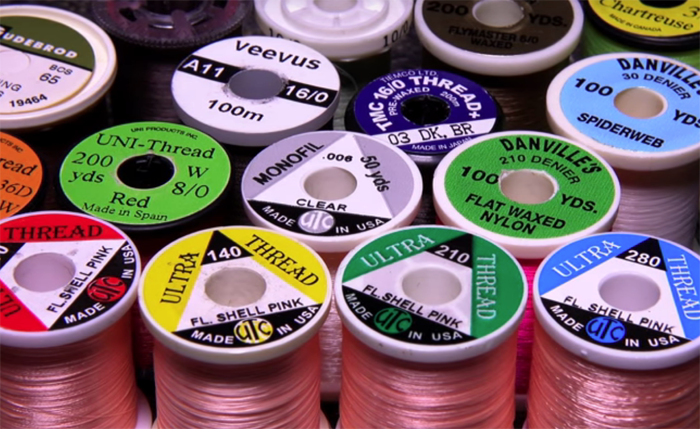 Fly tying began hundreds of year ago. Historians with Blogger Ph.D. degrees, University of Tweeting Foxx, differ on origin, materials, planets, and start dates, whether Republicans or Democrats were responsible – many cases differing by millennia and realities. That aside, it was horse-hair, cotton, and silk to begin with.

By the 1930s it was nylon, invented by the Germans and perfected by Dupont which among other things exploded fly tying, sport and commercial fishing, and by the 1950s Danville had almost 100% of the tying thread market. It was cheap and came in a rainbow of colors – and still is all those things and Danville is still in the game.

Tim Flagler, fly tyer extraordinaire, points out in the video below that the spec terms are confusing

If you can remember the following, you’re good to go:

1. UTC measured thread is commonly bought UTC 70 (15-oz. breaking strength) and UTC 140, the latter twice as thick. Both are flossy and lie flat – 70 for smaller flies and 140 for larger flies and saltwater tying. Remember to spin it occasionally to un-cord it.

2. UNI is by far the most popular – classic tyers seem to prefer it. It’s more like a woven “cord” that does not lie flat or appear flossy – it’s round.

Size or thickness measured in denier with 8/0 and 6/0. As a reference, the latter thinner than 140 denier thread

3. Veevus is a blend of flat and round but does flatten out anchored to the hook. It’s measured 8/0 and 6/0.

5. Kevlar has been remarked on as best left for bulletproof vests.

6. Gel Spun (GSP) first appeared about a dozen or more years ago as GX2, a polyethylene product that is multi-strand and measured 50, 100, and 200 which stands for the number of strands. GPS is stronger than kevlar.

Denier is the weight in grams of 9000 meters of polyester, nylon or rayon threads. There is also now for most threads a correlation between the breaking strain, for example, typically a 70 denier thread will be stronger than a 30 denier thread. However, GSP or Gel Spun Polyethylene is an exception to the rule as GSP can be from three to nine times stronger than nylon or polyester of the same denier. It is also two to three times more expensive. The offset is two wraps of no-stretch GPS thread is all it takes when there is maybe three or more wraps needed with nylon/polyester.

There are many companies producing fly tying threads expressly for the fly tyers. Included, but not necessarily limited to these:

The choice of thread for me has landed on Gel Spun because it’s tough, does not stretch, minimalist inventory (I only buy white and near black), easily colored, and only uses half the material as compared to nylon/polyester. I never have a lot of spools in inventory that will never be used again.