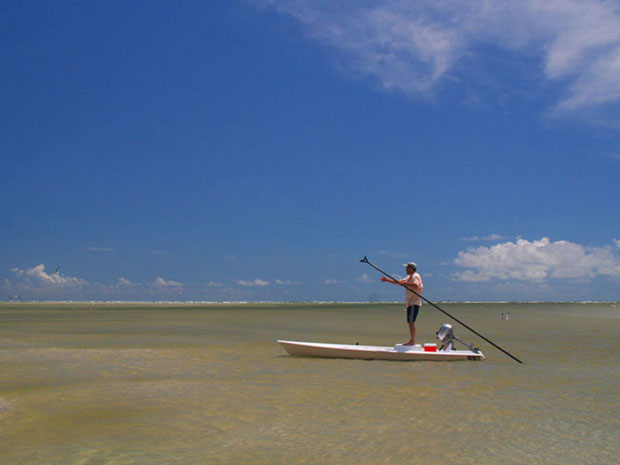 Take me to The Bahamas and I’ll fish all day in places no one has ever seen.

[dropcap]S[/dropcap]OLO SKIFF comes from the innovative mind of Tom Mitzlaff of Mitzlaff Boatworks out of Jacksonville, Florida. Tom is a passionate boat builder and continues to mature SOLO with add-ons and performance enhancements. Mitzlaff is as familiar to shallow water anglers from The Bahamas to Texas as crabs are to permit. Tom, as many flats anglers know, designed and founded the Mitzi Skiff line of inshore power boats. When we asked Tom how many SOLO’s he’s produced, he wouldn’t say, but throughout the interview he did say that build time had been extended and that he has added shop help to handle the workload. Today, he said, “I could build you one in about six weeks if I don’t get swamped before you decide.”

In recent years, new and lighter weight water craft have nudged their way into the world of shallow water angling. It all, of course, started with the canoe back in the day, then came kayaks which keep maturing,  and morphing (Hobie) followed by the Gheenoe. Now even stand-up paddle boards (SUP) are being adapted for fly fishing (Dragonfly’s version is one of the best on the market).  Recently we covered an article on inflatables entry into this marketplace(Airborn).   Now we have the SOLO SKIFF and it’s made to be loved for more than one reason. 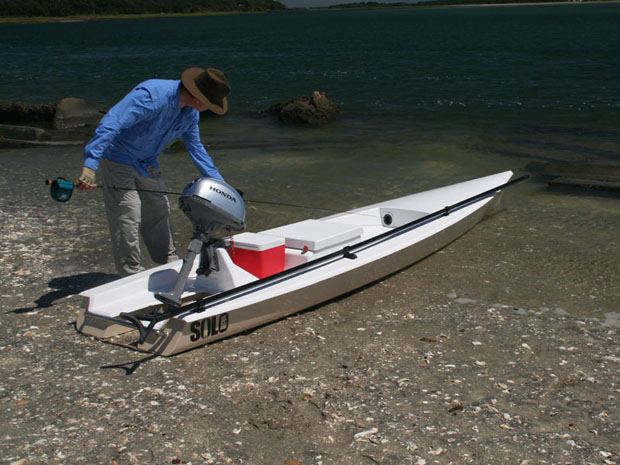 Getting ready at low tide. One push and you’re off in an inch of water.

One look at a SOLO and you can see it’s a useable fishing machine for anyone and that includes septuagenarians. It’s much easier to get in and out of than any canoe or kayak and certainly easier than mounting and fishing from a stand-up paddle board. Anyone who fishes knows that the value of  height is seeing ahead of and around you. So being able to stand on the SOLO “poling platform,” which doubles as a seat and triple plays as storage space, has better than a one-up on any canoe, kayak, inflatable or SUP board for viewable water. Also, water always flushes via the open aft end so water never gets trapped inside the self-bailing SOLO.

It only weighs about 120-pounds and the split tailed transom can manage up to a 5 HP outboard that hits its top speed of around 8- to 10-mph. Otherwise, you can simply opt for a trolling motor (gear and battery for a trolling motor fits inside a storage compartment below the seat). The hatch cover and seat/poling platform unit is heavy duty. The latch and rubber gasket will keep gear dry. A single rod holder in the forward bulkhead accepts a single 9-foot fly rod. 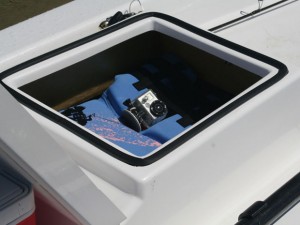 The poling platform, which doubles as a seat when under way  and an XXL under storage box.

You can pole a SOLO quite quickly and do so with a lot of control and with a lot less effort than many of the aforementioned micro skiffs. Also, from the “platform,” stripped line falls to the open cockpit below you so when casting, in general and especially in a brisk wind, it helps keep the fly line where it belongs.

A word of caution

The SOLO is a shallow, calm water hybrid skiff. Although you could safely get through a rough passage in a SOLO, I personally would do my best to avoid getting into a rough water situation. However, if you do get a dunking, the low sides make getting back on-board a snap and the grab bar at the transom is a nice safety feature. However, with a motorized SOLO and fishing alone, I’d be sure to have a kill switch tether. I don’t know anyone who can swim for miles chasing a skiff going at a steady 10 MPH.

These are really cool little boats and something that would be a blast to own for back-country and many other fishing applications. I can already envision myself getting towed around by a nice tarpon in the Everglades this Spring!