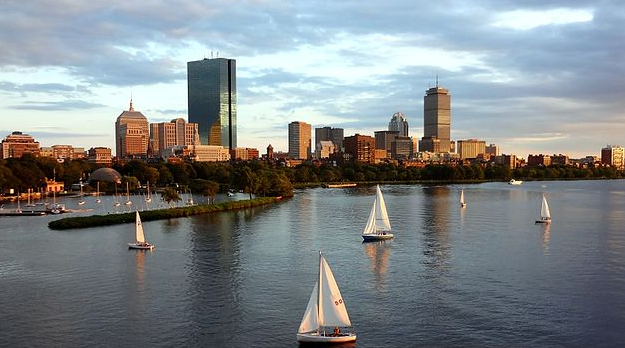 River & Dams: Conjoined for a reason, then forgotten

In almost all major rivers of New England and their tributaries, whole spawning migrations of anadromous and catadromous species like the Atlantic salmon, stripers, trouts, alewife, sea-run-brown trout, shad, eels and other migratory species are unknown to most “Yankees.”

By Jenny Rogers / The Nature Conservancy

[dropcap]S[/dropcap]ally Brown knows how to throw a party. On the second floor of an old mill factory in rural New Hampshire, she gathered several friends to watch a dam—her dam—be removed from the Ashuelot River. “It was very exciting,” she recalls a few years later. “We had sandwiches, iced tea. We had a regular picnic while we watched it. A little removal party for that damn dam.”

The dam, on a tributary of the Connecticut River, had once powered a textile factory known as Homestead Woolen Mills but had become a thorn in her family’s side. Brown inherited the complex from her late husband in 2008. His family had run the mill since 1911, the flow of the river powering the mill until electricity took over. Previously it had powered a 19th-century box-making factory across the river. The dam had stood there, Brown jokes, “since God created Earth.” As long as it stood, fish were able to migrate through this part of the river.

In its heyday, the Brown family’s textile mill employed 500 people. Wool from West Texas, New Zealand, and Australia arrived by the baleful; workers washed, dyed and spun it before sending the bolts of material to a shop on Seventh Avenue in Manhattan. There it was turned into women’s clothing, military uniforms, Catholic schoolchildren’s skirts and blazers, and even army blankets during World War II.

The textile market eventually dried up as overseas manufacturing became cheaper, and the mill closed in 1987. The 140-foot-long dam, made of wood timbers and piles of Granite State rocks, fell into disrepair and became a liability. It would take at least $1 million to fi x it; less to remove it. The Browns turned to state agencies for help, and the long removal process began.

On the day of Sally Brown’s picnic, a rainy day in August 2010, an excavator took a bite from the dam. Water rushed through. And for the fi rst time in more than 200 years, 365 miles of the Ashuelot River and its tributaries ran undisrupted. Brown, her friends and several partners involved in the removal smiled and toasted with their glasses of iced tea. It had taken 12 years for the group, which included The Nature Conservancy, to reach that moment.

The headache might be over for Brown, but the work continues for partners from the state and other organizations that are trying to reopen rivers in New England. This region has some of the most densely dammed rivers in the country, and restoring flows here means repeating the victory at Homestead Woolen Mills many times over. 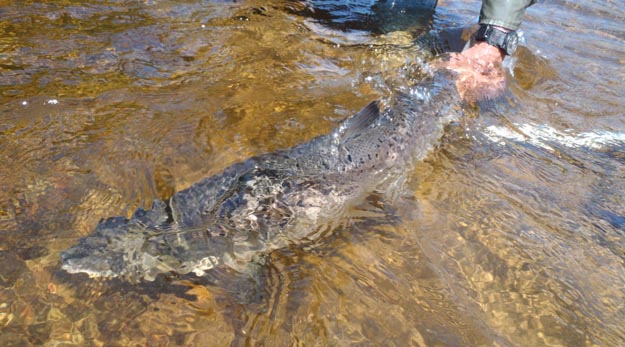 This “was” in New England and could be again. Atlantic Salmon Federation. Release of large Atlantic salmon on Godbout River, QC, 2012 (photo ASF) .

Most are small—less than 12 feet high—and have existed for a century or two. Now relics of the Industrial Revolution, they were once engineering feats, using the force of rivers to spin water wheels and turbines to power sawmills, textile mills and grist mills.

To understand the physical effects of the Industrial Revolution on the landscape of New England, you need only look to the region’s skyline, says Jamie Eves, director of the Windham Textile and History Museum and a mill historian. Old smokestacks rise over towns that had grown up around the mills. The artificial ponds formed by dams attract home buyers looking for property with a water view. Even after mills close, many towns hold on to the dams that powered them. “It’s more than nostalgia,” says Eves. “It’s economic—and identification with a cultural heritage.”

The manufacturing sector left behind an enormous industrial mess. Before the federal Clean Water Act of 1972 mandated changes, fumes coming from polluted waterways in New England peeled the paint off riverside homes. At one mill in Connecticut, Eves says, textile workers dumped the day’s leftover dye into the river. Residents knew what day it was based on the color of the water.

That’s all changed now. The ecological problems in the rivers have less to do with pollution than with connecting disparate habitats. The density of dams in New England means that fish habitat becomes  truncated, spawning migrations are altered, and, in summer, water temperatures rise and oxygen levels drop because of slow river flows. In the past five years, state agencies and nonprofits, including the Conservancy and American Rivers, have increased their efforts to unclog the rivers.

That is Steve Gephard’s specialty. A fisheries biologist with the Connecticut Department of Energy and Environmental Protection, he has spent 35 years restoring native runs of salmon, shad and other fish that migrate upriver from the ocean. “When I first started, there were three fishways in the state of Connecticut and no dam removals,” he says. “Now people who would never have dreamed of removing a dam are [doing so].”

Connecticut’s remaining 4,000-plus dams pose a fairly simple problem from a fish perspective: Most fish species migrating upstream simply can’t jump high enough to cross even a small dam and so can’t reach the habitat on the other side. Less habitat means fewer fish.