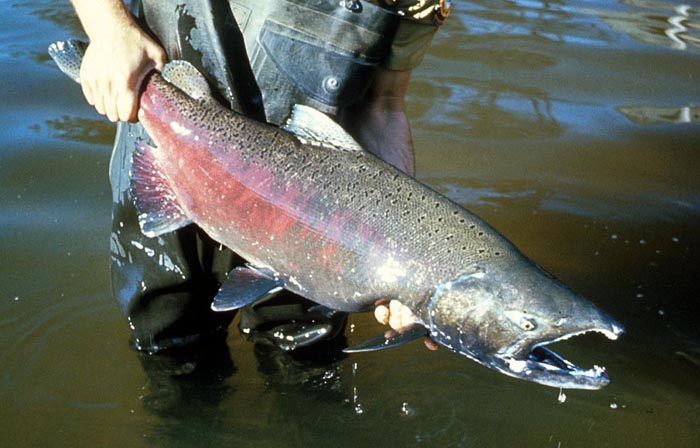 Salmon Are Booming in Oregon’s Rogue River. Dam Removal May Be Why

Eight obsolete dams have been removed or modified on the Rogue River over the past decade. Now its salmon help sustain commercial fishing, despite recent droughts that have devastated fish in other rivers.

[dropcap]A[/dropcap]FTER CHASING SALMON along the southern Oregon coast for 48 years, commercial fisher Duncan MacLean has developed a strong sense of who’s who at the end of his hook. This year, he says, most of the Chinook salmon he’s catching are likely from the Rogue River, where the state of Oregon and conservation groups have worked for years on one of the nation’s largest dam removal programs.

“From everything we normally see, I would think that they are Rogue fish,” MacLean said. “If you were to go back over history and look at the way the fishery resource acts, this is a good time for them to be showing up.”

If he is right, MacLean is seeing the ultimate reward from all that restoration work: Wild salmon surging back in the Rogue.

All the data are not in yet, and may not be for several years. But Daniel Van Dyke, East Rogue District fishery biologist for the Oregon Department of Fish and Wildlife, said early indications confirm MacLean’s assessment.

The results may hold important lessons for other Western rivers. That’s particularly true on the Klamath River in California, a hydrologically similar watershed where three dams are targeted for removal.

“I wouldn’t be surprised if commercial fishermen are catching a lot of Rogue Chinook right now,” Van Dyke said. “There are individual signs that are really looking encouraging, and I suspect are tied to the dam removal project.”

Dams started coming down on the Rogue in 2008, and the work continues to this day. In 10 years, eight dams have been removed or modified for fish passage on the Rogue and its tributaries at a cost of about $20 million, said Jim McCarthy, Southern Oregon program manager at WaterWatch of Oregon, an environmental group that has played a large role in the process. The work has restored 157 miles of free-flowing river. Wimer Dam on Evans Creek, a tributary of the Rogue River in Oregon, during demolition in 2015. It is one of eight dams to be removed or modified in the Rogue watershed since 2008. Photo Courtesy Scott Wright, River Design Group.

Most of the dams were relatively small barriers built for water diversions and had fallen into disrepair. The most recent, Beeson-Robison Dam, came down in 2017 on Wagner Creek.

Although the dam removals began 10 years ago, the full benefit to salmon populations has only been measurable over the last two years. That’s because salmon have such long life cycles – usually three or four years spent in the ocean before returning to spawn in freshwater. This means the adult salmon being caught in the ocean now are the young of the first adults to spawn successfully in the free-flowing Rogue.