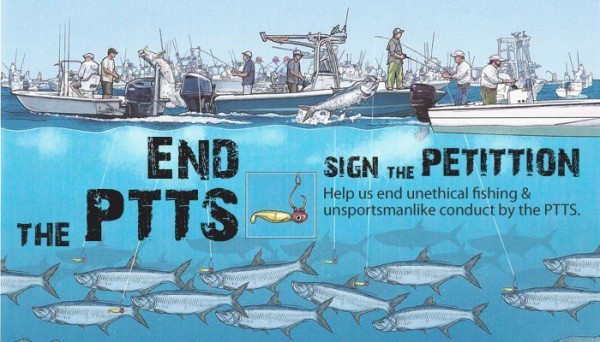 Save the Tarpon Petition: It’s not just a “local” thing – End the PTTS

This post was written by  savethetarpon.com contributor, Panhandle Fly Guide. The site has a wealth of information on this most contentious subject.

[dropcap]D[/dropcap]on’t you just love how if you oppose the Professional Tarpon Tournament Series (PTTS) or support Save The Tarpon you automatically get character-assassinated by Mr. Collecchio, Mr. Mercurio or some other PTTS crony?  Okay, I’ll bite—I’m guilty on both accounts so fire away. 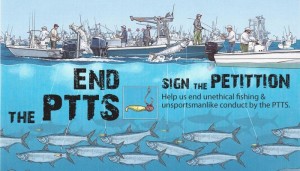 Here, I’ll help you out: I think the PTTS is the ultimate example of fishing gone wrong and perpetually abuses the fishery, scoffs at conservation and stewardship and mishandles one of the noblest game fish on earth just for corporate profit.

I must therefore be one of those “left-wing environmental extremists” Mr. Mercurio loves to talk about on his Facebook page:

Except that I’m not, I’m a sportsman.  I just don’t support all fishing practices.  You call me elitist because I don’t consider snagging fish to be sporting?  Do you consider dynamite fishing sporting?  If the goal of tournaments is just to “catch” the biggest fish with method being no object why don’t you just net them or better yet electroshock them then race to see who can get the biggest one that floats to the surface?  Sound absurd?—you extremist, you!  If you really don’t believe that pass-jigging snags fish then how about instituting a rule that each “catch” be evaluated by the FDW for hook placement?  To make it even more fun you could have the rule stipulate that any fish hooked outside the mouth automatically disqualifies the team (no biggie, remember that you don’t believe that jigging snags fish).