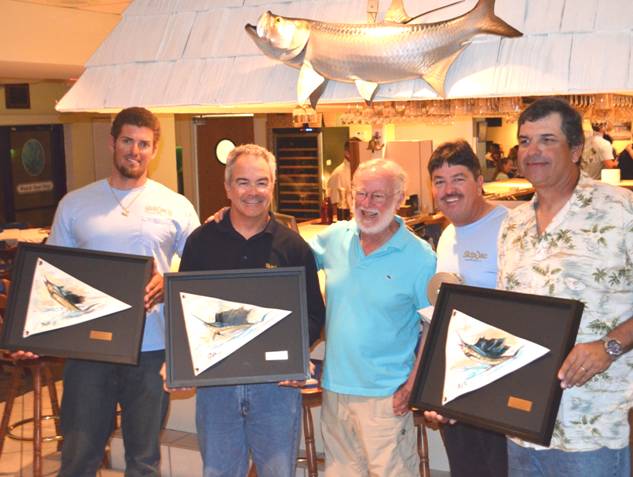 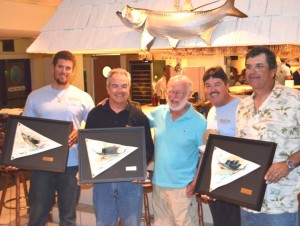 [dropcap]A[/dropcap] full complement of devoted and talented flyrod anglers gathered for two days of sailfishing in the 13th Annual Islamorada SailFly Championship. The invitational tournament is an all release team event using 16 pound class (8 kg) tippet supplied by the tournament. Teams can have two designated anglers who may cast; hook and fight the fish. Anyone on board can tease the fish using live or dead hookless teasers to make the “bait and switch.” A 50 point release is accomplished when the connection of fly line to leader is brought into the tip top of the fly rod. Leaders must be less than 12 feet in length. If the fish is later billed and the fly retrieved the catch then counts for 150 points.

On Wednesday ballyhoo were plentiful on the reef and with fresh 20 to 25 mile an hour winds the sailfish were much more active than on days before. Hooking sails on fly with live teasers requires the team to coordinate lots of moving parts to merge during a tiny window of opportunity for the bite. Heavy seas and high winds made the game extremely difficult. “Challenger II”s Brian Devries with Capt Rob Dixon hooked up and lost a fish at 9:50am as did “Jackpot” at 1:42. Bernard Paul-Hus on Captain Randy Towe’s “Skipjack” hooked up at 2:11 pm and had the connection for 50 points in 3 minutes then subsequently removed the fly at 2:40 for 150 points and the lead at the end of day one.

Light current made catching teasers difficult on Thursday thereby eroding an hour or more of precious fishing time for many teams. Past Champion team “Gotcha” with Capt Mel Walker and backcountry skiff guide brothers Tim and Robert Klein hooked and lost one at 10:09. Less than a minute later Tim hooked up solid and billed the fish at 10:52 moving to second place on time. 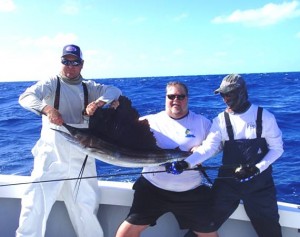 At 11:12 Mike Rempe of Windsor, CO aboard “Skipjack II” hooked his second fish of the tournament and prevailed catching his first ever Atlantic Sailfish on fly. During the fight, team “Tsunami” with Bob Rich, Sandy Moret & Capt Rusty Albury hooked a sailfish but not released soon enough to place.

With four teams releasing one fish each the Grand Championship went to “Skipjack” having the last fish caught first, followed by “Gotcha” and Jackpot. “Best Other Catch” went to Capt Kenny Spaulding’s “Carib Sea” with Bob Lodge and Al McLeod for a 30 inch dolphin. Quite a few more dolphins were caught during the event.

“Most teams raised five to eight sailfish a day and about half teased well enough to make a possible connection. This great group of anglers and captains realize what a high difficulty factor is involved. They also know every team was in the game with a chance right up until the clock ran out,” said Tournament Director Sandy Moret.