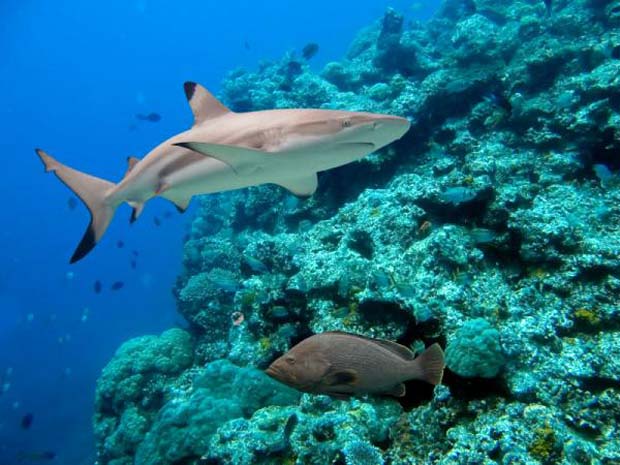 [dropcap]T[/dropcap]o prevent coral reefs around the world from dying off, deep cuts in carbon dioxide emissions are required, says a new study from Carnegie’s Katharine Ricke and Ken Caldeira. They find that all existing coral reefs will be engulfed in inhospitable ocean chemistry conditions by the end of the century if civilization continues along its current emissions trajectory.

Coral reefs are havens for marine biodiversity and underpin the economies of many coastal communities. But they are very sensitive to changes in ocean chemistry resulting from greenhouse gas emissions, as well as to coastal pollution, warming waters, overdevelopment, and overfishing.

Ricke and Caldeira, along with colleagues from Institut Pierre Simon Laplace and Stanford University, focused on the acidification of open ocean water surrounding coral reefs and how it affects a reef’s ability to survive.

Coral reefs use a mineral called aragonite to make their skeletons. It is a naturally occurring form of calcium carbonate, CaCO3. When carbon dioxide, CO2, from the atmosphere is absorbed by the ocean, it forms carbonic acid (the same thing that makes soda fizz), making the ocean more acidic and decreasing the ocean’s pH. This increase in acidity makes it more difficult for many marine organisms to grow their shells and skeletons, and threatens coral reefs the world over.

Using results from simulations conducted using an ensemble of sophisticated models, Ricke, Caldeira, and their co-authors calculated ocean chemical conditions that would occur under different future scenarios and determined whether these chemical conditions could sustain coral reef growth.

Ricke said: “Our results show that if we continue on our current emissions path, by the end of the century there will be no water left in the ocean with the chemical properties that have supported coral reef growth in the past. We can’t say with 100% certainty that all shallow-water coral reefs will die, but it is a pretty good bet.”

Deep cuts in emissions are necessary in order to save even a fraction of existing reefs, according to the team’s results. Chemical conditions that can support coral reef growth can be sustained only with very aggressive cuts in carbon dioxide emissions.

“To save coral reefs, we need to transform our energy system into one that does not use the atmosphere and oceans as waste dumps for carbon dioxide pollution. The decisions we make in the next years and decades are likely to determine whether or not coral reefs survive the rest of this century,” Caldeira said.