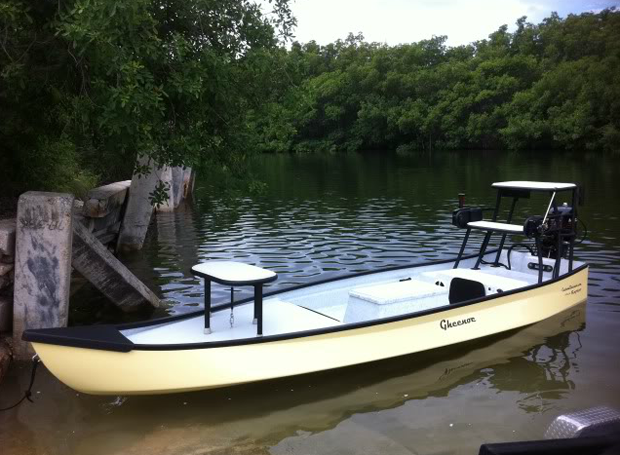 [dropcap]M[/dropcap]y friend and oft-times fishing buddy Mike said: “If you’re like me, and like many others, plunking down $65,000 for a “technical” skiff isn’t going to happen, but I’m OK with under $10,000. That’s right about where the Gheenoe LT 25 came into my rear view mirror. I need to get off the dime I’ve been sitting on for the past 10 boat-less years, I decided, after due diligence, on the LT 25 with modest add on options to the base price. I want a new skiff, not a used one with warts and an out-of-warranty motor. I’m not a tool handy guy. That said, you sure can get a great used flats boat if you look hard and often at the usual online used boat stores. “ The Gheenoe was the late 1960s brainchild of Harley Gheen, Sr. who had a day job as a senior designer at Bendix Launch Support Systems at the Kennedy Space Center. Harley tinkered with scaled down designs of a hybrid skiff that he float tested in the family bathtub for four years before settling on a single design. After perfecting the design Gheenoe was birthed: a hybrid that had the efficiency of a canoe and the stability of a wider beamed flats-like boat. Today, over 45,000 Gheenoe’s ply the lakes, rivers, streams, canals, lagoons and protected backcountry waters of the world.

Based on his father’s original Gheenoe design of the late 1960s; son Harley “Pugar” Gheen Jr. went on a different path in 2003 and started Unlimited Glassworks; building  the LT 15, LT 25 and NMZ 15’ 4”. In so doing, Pugar created some of the best “micro” skiffs on the market today with sales keeping builds out to 6- to 8-weeks and with a mounting cadre of followers as devoted to their boats as the Gheen family has been about the quality of their products.

After Mike picked up his LT 25 with a Tohatsu 15-hp four stroke, we headed out to fish the Everglades – entering the canal system that straddles Broward County and Palm Beach County – called Holey Land (Florida). Weighing in at just over 375, it was an easy task to back it down a steep, gravely grade and slide her into the canal.

Handling requires a little getting used to if you’re flats boat oriented. On very sharp turns it wants to heal over on its side, but not an issue once you’ve learned the feel. Although the LT 25 is very stable, it would be prudent to walk the keel when moving about – it’s not a 72-inch beamed skiff. Although Mike has Stiffy mounted, we’re both passed our poling days so we couldn’t state how that goes.

In a conversation with a guide friend Paul from Placida, Florida, who has a really tricked out LT 25, had this to say about poling: “The LT 25 is easy to move but not easy to keep on a track – doesn’t turn on its axis. It tends to slide and in a good winter breeze it’s even tougher to pole. Don’t get me wrong, it’s not a deterrent to using it, it just requires more effort to pole properly – no skiff is perfect.”

About the building of a Gheenoe

According to Micorskiff’s blog regarding the Gheenoe build method: “The construction follows a tried and true method for cost efficient boats. Due to its shape the mold is two parts. The two mold halves are bolted together and then the construction process starts with a line of tape down the keel. This is simply prep for the next step. Gel Coat is applied then chopper glass is blown into the mold. Finally the false floor, decks, hatches and storage boxes are glassed into the finished boat. While the process may not be the latest and most hi-tech process it has a proven track record. Today combined with father Harley’s original Gheenoe brand there are approximately 45,000 boats emblazoned with the “Gheenoe” moniker according to Pugar.

Mike is satisfied with his choice and says he’d readily recommend the LT 25 to anyone who wants to fish shallow, protected waters.