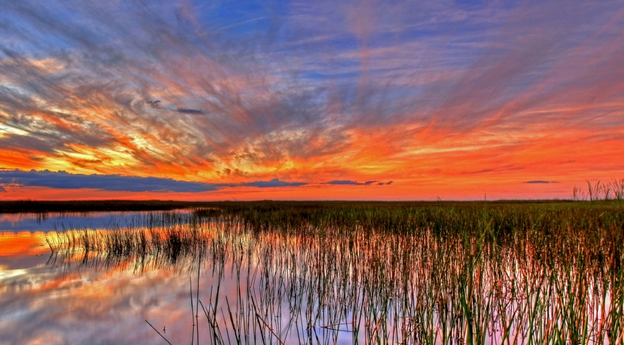 By The Everglades Foundation

(collectively, authors have more than 75 years of research experience in & around Florida Bay)

[dropcap]I[/dropcap]n the past, salinity throughout Florida Bay was much lower, before freshwater flow from Lake Okeechobee was disconnected from the Everglades during the first half of the 20th Century. This is widely accepted and supported by our understanding of the hydrology of the historic Everglades (Light and Dineen 1994; McIvor et al. 1994). The changes that ensued are also evident in the paleo-record of organisms preserved in bay sediments over the past century and fluorescent banding of coral heads, suggesting that freshwater flows were reduced by about 59% and present-day salinities are between 5 and 20 parts per thousand (ppt) higher than historical conditions (Smith et al. 1989; Brewster-Wingard and Ishman 1999; Marshall et al. 2009). We also know that reduced freshwater flows from the Everglades and the subsequent rise in salinity led to a change in the bay’s seagrass communities with Thalassia testudinum becoming more dominant (Zieman 1982). Reduced freshwater delivery to Everglades National Park has been a documented concern since before its establishment in 1947 (Craighead 1966). Because the large watershed that fed the park has largely been cut-off, flows in Shark River Slough have dramatically declined. Current average annual flows are about one third of the historical flows (CISRERP 2016, page 110), which is consistent with paleo-based estimates (Brewster-Wingard and Ishman 1999; Marshall et al. 2014). In Florida Bay, at the southern terminus of the park, droughts are known to exacerbate the problem through enhanced evaporation and chronic hypersalinity (Fourqurean and Robblee 1999). Some of Florida Bay’s highest salinity values were recorded during the drought of the late 1980’s and coincided with a major seagrass die-off that began in 1987. It is worth noting that the 2015 seagrass die-off in Florida Bay, which was also associated with a drought-induced lack of freshwater flow through Everglades National Park, was just as severe as the 1987 event, if not more so in terms of the magnitude of hypersalinity.

The scientific consensus that emerged following the 1987 die-off was that the abnormally high salinity was the catalyst that initiated a complex series of processes resulting in the loss of tens of thousands of acres of seagrasses in Everglades National Park (McIvor et al. 1994, Zieman et al. 1994, Fourqurean et al. 1999, Zieman et al. 1999, Koch and Erskine 2001, Borum et al. 2005, Koch et al. 2007a, Koch et al. 2007b). This understanding and the growing recognition of other hydrological and ecological problems across the greater Everglades (summarized in Sklar et al. 2005) were the impetus for the Comprehensive Everglades Restoration Plan (CERP), which, when implemented, will improve freshwater flow and drought-resistance across the Everglades including ecologically and economically important estuaries like Florida Bay.