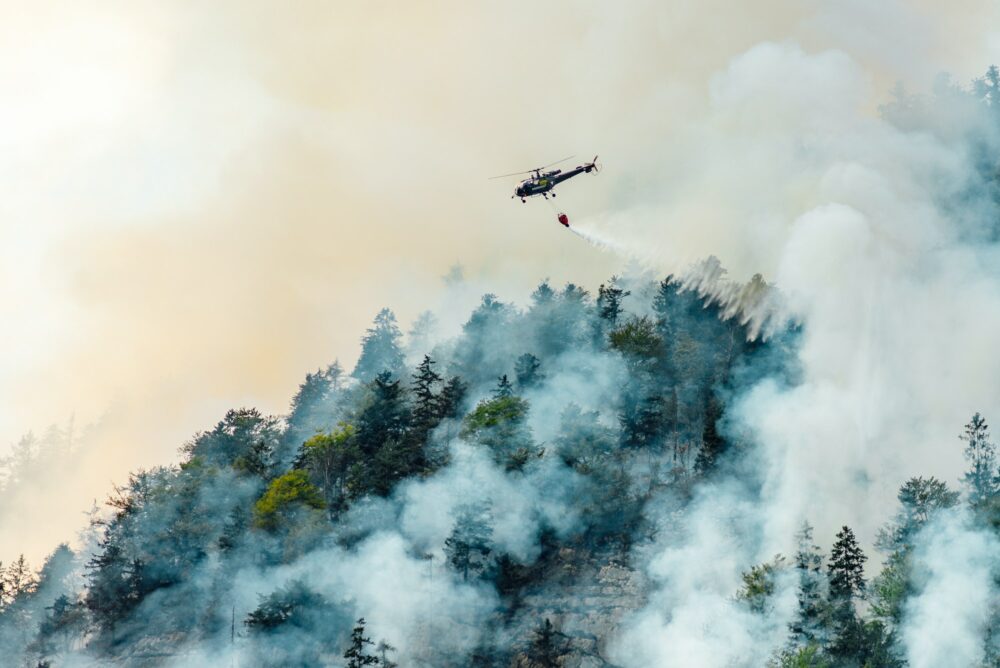 “Shit Just Got Real”: Montana waters too low & too hot for trouts 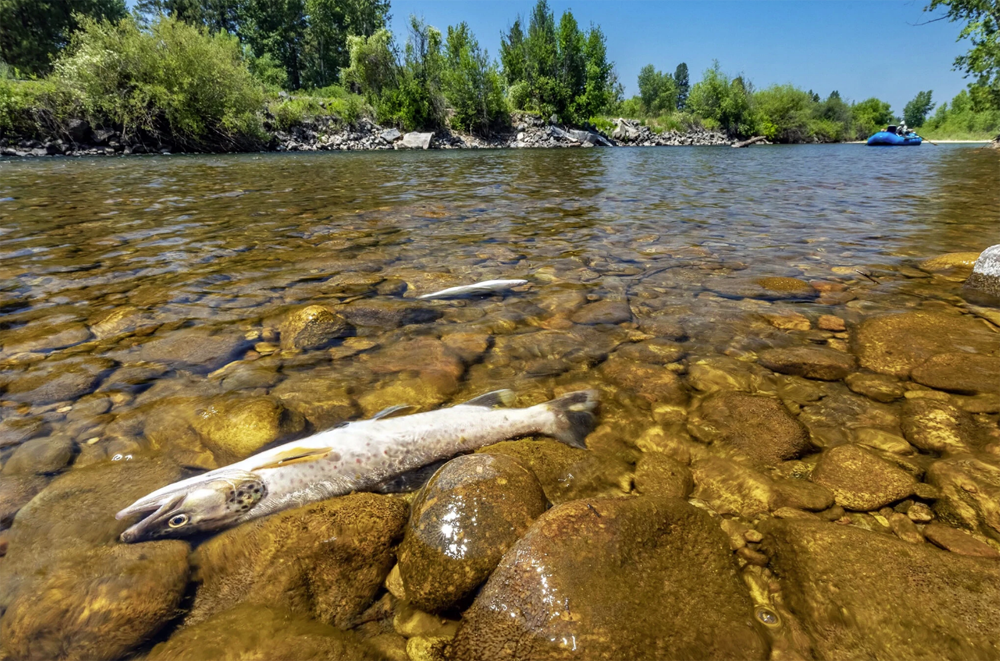 Dead trout in the Bitterroot River in Montana. Credit…Wade Fellin

The state is imposing more restrictions on fishing this year as the combination of extreme conditions, including low river levels, fish die-offs and the crush of anglers, poses long-term problems. 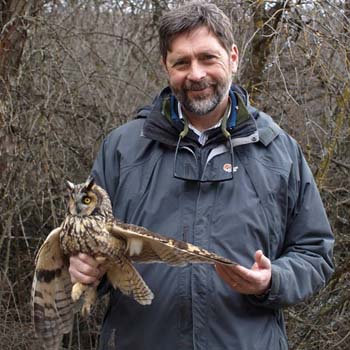 Jim Robbins has written for The New York Times for more than thirty-five years. He has also written for numerous magazines, including Audubon, Condé Nast Traveler, Smithsonian, Scientific American, Vanity Fair, The Sunday Times, and Conservation.

HELENA, Mont. — Few places in the world rival Montana’s fly fishing, and the state’s cold, clear mountain streams are renowned for their large populations of trout, especially the rainbow and brown.

But this is a drought year, and a confluence of extreme conditions now threatens the state’s legendary waters. Higher temperatures early in the year, worryingly low river levels, fish die-offs and pressure from the crush of anglers yearning to recapture a year lost to the pandemic have swirled into a growing crisis.

This week the state announced a slate of new restrictions, including outright closures, for some of the top trout streams.

And a new coalition of businesses, fly fishing guides and environmentalists warned that the severe drought may not be a temporary problem and that the state’s fisheries could be nearing collapse.

The coalition, which includes Orvis, the fly fishing company, and the clothing manufacturer Patagonia, sent Gov. Greg Gianforte a letter Wednesday seeking the creation of a task force to address the decline of the fisheries.

“Between early season fish kills, unnaturally warm water temperatures and low trout numbers, it’s an all hands on deck moment,” said John Arnold, owner of Headhunters Fly Shop in Craig, along the Missouri River, one of the state’s premier fisheries.

The coalition said that the conditions not only threatened the fisheries, but also would be devastating for businesses. “If water quality in our rivers continues to decline, and our rivers themselves dry up, these negative changes will also tank our state’s robust outdoor economy that directly depends on upon vibrant cold water fisheries,” the group stated in its letter.

“This is a really unique, ecologically speaking, part of the world,” said Guy Alsentzer, the executive director of Upper Missouri Waterkeeper. “These rivers are really hurting and they need cold, clean water.” 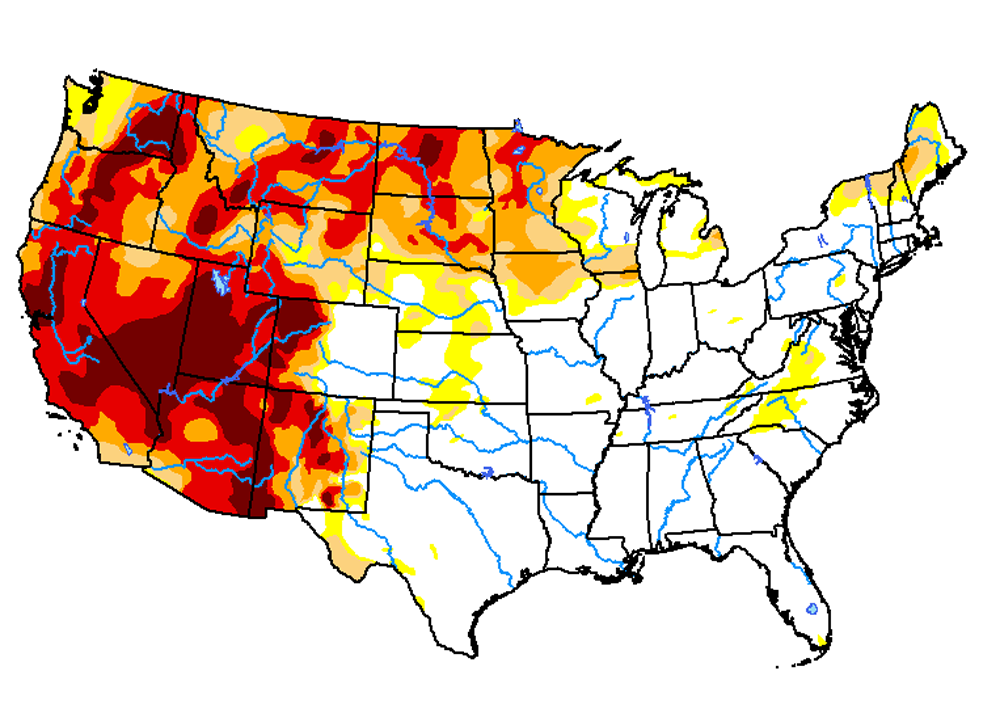 July 20, 2021. The U.S. Drought Monitor is produced through a partnership between the National Drought Mitigation Center at the University of Nebraska-Lincoln, the United States Department of Agriculture, and the National Oceanic and Atmospheric Administration.

The crisis is occurring as the state was just beginning to recover from the pandemic, with tourists and fishing enthusiasts returning in large numbers. Anglers of all kinds spend nearly $500 million a year in Montana, according to the American Sportfishing Association.

In addition to low river levels and even dry sections of some small streams, dead trout have been found floating in rivers around the state, a sight that in other seasons was rare. And there has been a mysterious, steep decline in one of the most sought-after fish, brown trout, over the last several years in southwest Montana.

Trout thrive in water between 45 and 60 degrees. Temperatures in some rivers have hit the low-70s much earlier than usual. At those temperatures the fish are lethargic because there is less oxygen in the water and they quit feeding; the stress of being caught by fishers in that weakened state can kill them. Around 75 degrees can be lethal to trout.

The NYTimes will allow you to read several articles per month free, but you have to sign-in to read. This story is worth your time. . .

Fires have been so intense and cover such vast swaths of land they create internal weather systems.