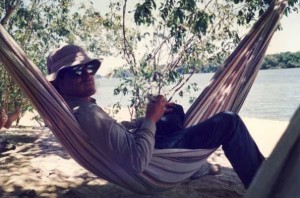 Marshall fishing the Amazon a few years ago.

NOTE: By Skiff Republic founder and publisher Marshall Cutchin. He has been fishing from small boats for his entire life.  He started rowing wooden jon boats at age six and now pushes high-performance fishing skiffs around.

Here’s Marshall’s interview with Capt. Harry Spear, a legendary guide from a family of Keys guides. Spear now makes home in Panacea, Florida, having departed from Duck Key. Florida a few years ago. He now devotes all his energy to long learned lessons about “skiffs” and what makes them good, bad or unremarkable. He spent most of every day from 1960 to just a few years ago – two in fact, in a skiff thinking and tinkering with skiffs while guiding. Here’s what he had to say.

Skiff Republic:   We’re talking with Harry Spear, who was a phenomenal Florida Keys guide in the 60s, 70s, and 80s and started his own custom boat building business in Panacea, Florida a couple of years ago.  Welcome, Harry.  Thanks for talking with us.

SR:  Last we spoke, we were both guides in the Keys.  You were winning tournaments left and right, taking your business very seriously down there.  A lot has changed since then, and I found out last year that you were building custom skiffs.  I wanted to ask you, what is it that got you into boat building?

Spear:   I guess  there are a lot of reasons that I got into it.  One, early on I wanted to do something I had never done before, so I took an old boat, tore it apart down to the skin, and rebuilt it back up.  Steve Huff was building one at the same.  I looked at mine and I looked at his.  I wanted to throw mine away and build one like his.

SR:   That was back when you were stuck fishing out of boats that you didn’t like, right?

Spear:  No, actually it was before that.  That was in the 70s and I just wanted to build a small boat.  I just wanted to know what it was like to make something and use it.  I did not know the difference between a good boat and a bad boat back then.  All the boats were less than adequate, as far as what we would like a modern-day skiff to be.  You know, the learning curve was very steep and it was kind of a profound experience getting into building skiffs.

Anyway, I went through that journey and then I went through helping different boat companies kind of design a boat that would work better.  All of that left me feeling frustrated.  I finally built my first one-off skiff.  I am not  sure of the year, but I’m sure it was still in the eighties.  I really enjoyed doing that. It was very hard.  I did it much differently than I would today.  I got one built and I lived out of that for a few years.  I built another that I thought would be better.  It was different and it was better in some ways and worse in others ways.

The learning curve has always been a steep one.  I think skiff building is at best in its teenage years.

SR:   You think there is much more to learn that hasn’t been learned about hull performance?  Or are there other things that […read more]