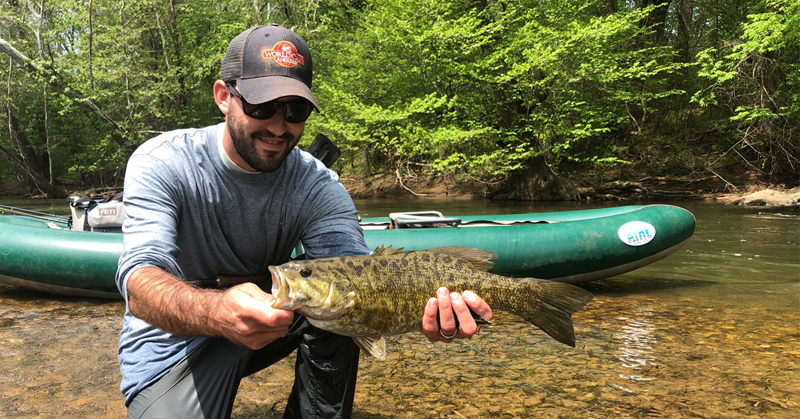 Smallmouth in the Spring

Take it to the bank, spring smallmouth are anxious to meet you says Virginia’s Aquatic Education Coordinator Alex McCrickard. He highlights a spring patterns he’s found biteable for targeting trophy smallmouth and gives us a best bet scenario no matter where you find them this spring.

The mating smallmouth pair (male and female) swim above the nest, rubbing against each other and then rest on the bottom of the nest. While resting on the bottom, spawning occurs and lasts for five seconds. The spawning pair will then encircle the nest from between 25 to 45 seconds before preparing to spawn again. This paired spawning ritual can continue for up to two hours.

After completing this ritual the female will leave the nest and might spawn with another male smallmouth bass. Only a fraction of adult males build nests and only a fraction of adult females spawn. The remaining male will stay and guard the nest until the eggs hatch which is usually within four to seven days and will remain on the nest until the young fry are ready to leave the nest.

Smallmouth bass have been introduced into many countries for recreational fishing purposes. Several countries have reported negative impacts from the introductions of smallmouth bass. They’re causing havoc in Canada with Atlantic salmon.

It normally takes three to five years of growth before smallmouth bass are legally harvestable in states that have a minimum recreational size limit of 12-inches. The oldest reported age for smallmouth bass is 26 years. The heaviest reported weight for a smallmouth bass is 5.4 kg (11 lbs., 15 oz.). Probably a state record. The International Game Fish Association record on a fly is 6-pounds – Lake Erie, Pennsylvania [July 2000].

The range of smallmouth bass in North America includes the St. Lawrence Seaway to the Great Lakes systems and Hudson Bay. Their range extends from southern Quebec in Canada to North Dakota and south to northern Alabama and eastern Oklahoma within the U.S. They are also present in the drainages of the Mississippi river basins. Smallmouth bass have also been introduced into England, Europe, Japan, Russia and into Africa.

Adult smallmouth bass live in shallow rocky areas of lakes and in the clear and gravel bottom runs and flowing pools of rivers. They also live in cool flowing streams and reservoirs fed by these types of streams.

The smallmouth bass is native to the upper and middle Mississippi River basin, the Saint Lawrence River–Great Lakes system, and up into the Hudson Bay basin. The smallmouth bass is a species of freshwater fish in the sunfish family (Centrarchidae) of the order Perciformes. One of the black basses, it is a popular game fish sought by anglers throughout the temperate zones of North America, and has been spread by stocking—as well as illegal introductions—to many cool-water tributaries and lakes in Canada and more so introduced in the United States.

Home Blog Find Smallmouth as the Weather Warms in the Spring 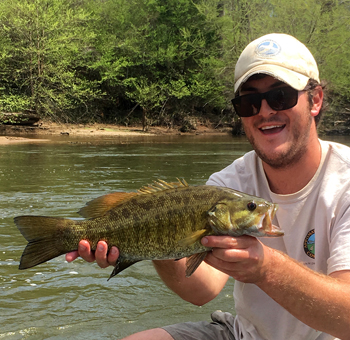 On average years during late winter, water temperatures climb out of the 30s and into the 40s on rivers and streams across the state. As winter transitions to spring, water temperatures will continue to increase into the upper 40s and 50s. Smallmouth bass will react favorably to the warming trends and these fish will move out of the winter holes and into transitionary water in mid to late March. By late March, smallmouth can consistently be found holding in the middle of the water column behind mid-river boulders and along the edges of current seams where fast water meets slow water. These fish can also be found holding along ledges, drops offs, in riffles, and even along the banks.

Mid to late March signals the beginning of pre-spawn activity for smallmouth bass. Spawning typically begins in late April and continues all through the month of May on our Virginia rivers and streams. During pre-spawn, smallmouth can be very aggressive as they get territorial and put on weight for the spawning season. These fish actively ambush smaller forage fish and crayfish during this time of the year. Late March and April can provide for exciting fishing during the pre-spawn feeding frenzy.

Smallmouth bass are benthic spawners; males build nests in clean substrate including gravel, pebble, and cobble bottom. Males are cued to start this process when water temperatures climb into the 60s. These fish often seek out softer currents in 2 to 6 feet of water behind boulders, logs, or other obstructions when choosing spawning sites. Male smallmouth will dig a depression into the river bottom before spawning with a female.

After the spawn, males will stick around and guard their nests from aquatic and terrestrial predators. Spawning success is highly dependent on spring flows. High, muddy water from heavy spring rain events can impact smallmouth bass recruitment and spawning success. Because smallmouth are benthic spawners, high water in the spring time can wash beds out or cover them up with sediment, impacting recruitment and leading to variations in abundance of certain age classes within the population.

Spring can often coincide with high flows on rivers and streams across Virginia. Late winter snow melt and early spring rains can sometimes put rivers at flood level stages. Make sure to exercise caution during this time of the year and check the flows before you head to the river. In these high flows, smallmouth will orient to cover where they don’t have to fight super strong currents to find food. Even in high, muddy water, smallmouth are looking for meals and can be caught with a little persistence and determination as long as the river isn’t in flood stage. 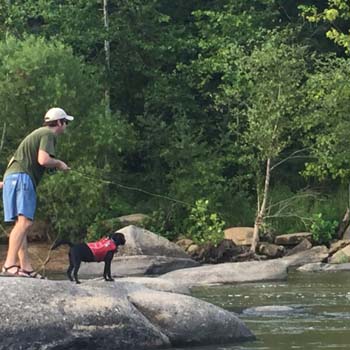 The author pauses during a float trip to fish from a mid-river boulder on the James River. Waffles, his trusty fishing dog, loves catching Virginia smallmouth. Photo by Walker Dales.

It can be best to cover water when fishing for pre-spawn smallmouth bass. Floating the larger rivers during this time of the year is a great way to accomplish this, just remember to wear your personal flotation device. If you are wade-fishing smaller to medium-size rivers, don’t be afraid to do some hiking to cover ground on foot.

The pre-spawn bite is best approached by fishing subsurface minnow imitations in late March through April. Make sure to have some crankbaits on hand in a variety of colors during this time of the year. Rattling lipless crankbaits or noisy lipped crankbaits can be productive when the water is high and stained. The Rat-L-Trap causes commotion that attracts spring bass in these conditions. Soft plastic swimbaits like the Keitech Swing Impact Swimbait or Sassy Shads work well and sink deep quickly when fished on a jig head. Flashy spinnerbaits also entice strikes from spring smallmouth in stained water conditions.

When fly fishing our larger rivers, consider stripping streamers on a 250-grain full sinking line when the water is high and off color. The full sinking line gets your streamer down quickly when in heavy current. In average flows, you will be able to get away with a sink tip on our larger rivers and simply a floating line on our smaller to medium-sized rivers. The Half & Half is my favorite pattern to fish this time of the year. Chartreuse and white, tan and white, or olive and white are good color combinations. This bulky pattern pushes a lot of water and draws in strikes from big pre-spawn bass.

Clouser minnows and Chuck Kraft’s Kreelex are good “go-to patterns” during this time of the year. The flashy profile of the Kreelex does a great job of attracting smallmouth in high, stained flows. Doug Lane, local guide and owner of Angler’s Lane fly shop in Lynchburg, mentioned that “one can expect to catch some of the most aggressive fighting smallmouth during the pre-spawn weeks of March and early April.  Chuck Kraft once told me the key is to work one’s fly more slowly than one is accustomed to in the summer. This nugget from a wise fishing guide, the first full-time river smallmouth guide in Virginia, makes tremendous sense when you consider that the water is somewhat cooler, and the fish are often removing your presentation away from the area they are looking to spawn in.” 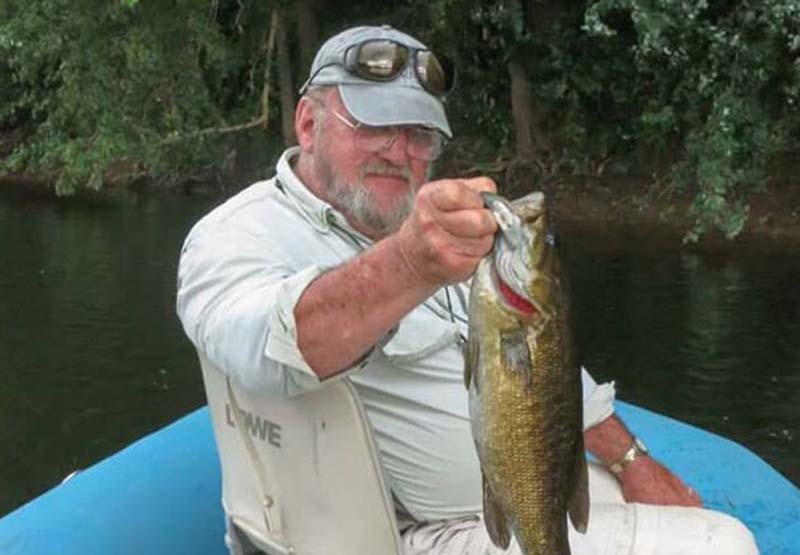 That’s him, Chuck Kraft – the guy Lefty Kreh and Bob Clouser called when they wanted a sure thing fishing for smallies. Reilly Rods image.

Topwater flies and lures will become more productive as summer approaches and April turns to May. Sometimes the bite can be tricky during the prime spawning month of May. During the spawn, smallmouth can sometimes refrain from eating actively. However, there are certainly fish to be caught in May as some smallmouth will spawn earlier than others. All in all, spring offers a welcome change from the slower fishing that occurs during the winter months. Strongly consider adding smallmouth to your list of favorite species to target as the trees bloom and the grass grows.

During hot, bright, summer days the fishing can be most productive early in the morning and again in the evening. I try to fish during these times as smallmouth will often be active during low light conditions and can get sluggish during the middle of a hot bright afternoon.

For fly fishing, 9 to 10 foot rods in the 6 to 8 wt range are best. A 9ft 5wt may work well on the smaller rivers across Virginia but you will want a heavier rod on our larger rivers. Heavier rods in the 7 to 8 wt range will also turn over some of the bigger bugs we tend to throw this time of year on floating fly lines. A 9ft tapered leader in the 0x to 3x range will work well depending on water clarity and flows. Fishing large poppers like Boogle Bugs or Walt Cary’s “Walt’s Bass Popper” will get the smallmouth going. The Surface Seducer Double Barrel popper by Martin Bawden pushes lots of water. Large foam cicada patterns, Japanese beetle patterns, and western style Chernoyble Ants are fun when fished tight to the bank. Don’t forget to include a few damselfly and dragonfly patterns in your summer smallmouth fly box.

Probably the least known legend in all of fly fishing today is Chuck Kraft. I took a few fly rods for a spin, an eight and a five that he had designed for Reilly Rods in Virginia while visiting an ICAST Show in Orlando a few years ago. Later, I was talking to Lefty Kreh, and he said that he, Chuck, and Bob Clouser spent time for years fishing Kraft’s smallmouth fishery and that Chuck Kraft knew more about fly fishing for smallmouth bass than anyone in the country. It dawned on me that Chuck likes things just the way, off the front page – happy to help anyone.

Although retired now, for decades, it would be much easier to get a guided trip from Jesus Christ himself than Chuck Kraft. His flies are the same way, they’re in all the top fly shops – Kelley Galloup [Slide Inn] brags about his fishing for trout on the Madison in Montana with the Kreelex fly, and author/guide/conservationist Steve Kantner [Landcaptain] says no self-respecting snook will turn its nose up at one either.