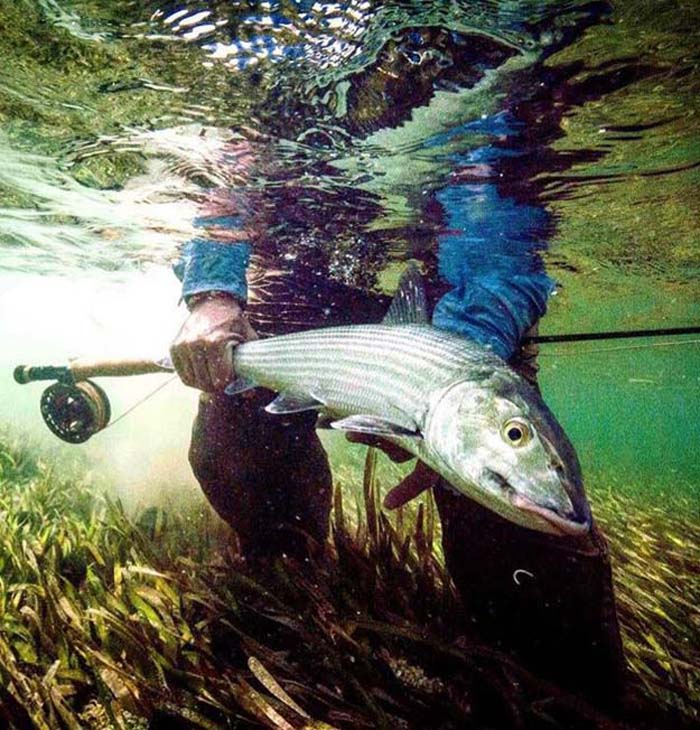 [dropcap]B[/dropcap]onefish and Tarpon Trust (BTT), in its third decade, has gathered an enormous amount of information about bonefish, as well as tarpon, and of late, permit.

We collected the battery of scientific knowledge from BTT’s scientific database and created the following assemblage of some interesting facts, like bet you didn’t know.

We limited our coverage to  Spookus  easyus, and we don’t attempt to present it as a “story.” More as of interest – facts about the iconic Albula vulpes. – Skip Clement

It is roundly believed that tobacco products, petroleum products of any kind or sunscreen are feeding deterrents to bonefish. Well, we can rule out one angler-perpetuated myth for sure –  sunscreen. That, thanks to Kelly Hannan, Aaron Shultz, Zach Zuckerman, and Chris Haak. All scientists with bonefish on their minds. An underwater shot of Albula vulpes (Spookus easyus) by Captain Brandon Cyr. Did you know bonefish kept out of the water for more than 15 seconds are six times more likely to die post-release?
Image provided by BTT.

Assess whether bonefish show an aversion to sunscreen-contaminated bait (fly). Bonefish were collected from nearby flats and held at Bahamas’ Cape Eleuthera Institute (CEI) wet lab for a series of observations on their feeding behaviors. Experimental trials consisted of supplying bonefish with shrimp handled with oxybenzone-containing sunscreen (conventional sunscreen), zinc-based sunscreen, or clean wet hands.

Researchers observed how long it took a bonefish to bite and spit the bait and measured the total weight of treated shrimp consumed. Results indicated that bonefish feeding behavior was unaffected by the addition of conventional and zinc sunscreens to the bait, and fish were neither attracted by nor dissuaded to consume the contaminated bait. They didn’t consume a different amount of shrimp when sunscreen was added and the time of their first bite did not change. Bonefish rely on their eyesight more so than olfactory cues to find prey. Here, an infection brewing from too much slime (mucus) removed. BTT photo.

Throughout the experiment, only two fish displayed evidence of bacterial infection following handling, and both fish were exposed to the zinc sunscreen treatment. Based on these results, anglers should consider avoiding handling of fish with sunscreen-coated hands, as well as with UV gloves.

Keep the bonefish in the water to avoid excess air exposure, and ensure your hands are wet to minimize mucous loss

For some reason, one difficult to explain, bonefish are of particular interest to the editor/owner and publisher emeritus of this magazine. We’ve both fished for them in distant places: Florida Keys; Isla de Culebra, Puerto Rico; Belize; Yucatan, Mexico; the Bahamas, Turks & Caicos, and the Seychelles.

NOTE 2: All of the information presented is sourced from Bonefish & Tarpon Trust’s magazine, blogs, newsletters, press releases and BTT’s Symposium Abstracts and Presentations.

Join Bonefish & Tarpon Trust and get everything firsthand and you’ll learn how to fish “mo-betta.”