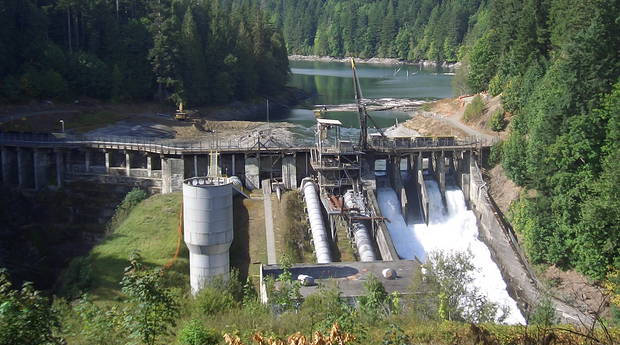 Strangled rivers, no salmon and no shad

Henry David Thoreau was prophetic in his apprehensions about dams. Though society has degraded rivers and reduced fish runs through pollution, overfishing and a host of other grievances, no single action has caused as much injury as the construction of barriers along their migratory routes. And decades of experimentation with engineered devices, like ladders to allow these fish to pass dams, have failed to reverse these declines.

[dropcap]S[/dropcap]ix years before he moved to Walden Pond in 1845 to ponder life and live deliberately, Henry David Thoreau spent two weeks canoeing rivers in Massachusetts and New Hampshire. The voyage was an epiphany for him.

At the time, the nation was becoming giddy with the promise of industrialization, an enterprise greatly dependent on rivers for power and waste disposal. But Thoreau, born 200 years ago on Wednesday (July 14), foresaw the ravaged futures of these increasingly commodified rivers. His book “A Week on the Concord and Merrimack Rivers,” self-published in 1849, offered his account of what was a two-week trip with his brother John.

Thom Glace’s commissioned work of the Atlantic Salmon (Salmo salar). Reprinted with permission. Click on image to visit his website.

Already in 1839 the water-powered wheels and belts of the Industrial Revolution were whirling fast. Though Thoreau was not yet well traveled in outdoors New England, his insights were distilled by watching the rivers’ migratory fishes. Dependent on clean and free-flowing water to swim upriver from the sea to spawn, these fish even then were being stymied by dams. He was so distressed by what he saw that he was stirred to ask a still haunting question: “Who hears the fishes when they cry?”

Two centuries later the answer is clear: not many. Once, rivers on the Atlantic coast “ran silver” with thrashing multitudes of ecologically and societally important fish like salmon, herring, and shad as they completed their grand life cycles. They ran so thickly that it was said one could walk “drishod” across their backs.

Accounts of early colonists marveling at the contrast between these unadulterated runs and the long-impoverished watercourses of their European homelands speak of abundances that would be difficult to imagine today. To these colonists, this bounty was an expression of Divine Providence. 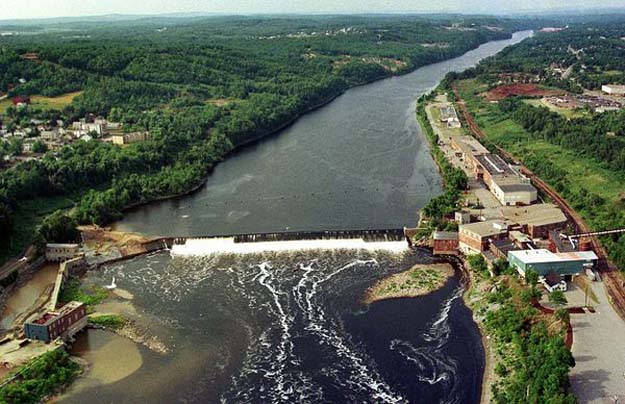 The Edwards Dam on the Kennebec River in 1993, before its removal. Click on image to read more.

Now, these same Atlantic rivers are fettered and tired, falling into the sea with the stilted tempo of the subjugated. Runs of the dozen or so river-sea migratory fish have, in many cases, been obliterated or reduced to fractions of their former plenitude. No longer ecologically relevant or societally important, they have become, in effect, “ghost fishes.”

A failed restoration program for salmon in the Merrimack was canceled in 2013, and the river’s sparse shad and alewife schools no longer color its waters silver each spring. In fact, the visitors center at a fishway in Manchester, N.H., that invites guests to “Celebrate the Magic of the Merrimack” has everything except abundant fish; in most years few reach that far upriver.

Atlantic salmon in all American rivers combined may have once reached a half million; in 2016, fewer than 600 were counted. On the Susquehanna River, the restoration target for American shad migrating past the fourth dam above tidewater to their historical spawning grounds is two million, a modest number compared with the natural run. But in recent years, fewer than 100 have made it that far up the river. On other rivers in the Northeast, the spawning runs are likewise depleted, down by as much as three to five orders of magnitude from early colonial times. 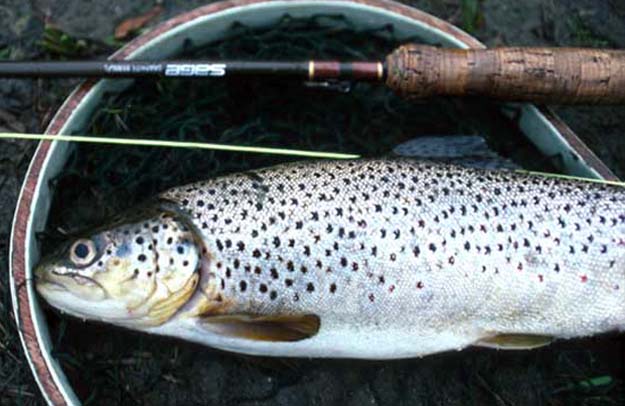 Kennebec River angler with a brown that knows no dam. Image courtesy of Tracewski Fishing Adventures. Click on image to visit website.

Thoreau was prophetic in his apprehensions about dams. Though society has degraded rivers and reduced fish runs through pollution, overfishing and a host of other grievances, no single action has caused as much injury as the construction of barriers along their migratory routes. And decades of experimentation with engineered devices, like ladders to allow these fish to pass dams, have failed to reverse these declines.

As Thoreau lamented, “Poor shad! Where is thy redress?”

The removal in 1999 of the Edwards Dam on Maine’s Kennebec River and the subsequent explosion in its fish populations offered an answer to his question, showing that these rivers can recover. Now that other energy alternatives are available, like wind and solar, society shouldn’t accept the presence of dams that produce nominal hydropower at the cost of the health of major Atlantic rivers

John Waldman is a biology professor   at Queens College and the author, most recently, of “Running Silver: Restoring Atlantic Rivers and Their Great Fish Migrations.”