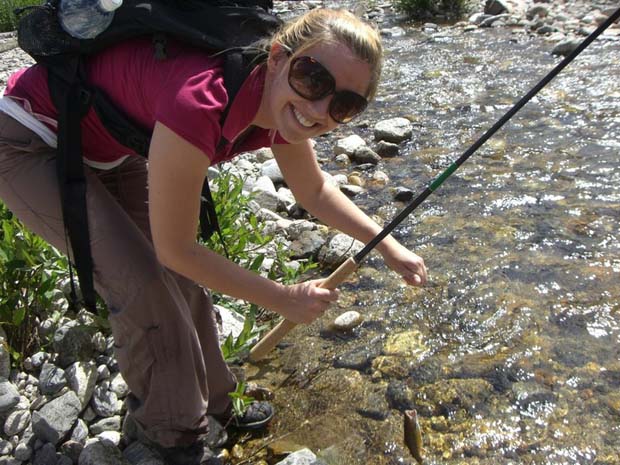 Tackle: Tenkara – is this Japanese form of fly fishing the very first? This yamame trout is native to the mountain streams of Japan. A decent angler would expect to catch a couple of dozen in a day. Photo Jason Klass

[dropcap]T[/dropcap]enkara has a long history, though little of it is documented. Fly-fishing in Japan is suspected to have been practiced as far back as the 8th or 9th centuries B.C. The first reference to tenkara fly-fishing was recorded in 1878,  a quick passage in the diaries of Mr. Ernest Satow, and English diplomat who lived in Japan, describing the sight of someone fishing for yamame at Mount Tateyama using flies.

Tenkara was originally the domain of commercial fishermen in mountain areas of Japan. These anglers used to catch fish for a living. The original tenkara angler would camp in isolated mountain streams, then come into the nearby villages to sell dried and fresh fish to inn-keepers and other people. Some people may have also used tenkara as a method of catching fresh fish.

Though there are a few different theories on the exact origins of tenkara, based on our research we strongly believe tenkara was originally and independently developed by these anglers and not passed on to them by other people. The original tenkara fishermen likely realized they could try to imitate bugs with feathers, silk, etc. At that point they quickly realized the great efficiency of using these flies (kebari) to “harvest” the abundant Yamame in the mountain streams of Japan. As opposed to using bait a simple fly would take seconds to tie and could catch several fish before ever being replaced.

The name tenkara, is written in Japanese Katakana characters (normally used for foreign words): Tenkara in Japanese –  you may notice the symbol in the Tenkara USA logo – the first character of tenkara: “Te”.  The most commonly accepted meaning is “from heaven” or “from the skies.” However, the original meaning, and its origins are not known for certain. It’s thought that the word came about because of the way a fly softly lands on the water, and if looked from a fish point of view, it would be slowly descending “from the skies”. However, there are other theories for the name tenkara as the Japanese writing system allows for multiple possible interpretations of the word based on the sound for tenkara. The term tenkara became popular in Japan about 30-40 years ago, prior to that it was known as tenkara in most areas, but also commonly called “kebari tsuri” (lliterally “fishing with a feathered hook”). Regardless of the origins of the name or possible interpretations, tenkara is just . . . tenkara.

NOTE: A tenkara rod is a fly rod. A tenkara rod is designed to cast line in fundamentally the same manner as a Western fly rod. While the casting stroke is typically shorter (10 o’clock to noon is used as a starting point instead of 10 o’clock to 2 o’clock), the principles of casting are the same with both types of fly rods, and the fly line forms a similar “loop” in the air with both tenkara fly rods and Western fly rods.

Not much has been documented about fly-fishing and tenkara in Japan because tenkara was primarily a source used to secure food, not a form of leisure or sport. However, it’s interesting to notice that similar styles of fly-fishing are or have been practiced throughout many regions in the world, such as Northern Spain, Italy, Slovenia, Russia, and others. Before reels became widespread, fixed-line fly-fishing such as tenkara was practiced in many parts of the world. Tenkara is the only method that has remained popular and continues to be practiced. For mountain stream fly-fishing all that is necessary is a rod, line and fly.