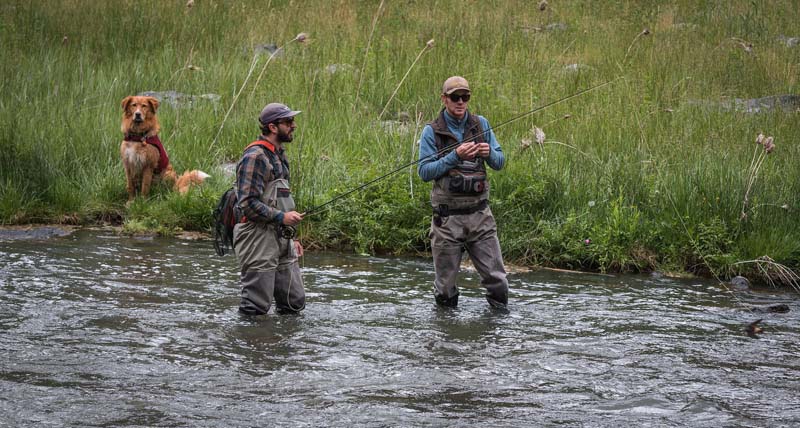 On a lighter side, Karen Rontowski, a popular mid-west comedienne, pokes fun at the Cowboy State

“If you get a chance to go to Wyoming, be very careful driving. I couldn’t see across the street. The air was so thick with boredom.”

In Wyoming, the fly fishing can be excellent, and Ernest Hemingway agreed

The western two-thirds of Wyoming is covered mostly by the mountain ranges and rangelands of the Rocky Mountains, while the eastern third of the state is high elevation prairie called the High Plains. The U.S. government owns almost half of the land in Wyoming.

Wyoming is a state with more radical views and beliefs than any other state. Republican thinking dominates, whatever that may now be, but certainly more akin to Cliven Bundy types than David Brooks.

Wyoming is home to the man who almost single-handedly got us into two wars based on his manufactured and completely false assertions about weapons of Mass Destruction. — Skip Clement, publisher

Why Wyoming’s public lands are locked up

The Cowboy State has more inaccessible public lands than anywhere in the West. 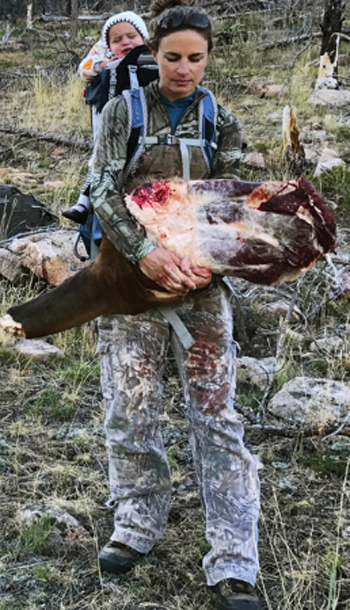 Christine Peterson has written about outdoor recreation, land and wildlife issues for the past decade from her home in Wyoming. Peterson is carrying an elk shoulder to her pick up truck with her daughter on her back. Not a soccer mom.

In mid-2016, a state of Wyoming website ran a notice detailing a proposed land exchange. Not many people bother to read such postings, and even fewer were likely to understand what the trade entailed on the ground.

But Buzz Hettick did, and he was alarmed:

The swap would have closed off access to 4,000 acres of prime elk-hunting land in a rugged stretch of southeast Wyoming. If it went through, the cut-off land would have joined the approximately 3 million acres of public land in Wyoming that are already inaccessible to the public. That’s an area roughly one and a half times the size of Yellowstone National Park, broken into little islands that are technically public but available only to those with permission to cross the surrounding private land.

The landowner said no one used that land anyway. The state wanted to acquire property with timber or possible outfitter leases it could sell to help pay for schools. But the outdoor recreation community went berserk.

Hettick, who is a volunteer for Backcountry Hunters and Anglers, a sportsmen’s advocacy group, spends hours every week chasing tips about trades where sportsmen lose access to large chunks of land. When he heard about this proposed deal, he and a couple of others began calling, emailing and reaching out via social media to the state’s hunting and fishing community. They sparked a wave of angry calls and emails to the land board, along with an online petition that garnered thousands of signatures. And they were successful; the state’s land board ultimately denied the trade.

Wyoming is not the only state with public land surrounded by private land, but a recent report commissioned by the Theodore Roosevelt Conservation Partnership showed that it has a disproportionate amount — one-third of the landlocked acreage in the entire Western U.S. How it got that way is complex: part industrialization and homesteading, part land swaps and road closures, part climate quirk. The fight for public access is an ongoing one, led largely by dedicated outdoor enthusiasts determined to read every land trade proposal, knock on landowners’ doors and petition in the halls of Congress.

“It’s up to each individual outdoorsman, a hunter, angler, backpacker, hiker, mountain biker, I don’t care who it is, it’s up to them to let us know,” Hettick said. “I’m done losing places to hunt and fish and recreate. I just am.” 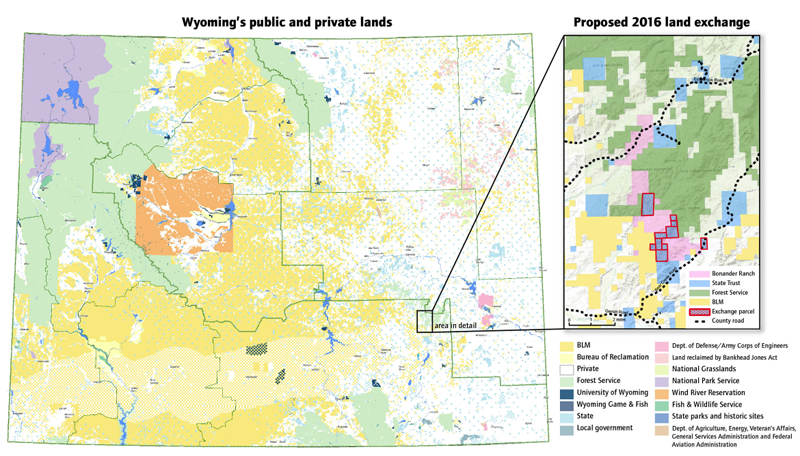 The land exchange would have closed off access to 4,000 acres of public land, and created even more limited access to other lands

Wyoming’s Land Patterns are often described as “patchwork,” evoking images of a quilt carefully stitched by a loving aunt. But spread out a map of Wyoming — with white, yellow, green and blue indicating ownership of private, federal, tribal and state land — and it looks like that loving aunt had a few too many hot toddies before she got to work.

The northwest corner is marked largely by the colors green and purple, a healthy dose of wilderness and national park and forest, and the southeast part is mostly white, indicating private land. A large orange area near the center denotes the Wind River Reservation. The rest of the state is a mix, with yellow spots showing Bureau of Land Management ownership, and blue, for state ownership.

The patchwork process began before Wyoming even existed as a state. An expanding federal government took land ceded under treaties, the terms of which were often not upheld, from the Shoshone, Arapaho, Lakota, Cheyenne and other tribal nations, and divided it into 1-square-mile sections. Then, to encourage the railroad to build, the federal government gave it every other square of land for 20 miles on either side of the Union Pacific’s planned route. Railroad companies could then borrow against the private parcels to help fund construction, creating a big, curvy stretch of white and yellow patchwork in an otherwise disordered quilt.

The 1862 Homestead Act and others like it further complicated things by allowing settlers to claim and eventually keep relatively small tracts of land formerly governed by tribes, as long as the newcomers built a house or made other “improvements.” “It was kind of a bet between you and the government that if you can stay on this piece of land for five years without starving, you can have it,” said Tom Rea, a Wyoming historian and editor of wyohistory.org.

This happened across the West, but Wyoming “hit the sweet spot of just attractive enough for settlement to break up the ownership pattern, but not attractive enough to become entirely private,” said Joel Webster, director of the Center for Western Lands at the Theodore Roosevelt Conservation Partnership. Wyoming was wetter and thus easier to settle than places like Nevada or Utah, but not quite as arable as states like the Dakotas, where most land is private. Seventy-five years later, about half of Wyoming is privately owned, the swaths of yellow, green and blue on the map slowly fading to white.

“I don’t think anyone thought about how people would access it,” said Wyoming Game and Fish Warden Dustin Kirsch. Those islands of inaccessible public land were seen as basically useless. For decades, users worked around the problem: A knock on the door or phone call often gave sportsmen and outdoor enthusiasts access to private ranch land. Ranching in the arid West is a tough business, though, and in the last 25 to 50 years many older family ranches have been split up or sold, said Jim Magagna, executive vice president of the Wyoming Stock Growers Association. Other ranches stayed together but leased the land to outfitters to help pay the bills. The result was the same: diminished informal access.

County road abandonments, combined with almost a century of divisive and often opaque land exchanges like the one Hettick protested in Wyoming’s Laramie Range, further complicated things. Counties have rights of ways and maintain roads that snake through private and public property throughout much of the West. Often, they’re the only paths connecting one piece of public land to another. But if a landowner successfully petitions the county to abandon a right of way through his or her property, the public is then locked out.

“It’s a simple decision (made) by the county commissioners,” said Jeff Muratore, a hunter who lives in central Wyoming. And few people pay attention to those decisions.

In June, landowners in southeast Wyoming asked the Laramie County Commission to abandon two county road easements that ran through their properties. Those roads also sliced through three parcels of BLM land that offered mule deer, pronghorn and even elk hunting. Hettick once again rallied public-land users, and it was ultimately denied. Then in October, a hunter in the Cody area alerted him to another road closure being proposed in the northwest corner of the state and it started all over.

Hettick believes these fights are a battle for the legacy of Wyoming and the West — a place where people can pull off just about any dirt road and camp or hunt without paying thousands for a private lease. This access is also vital to the state’s financial future, Hettick argues: Wyoming has a $3.5 billion tourism economy — second only to energy. 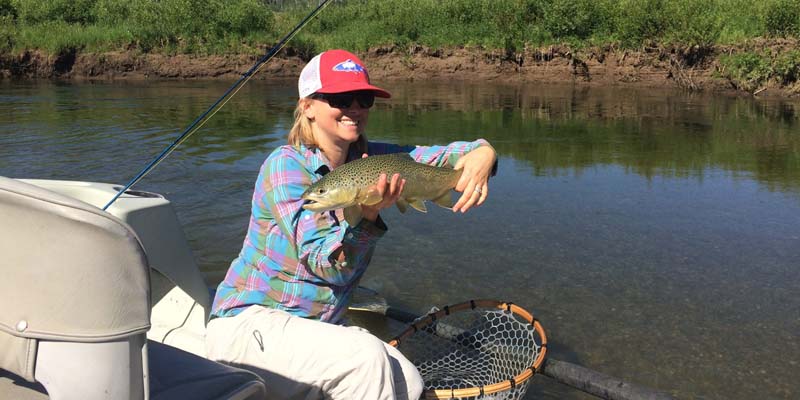 So sportsmen’s groups have gone beyond the on-the-ground fights. The survey commissioned by the Theodore Roosevelt Conservation Partnership and completed by GPS mapping company onX documented all landlocked land in 13 Western states and found about 9.5 million acres of locked-up land in the West. The Conservation Partnership is now using that information to push for legislation that provides more money to buy permanent easements or small sections that connect public parcels to existing access points, said Webster.

The state has its own program, called Access Yes, where Game and Fish pays private landowners for hunting access. But it isn’t permanent, and if Game and Fish doesn’t renew a contract, or the landowners change their minds, access ends. Similarly, the Rock Springs Grazing Association, which leases or owns many of the sections originally granted to the railroad, allows public access. But that, too, is at the discretion of the association, Magagna said.

A bill put forward in 2018 that would have secured funds for improving public access by permanently reauthorizing the Land and Water Conservation Fund — a $900 million pot of money from offshore oil and gas royalties used to improve outdoor recreation — died shortly before Christmas. Lawmakers proposed a bill with similar provisions in early January.

But even if federal funds help secure public land access, Hettick said, hunters, anglers, climbers and backpackers need to continue to stay vigilant: Access can evaporate in many different ways.

“One thing people didn’t understand in the past is how important the outdoor recreation economy is to the state. The world is shrinking. It’s pretty much that simple.” — Buzz Hettick

Join High Country News – it’s where all that happens in the west happens . . .