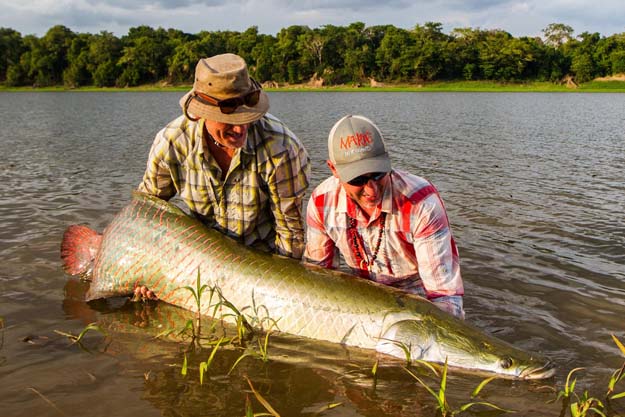 The Amazon’s biggest fish on a fly

[dropcap]T[/dropcap]he arapaima, pirarucu, or paiche are any large species of bonytongue in the genus Arapaima native to the Amazon and Essequibo basins of South America. It is also the largest freshwater fish in South America, arapaima (Arapaima gigas). It can grow to over 10-feet long and have been known to tip the scales at over 400-pounds (maximum recorded weight 440-pounds). Typically, gray in color – their bodies are wide with a tapered head. The longest recorded length was 15-feet.

Pirarucú is located within the Mamirauá Reserve, about 600 km west of Manaus, a complex of lakes and channels between the Solimões River and Japura River. Mamirauá was the first Sustainable Development Reserve in Brazil, legislated by the Government of Amazonas in 1996, and remains the largest arapaima reserve in the world. 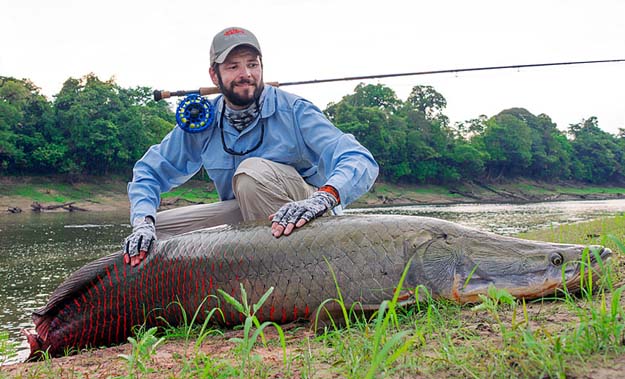 A happy traveler with over a 100-pound arapaima. Image courtesy of The Fly Shop.

Like most fish, the arapaima can breathe underwater, however, it also breathes air. With its one lung, the fish comes to the surface once every 5- to 15-minutes. And when it does surface, the arapaima emits a distinctive coughing noise, which makes it easy for fishers to find and kill them.

Commonly known as a paiche or pirarucu, the arapaima fish is a valuable commodity for fishers in the Amazon basin, who traditionally hunt the fish with harpoons in homemade canoes.

The arapaima is mainly hunted for its meat, but some indigenous communities also consume the fish’s tongue. Its large scales are also used to create jewelry and other items.

The arapaima will let you know when they are around (make noise when surfacing for air), but you’ll almost always be required to make long casts.

Travel lodges will say 40-feet – the signaling is the warning. If you can’t cast, bring a spinning rod. You’ll need to fly cast, comfortably, more like 70-feet. And that’s not so easy with a big, bushy fly. Sometimes, of course, the shorter cast is in play. 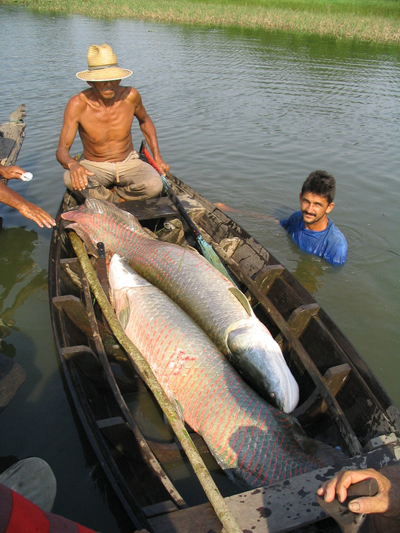 Telling the native people in the region to stop killing the arapaima has been a hard sell. But with the government dedicating millions of acres as a preserve, encouraging fishing lodge investments, eco-tourism and jobs have slowly proven to be the right message with local tribes. The image is of; local fishermen in their dugout with meat for the village. Image Credit: Leandro Castello, Virginia Tech/LiveScience.

Though this species was once abundant in the Amazon basin, it is now on the brink of extinction in some areas. However, researchers are hopeful that more stringent fishing regulations and other conservation efforts will bring arapaima populations back to healthy numbers in the future.

Source information LiveScience and below listed.