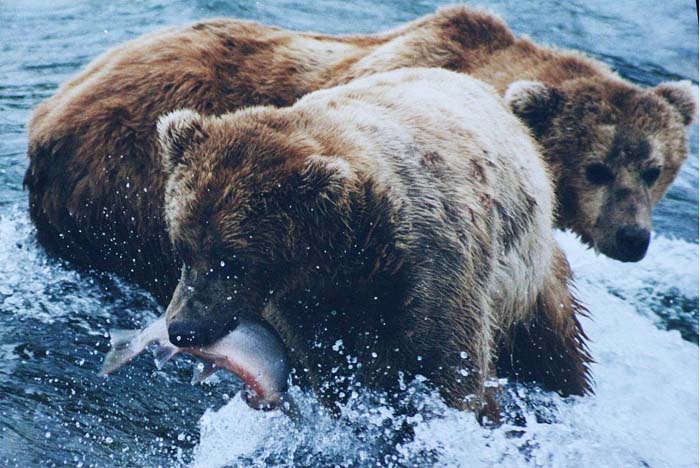 Brown bears getting high on salmon. A commons image.

Globally, salmon feed millions of people and are revered as the king of land-based game fish by thousand of  fly fishers; world-wide. Their symbiotic relationship with their spawning rivers, contiguous forests, Aves [birds], aquatic growths, other fishes, and land animals are all reliant, in some way or completely, on these Salmonidae. Take bears, for example.

The symbiosis between bears and salmon makes for an interesting observation

[dropcap]T[/dropcap]he stark images of malnourished grizzly bears on the coast of British Columbia have garnered widespread media attention. The photographs are difficult to view and strike a chord of deep concern in most people.

Raincoast Conservation Foundation has long advocated for a wildlife welfare ethic when it comes to the conservation and management of large carnivores. This approach becomes even more compelling when the life requisites, in this case wild salmon, of species such as coastal grizzlies are diminished as a result of human activities.

Much of the news coverage associated with the aforementioned situation has been linked to climate change, but this particular salmon-run collapse is likely the result of a suite of influences, not the least of which is the failure to protect wild salmon in B.C. from fishing pressure, habitat degradation, hatchery impacts, fish farms and more.

Wild salmon and grizzly bears have an intertwined relationship, and the choices we make are inextricably linked to their fates. When salmon are plentiful in coastal streams, bears thrive and produce more cubs. Grizzlies also occur at higher densities and grow to larger sizes when salmon are abundant.

When the number of salmon returning to spawn from their ocean migration is variable, fishery managers favour the short-term benefit of harvest, even when salmon abundance is low and even if it means forgoing larger harvests in the future. The federal Department of Fisheries and Oceans manages for spawner persistence, not for healthy, abundant spawning runs.

Despite the knowledge that many species depend on salmon, fisheries have never been managed with wildlife in mind.

Whether its bears, wolves or whales, many coastal species have evolved to rely on annual returns of Pacific salmon. But how are the food needs of these animals considered in fisheries management or the benefits of salmon managed for coastal ecosystems? Bottom line: they aren’t.”