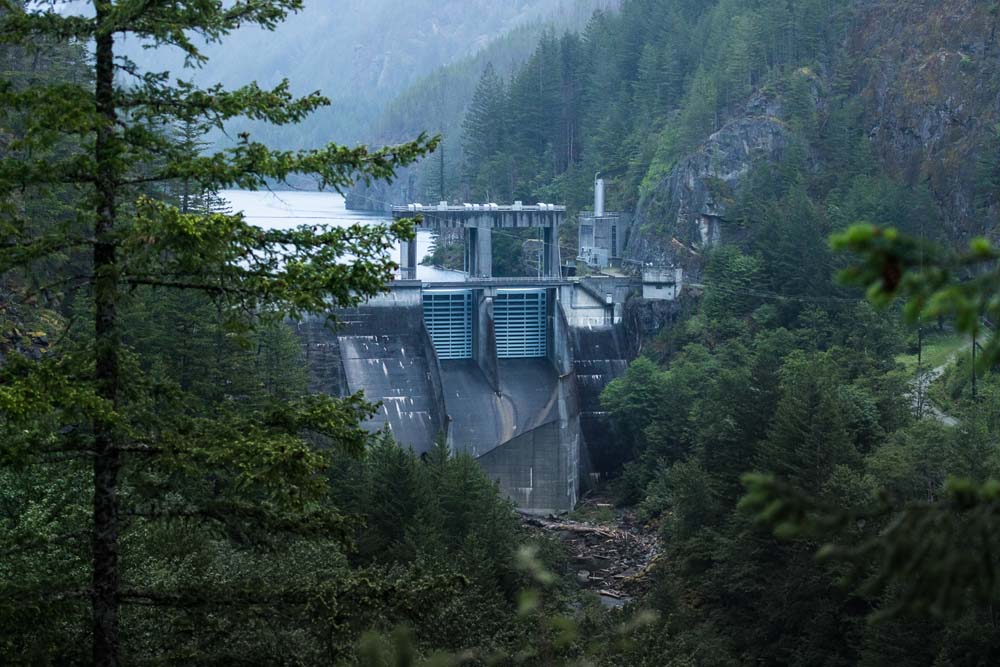 The losses of migratory freshwater fish have outsized consequences

Alaska’s sockeye constitute the world’s greatest run of salmons. The sockeye salmon [Oncorhynchus nerka] is an anadromous species of salmon found in the Northern Pacific Ocean and rivers discharging into it. This species is a Pacific salmon that is primarily red in hue during spawning. They can grow up to almost 3-feet in length and weigh 5- to 15-pounds. Juveniles remain in freshwater until they are ready to migrate to the ocean, over distances of up to 1,000 miles. Their diet consists primarily of zooplankton. Sockeye salmon are semelparous, dying after they spawn. Some populations, referred to as kokanee, do not migrate to the ocean and live their entire lives in freshwater. Johnny Armstrong photo for Wild Salmon center.

Decline in species such as salmon harms entire ecosystems and livelihoods, say researchers.

Populations of migratory river fish around the world have plunged by a “catastrophic” 76% since 1970, an analysis has found.

The fall was even greater in Europe at 93%, and for some groups of fish, with sturgeon and eel populations both down by more than 90%.

Species such as salmon, trout and giant catfish are vital not just to the rivers and lakes in which they breed or feed but to entire ecosystems. By swimming upstream, they transport nutrients from the oceans and provide food for many land animals, including bears, wolves and birds of prey.

The migratory fish are also critical for the food security and livelihoods of millions of people around the world, while recreational fishing is worth billions of dollars a year. The causes of the decline are the hundreds of thousands of dams around the world, overfishing, the climate crisis and water pollution.

The scientists said the situation may be even bleaker than it seemed, as many declines began before 1970. Populations of sturgeon in the Great Lakes of North America, for example, have dropped by 95% from historic levels. Furthermore, suitable data has not been gathered on species in some of the world’s most biodiverse rivers such as the Mekong, Congo, Amazon and Yangtze, where researchers fear there will be hundreds of fish extinctions in the coming decades.

The average fall in populations was 84% in Latin America, while there has been a 59% decrease in Asia-Oceania, although there is limited data there and not enough from Africa to determine any reliable trend. In North America, the fall was less dramatic, at 28%. This is probably because large declines occurred before 1970, but also as a result of a growing number of dams being removed.

“For migratory fish, there’s nothing worse than a dam,” said Zeb Hogan, at the University of Nevada and an author of the new report. He said the good news was that fish could return quickly: “Almost without exception, where dams have been removed, you see populations bounce back, often much more quickly than anyone anticipated.” 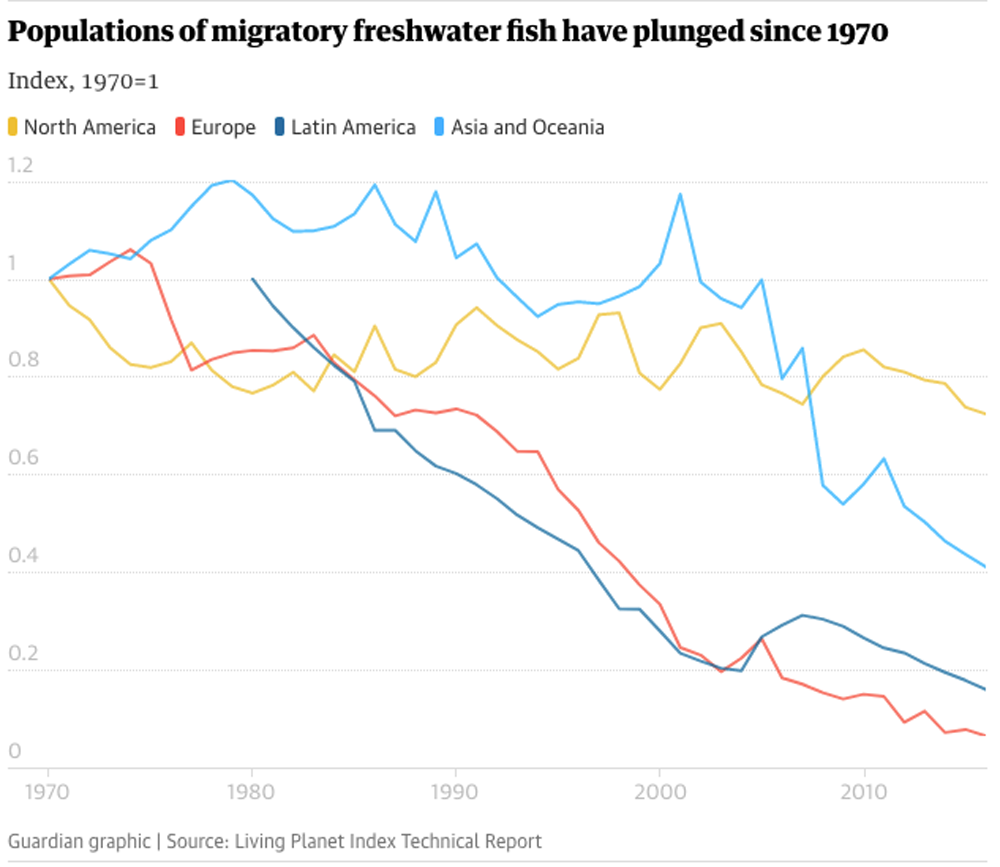 A river restoration completed by the Penobscot River Restoration Trust partners in 2016 on the Penobscot River in Maine, US, led to river herring numbers growing from a few hundred to nearly 2m a year. The Dam Removal Europe coalition is working to free the continent’s rivers from more than 100,000 obsolete barriers. But thousands of hydropower dams are being built in other parts of the world.

The decline in migratory fish populations is higher than that for land and ocean animals, whose populations have fallen by an average of 60% in the last 50 years. “Freshwaters are disproportionately at risk to human pressures, since they are affected by everything happening in the surrounding catchment,” said Jackson.

Previous research found many giant river fish are on the verge of extinction, with populations from catfish to stingrays down by 97% since 1970. Other studies have shown only a third of world’s great rivers remain free-flowing, while in Britain, for example, 97% of the river network has been interrupted by human-built structures. 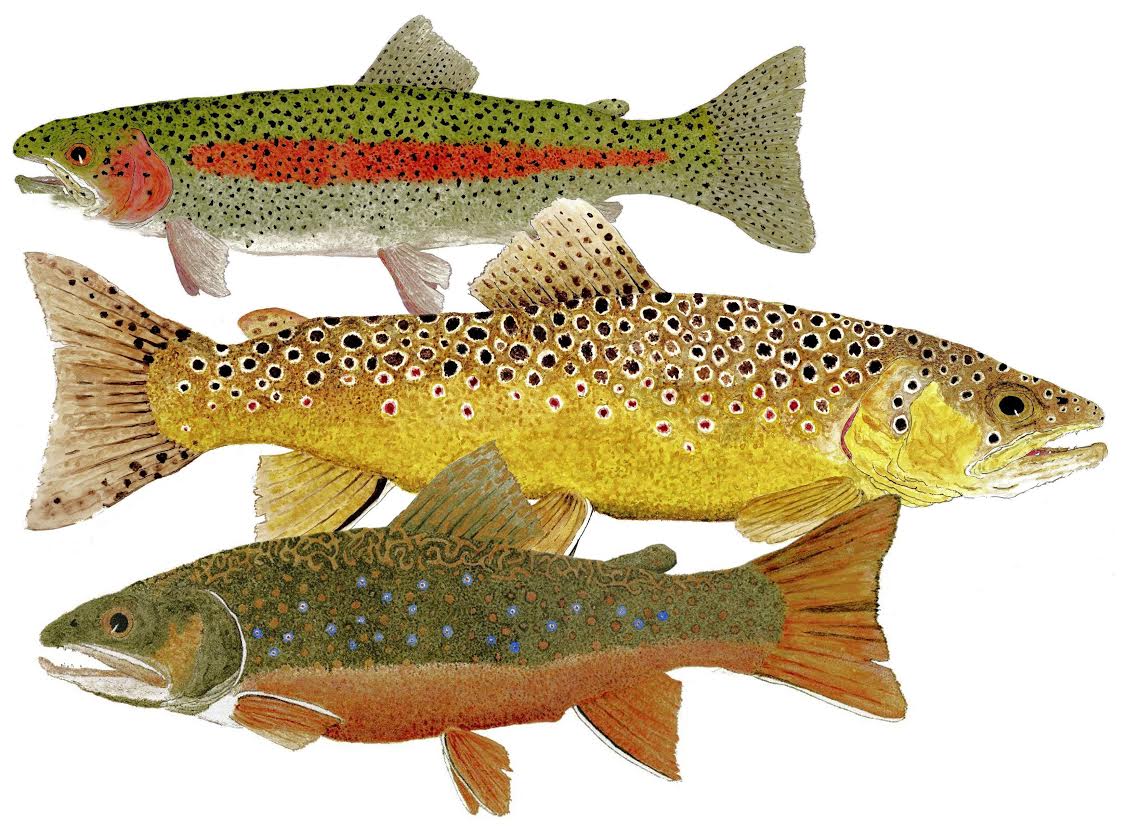