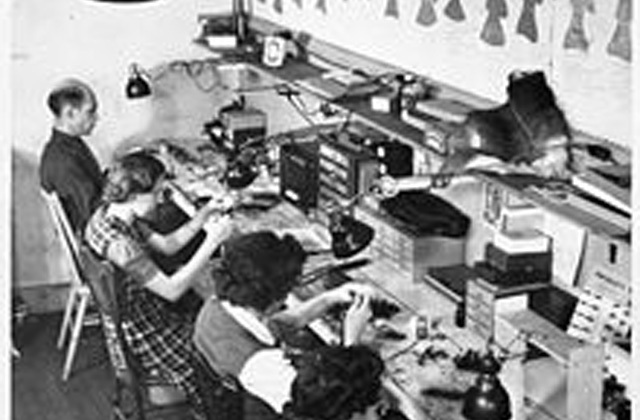 The Series: Important Women In The History Of Fly Fishing

Montana Fly Shops / This profile is specifically for the Dan Bailey Shop in Livingston and Sigrid Barnes of Pat Barnes’ West Yellowstone shop. The images that appear here are not those that are in the book “A Graceful Rise” by Catherine E. Comar.

[dropcap]T[/dropcap]he trout waters in Yellowstone National Park are considered some of the most beautiful in America. Since Yellowstone’s creation in 1872, angling has been an important part of its allure and an important part of its history. To maintain tourism, the park stocked many of its waterways with native and nonnative species from 1889 until 1955. One of the earliest articles written about fishing in Yellowstone was penned by Mary Trowbridge Townsend. Her article, “A Woman’s Trout Fishing in Yellowstone Park,” was published in 1897 by Outing magazine. The Goofus Bug, shown here, and the Soft Pillow flies were Sigrid’s patterns. Her signature was the sewing machine she retrofitted to aid in fly tying. An image is in Catherine Comar’s book, A Graceful Rise.

The small Montana town of West Yellowstone is located at the west entrance to Yellowstone. It catered to the anglers as they journeyed into the park. In 1946, Antrim “Pat” Barnes and his wife, Sigrid Barnes, opened the first year-round tackle and guide shop in West Yellowstone. Although Sigrid first learned the art of fly tying from Pat, she quickly became the main tier of the flies sold in the shop and is credited, alongside her husband, as the creator of the Soft Pillow and Goofus Bug patterns. Barnes is also remembered for the retrofitted sewing machine she used in the shop. This machine allowed her to increase her fly production. Sigrid Barnes retired in 1981, but continued to teach fly tying through the Federation of Fly Fishers and other educational programs in Montana; she currently lives in Helena, Montana. Near Yellowstone’s north entrance in Gardiner is the town of Livingston. Similar to West Yellowstone, Livingston became a popular location for anglers to stop before entering the park. In 1938, Dan and Helen Bailey ventured from New York to Montana and established Dan Bailey’s Fly Shop. The Bailey shop tied their own flies and sold them at the shop and through their mail-order catalog. Throughout the decades, local women have worked in the shop and tied the innovative flies developed by Bailey. As the flies from the shop became more and more popular, the tying operation increased in size, and by 1981 Dan Bailey’s Fly Shop was the leading American fly manufacturer. The shop is still in operation under the ownership of son John Bailey.