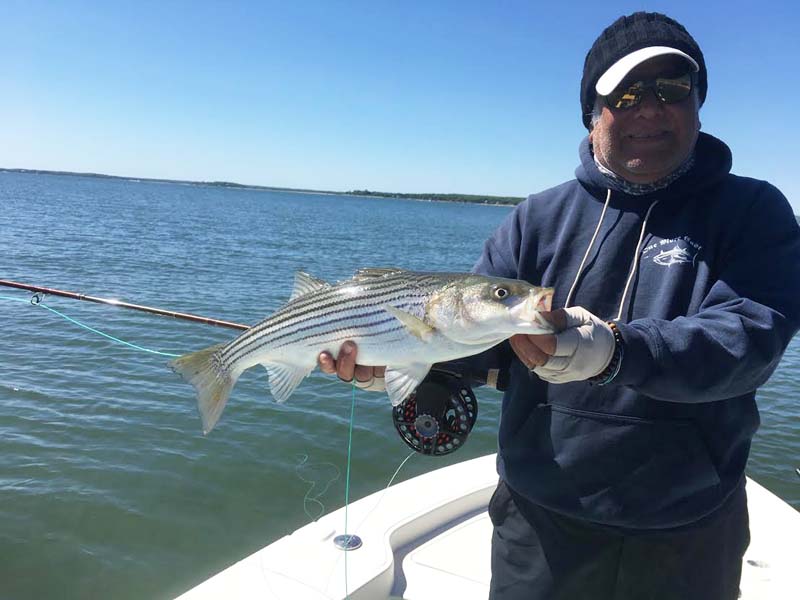 The size will matter in striper water on the Eastern Seaboard

Another Eastern Long Island, NY, flats striper [Morone saxatilis] caught by Capt. Andrew Derr‘s regular client and ready for release. The IGFA World Record Tippet class  is 64-pounds in OR  in 1973 (12-pound test) / All Tackle – 81 lbs. 14 oz., Long Island Sound in 2011. All the top professional fly fishing and light tackle guides’ anglers in Eastern Long Island are 100% release. They all believe in the conservation of a valuable resource and want to fix problems – not be the problem. Capt. Derr is a published author, columnist, and former editor. Derr photo.

“Our findings provide empirical evidence supporting the recent decision made by the Atlantic States Marine Fisheries Commission to direct Atlantic coastal states to eliminate minimum size restrictions for striped bass in 2020 and instead impose a slot limit of 28 to 35 inches to reduce spawning stock mortality. The commission has primary management responsibility for the Atlantic coast striped bass fishery.”

Another nice on – NOAA image.

Commonly called stripers, Atlantic striped bass are among the most prominent and heavily targeted recreational species in the United States. The highly migratory fish can live for up to 30 years, grow up to 5 feet long and weigh more than 75 pounds. They are caught from boats and from shore from the Gulf of Maine to Albemarle Sound in North Carolina.

In 2017, nearly 18 million angler fishing trips targeted or caught striped bass, representing 9 percent of the angler fishing trips in the entire country. Striped bass harvest, by weight, was the largest of all recreationally targeted species in the nation. However, in 2019, a new benchmark assessment found the stock to be overfished and experiencing overfishing.

“Anglers place a relatively high value on catching trophy-sized stripers – fish that are about 34 inches or longer in total length,” said Andrew Carr-Harris, an economist at the Northeast Fisheries Science Center in Woods Hole, Massachusetts and co-author of a January 2020 study with center colleague Scott Steinback. “But trophy-sized stripers are almost exclusively part of the female spawning stock, and if too many are removed from the fishery the stock has trouble rebuilding.”

High levels of removals were found to have contributed to a steady decline in the numbers of female spawners during the last decade. A mandated harvest reduction in 2015 from two fish to one fish, 28 inches or longer, to achieve the desired mortality rate did little to increase the female spawning stock. In 2017 the stock was estimated at a roughly 25-year low. 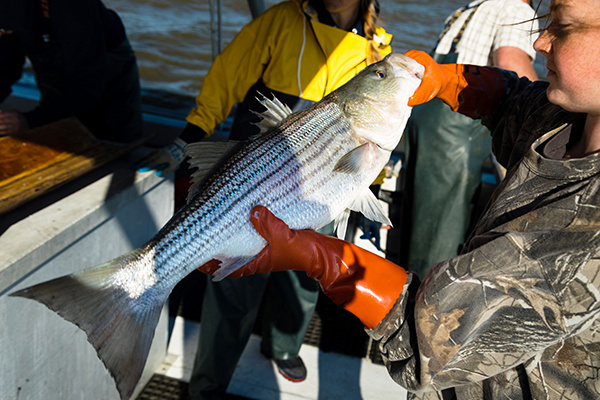 A volunteer carries a striped bass during the annual striped bass spawning stock survey in the northern Chesapeake Bay.

Given heavy fishing pressure on the species, fishery managers must make tradeoffs between achieving conservation objectives and satisfying angler demands when designing policy.

The researchers wanted to better understand what policies might work to rebuild the fishery while minimizing adverse impacts to anglers. Carr-Harris and Steinback evaluated the immediate economic and biological impacts of different types of recreational Atlantic striped bass fishing policies. Results of their study were published in Frontiers in Marine Science.

The first step was understanding the drivers of individual angler behavior. They used data from a choice experiment survey of 469 recreational anglers that fish in coastal waters from Maine through Virginia. Those survey results were then integrated into a model. The model simulated the aggregated effects of policy-induced changes in trip expectations on:

This approach allowed the researchers to examine the immediate economic and biological consequences of full or partial harvest restrictions on trophy-sized striped bass. To date, these restrictions have not been considered jointly in policymaking. 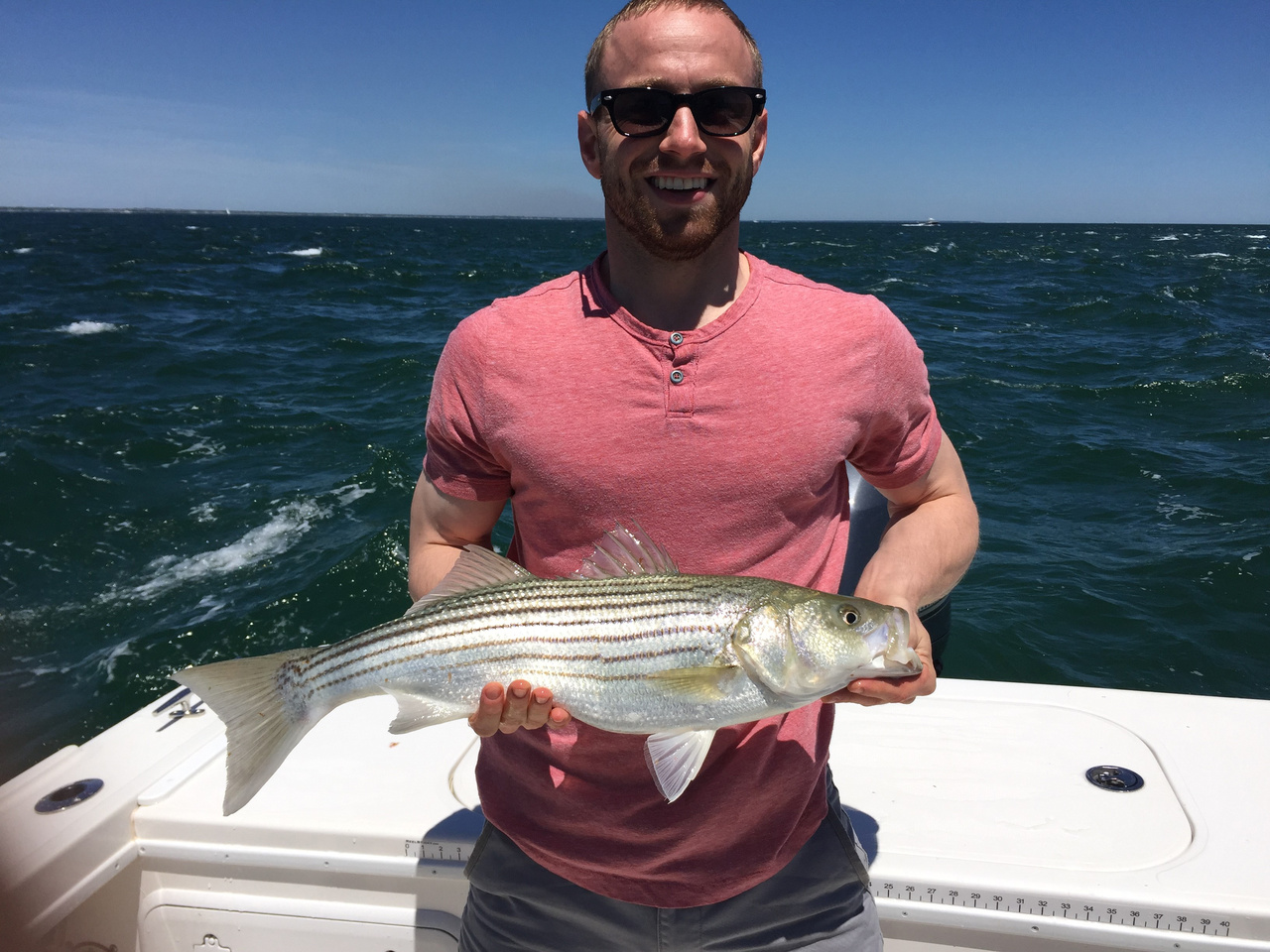 Carr-Harris with his first striper, caught off Cape Cod.

“We found that there are many economically efficient management policies available if the primary objective is to control fishing mortality, but few policies if the primary objective is to protect female spawning stock biomass,” Steinback said. “Of the 36 possible policies we evaluated, only one achieved the intended reduction in fishing mortality while at the same time mitigating removals of the mature females.”

That policy was taking one-fish per trip in the “harvest slot” of 28 to 36 inches. Harvest slot policies specify both a minimum and maximum size limit. Carr-Harris and Steinback found that implementing that policy achieved a significant reduction in both total and female spawning stock removals. These changes were relative to the 2015 policy of allowing one fish, 28 inches or longer per trip. This policy produced only a slight reduction in angler welfare, due to the relatively low rate at which trophy striped bass larger than 36 inches are encountered. The researchers concluded that additional consideration for this or similar striped bass slot limits is warranted.

The researchers feel strongly that policies should consider both the biological and economic consequences of recreational striped bass fishing. This increases the likelihood that conservation objectives will be achieved while simultaneously maximizing the well-being of anglers.