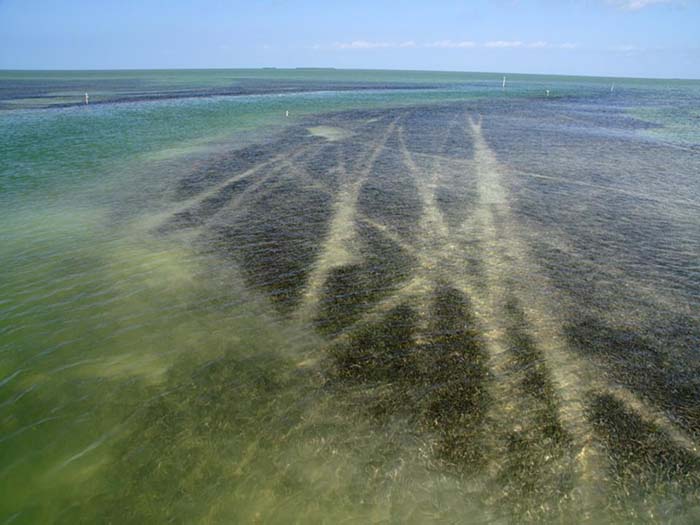 This grass will perk up your fly fishing game, right now

Despite their name, seagrass are actually not ‘grasses’ at all, as they do flower. Like land plants, seagrass produce oxygen. The depth at which seagrass are found is limited by water clarity, which determines the amount of light reaching the plant. Light is required for the plants to make food through photosynthesis. Florida Bay Restoration/NOAA image.

By Skip Clement and Capt. Andrew Derr with excerpts from “Fly Fishing the Florida Keys”

[dropcap]S[/dropcap]o, the seagrasses are as far as you can see and they are catching your flats booties and it unsteady’s you – distracts you. You sink in every few steps, and it’s hard to get out without losing a wading shoe or falling. You wish the damn stuff were not there and it would be more like yesterday morning’s out of the skiff to only inches deep water, hard packed white sand.

Well, if your wish were granted, you could get a nice tan, or worse, a sunburn, but never a bonefish. No chance for a permit, and fuhgeddaboudit tarpon.

Why do you think the bonefish are there in that seagrass you wish would go away? To find a boyfriend – meet up? Practice cruising skills? Hang with their buds in shallow water and risk life and fin with limited escape routes and get pickoff by a barracuda? Nah, you know better than that. Don’t you?

Flats seagrasses are what tarpon, bonefish, snook, redfish and many other species of game fish use as a tidal opportunity to feed

Every flats guide in the Florida Keys, and the Bahamas is a jealous guardian of seagrasses. Those who dare to abuse seagrasses, or disregard them when boating, are likely to hear about it. To flats guides, robust watery fields of seagrasses are a grant of a continuance

Without seagrasses there are far fewer and, possibly, no bonefish, shrimp, redfish, crabs, permit, spiny lobster or a long list of seasonal show-up species. For fish, seagrasses are a nursery and repository of a most useful by-product of mangrove; detritus nutrients.

Seagrasses serve the environment in many ways

They host over 100 species of algae, more than 130 species of animals; not counting fish, which there are an additional hundred or so known species. They are also primary to pink shrimp, mollusks (conch) and other crustaceans (other shrimps, several varieties of crab, and lobster).

Seagrasses are also a principal component in aiding water clarity and stabilizing the seafloor. They perform the latter functions by baffling wave action, trapping naturally suspended sediment with their long leaves, and anchoring their roots deep into the bottom, which aids the advance of more grass.

The reduction in suspended sediment also improves the process of photosynthesis, which has a ripple effect that reaches all the way to the reef tracts. The clearer the water that makes its way to the reefs during a tidal exchange, the more beneficial it is in the promotion of growth and overall health of the corals, as well as seagrass itself.

Of 52 known species of marine grasses in the world, only four are part of Florida’s waters and three in the Bahamas

Three, however, are primary to the Keys and Bahamas: manatee-grass (Syringodium filiforme), shoal grass (Halodule wrightii), turtle-grass (Thalassia testundinum). Widgeon-grass (Ruppia maritima) is the fourth Florida seagrass, and it is not common to the Bahamas. Shoal and manatee grasses are pioneer grasses that can establish growth in soft sandy bottom terrain that turtle grass cannot. However, once the forerunners create growth, then turtle grass will introduce itself and, usually, takes over.

A sediment plume is as harmful to seagrasses as prop dredging itself because it too can also cut roots (rhizomes) that anchor as deep as 5-feet.

Dredged seagrass paths are a sure sign of abysmally ignorant boaters, who have raped everyone’s fishing future. Seagrasses are disappearing from the Florida Keys at an unacceptable rate. Guides in the Keys state that acres and acres of propeller and plume damage to seagrasses are almost always caused by casual boaters, jet-ski operators (practically all personal watercraft operators are clueless according to guides) and novice sport fishermen boaters who are both impatient and unfamiliar with where they are, what they are getting into, or doing.